What is a Broken Jaw?

A broken jaw is caused as a result of an injury or trauma to the jaw. It is a common form of facial injury and it may range from mild soft tissue damage to multiple fractures. Skill and expertise are required in the management of mandibular fractures.

Anatomy of the Jaw:

The jaw consists of the lower jaw or mandible and the upper jaw or the maxilla. The mandible is movable while the maxilla is fixed.

Anatomy of the Mandible:

The mandible or the lower jaw is shaped like a horseshoe, with the ends flattened and projecting upward. The horizontal arch of the mandible holds teeth and blood vessels and is thick in the front, forming the chin. The evolution of the chin is unique to humans and is not present even in the great Apes. Recent ancestors of humans like the bonobos have chins.

At the sides of the head, the projections of the mandible are attached to the temporal bone. These projections are called Rami and they also support muscles that are responsible for chewing.

Anatomy of the Maxilla:

The maxilla or the upper jaw is fixed to the bones of the face with its upper arch containing the upper set of teeth.

In human fetuses and infants, the upper and the lower jaw are present as two separate halves that fuse together in the midline within a few months after birth.

About the joint- Temporo-mandibular joint:

The temporo-mandibular joint has three articulations

These three surfaces are separated by an articular disc. The joint is, therefore, split into two synovial cavities.

Trauma to the temporo-mandibular joint region can result in:

What is the Power of a Bite?

The power of a bite is applied near the joints while the actual function of the bite is performed in the extremities of the jaw. Therefore, for a ten-pound bite, the human jaw muscles need to contract 40 pounds.

Dr. G.E. Black from the Chicago Dental University developed an instrument to test the power of a bite. This instrument, called the gnathodynamometer, was used to test the bite of people from all walks of life. The bite forces varied for different people, depending upon the kind of food they ate and their biting, chewing habits.

Chewing requires a lot less force as the food is ground by teeth all across the mouth.

The ability to bite is taken as an important reference for the diagnosis of a jaw fracture as the patient will be unable to hold a bite or would find it extremely painful to bite.

What are the Weak Areas of Jaw?

The weak regions of the mandible are determined by two factors:

Considering these factors, the weakest sites of the mandible are:

What Are the Different Mandibular Fracture Types?

There are two joints that connect the lower jaw to the skull called the temporo-mandibular joints and injury can lead to:

A broken or dislocated jaw can be treated and fixed after intervention strategies but there are high chances that it could break again.

What Are the Causes for Broken Jaw?

The causes for mandibular jaw fracture are,

What is the Significance of Road Accidents and Mandibular Fracture?

A study conducted by Kolli Yada Giri and colleagues aimed at determining the etiological factors behind the high incidence of mandibular fractures in the Rohilkhand region, Uttar Pradesh. This study published in the Journal of Oral Biology and Craniofacial Research found that out of the cases of mandibular fractures, a considerable number were caused due to road accidents.

Incidents that cause Mandibular Fracture

Spontaneous mandibular fractures occur without the application of a traumatic force and commonly due to:

What are the Symptoms of Broken Jaw?

A broken jaw is normally caused due to trauma to the region and leads to immense pain in the region. The other symptoms of a broken jaw are:

What is the First Aid for Broken Jaw?

A fractured jaw requires immediate attention as excessive bleeding could lead to further complications. Another major complication that could arise is difficulty in breathing.

The jaw should be held in place with hand or with a bandage that runs over the head and below the jaw. This bandage should not be tied too tight as the patient may have to remove it in the event of vomiting.

The patient should be rushed to emergency to avoid any complications. Some patients may require a tube to be inserted into the throat if there is difficulty in breathing. Ice packs may be placed at the sight of swelling to prevent further swelling.

What is the Treatment for Broken Jaw?

A broken jaw is treated using corrective surgery. An x-ray would reveal the site of break and if there are multiple breaks in the bone.

The patient is administered with general anesthesia. A surgical cut is made on the gums to reach the site of the broken bones. The broken bones are fixed together using metal plates and screws and then the gums are sutured.

An additional bone may be required for some patients and this bone is taken from the ribs, hips or legs.

In certain cases, an additional cut may be required at the angle of the jaw and this is also sutured together. The sutures will be removed a few days after surgery.

Metal braces are attached to the teeth and elastic bands fixed. This will allow the jaw to heal and will also let the patient move the jaw after surgery.

The metal braces and elastic bands will be removed 4 to 6 weeks after surgery.

Patients will be on a liquid to soft solid diet for a few days after the surgery till the jaw heals and the patient is able to swallow food.

The site of surgery should be kept clean to avoid infection while follow-up visits to the doctor are mandatory.

What is Computer-Aided Mandibular Fracture Reduction?

Prior to the advent of computer aided technology, doctors relied on 3D models that were hand crafted. These were rudimentary and basic models which did not have accuracy. Now, computer aided laser sintering offers improved versions which are:

What are Biodegradable Plates and Screws?

Plates and screws are used to fix fractures in adults. However, in children, since they are still in the growing phase of their life, growth and natural healing processes would require secondary surgery to remove the plates.

A study conducted by Mazeed to assess the use of biodegradable screws and nuts for pediatric cases that fractures healed well without any serious complications. The advantage of using biodegradable plates and screws are:

Since most of the broken jaw incidences occur after road accidents, it is important to:

Apart from injury during road accidents, fights with others are also prime causes for a fractured jaw. Choosing friends wisely and staying away from fights will do the jaw and your health good.

Latest Publications and Research on Broken Jaw or Mandibular Fracture

Fibrous Dysplasia
Fibrous dysplasia is a condition with abnormal growth areas in one or more bones, where normal bone is replaced with fibrous bone tissue.
READ MORE 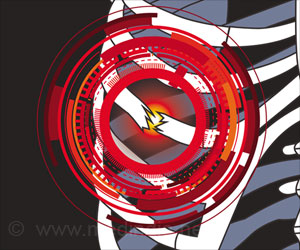 Broken or Bruised Ribs
A rib injury also known as rib fracture, is a crack or a break in one or more of the twelve pairs of bones that form the ribcage.
READ MORE
Sign up for Wellness Consult a Doctor Sign up for Selfcare