Lymphedema is a persistent swelling of the lymph system that occurs as a result of cancer, injury to lymph nodes or lymph vessels, lymph node removal or surgery, birth defects, radiation, infection, or cancer treatment.

So, what happens in lymphedema? As the name suggests, it is a condition that affects the lymphatic system. There is a buildup of fluid or the absorption of fluid is inefficient in soft tissues of the limbs (arms, legs) due to a block or damage to the lymph system. The fluid is unable to drain out. Sometimes other organs, such as head, neck, are also affected. (1✔)

Structure of the Lymphatic System

It is a circulating system that contains protein-rich lymph fluid, which collects bacteria, viruses and waste products. This fluid secretes out of the lymph tubes into different organs while the harmful substances in these organs are taken in by lymph vessels and transferred to the lymph nodes. The lymph nodes contain the infection-fighting cells called the white blood cells or lymphocytes, which filter the harmful substances and expel them out of the body.

What are the Types of Lymphedema?

Depending on the cause, lymphedema is classified into primary and secondary lymphedema.

Primary Lymphedema  This form of lymphedema is not directly attributable to another medical condition. There are three types of primary lymphedema:

Secondary Lymphedema  This is an acquired lymphedema and results from damage to the lymphatic vessels and/or lymph nodes. It can also be due to a functional deficiency. Secondary lymphedema is far more common than primary lymphedema.(2✔)

What are the Causes of Lymphedema?

What are the Symptoms of Lymphedema?

In secondary infections like cancer, the swelling may occur many years following the treatment.(4✔)

How do you Diagnose Lymphedema?

When lymphedema is in the advanced stage, the diagnosis is accurate due to the clear clinical symptoms involved. In the early phases of the disease, due to intermittent edema or swelling, it is difficult to establish the diagnosis of lymphedema. The basic diagnostic process involves a medical examination, imaging of the lymph vessels and nodes, imaging of the soft tissues, measuring the changes in electric conductance, measurement of the volume of edema, genetic tests, and imaging of the blood vessels.

Isotopic lymphoscintigraphy  This technique is the most reliable method to assess the integrity of the lymphatic system. It can also detect the peripheral lymphatic system, large lymph vessels, lymph nodes, and the main lymph vessels. However, it is unable to detect the internal transport vessels. Isotopic lymphoscintigraphy uses a radiolabelled tracer (e.g., 99mTc-rhenium sulphate) that is injected into the skin (intradermal or subdermal) between the digits (fingers or toes). A gamma camera helps to visualize the route of the tracer and the radiation can be quantified. Stress tests are suggested to obtain reliable results. This technique is used to detect primary lymphedema while it is not needed for secondary lymphedema when there is a clear diagnosis.

Other Tests  There are additional tests that are in use although they are not confirmed diagnostic techniques. For example:

Near Infra-Red Fluorescence Imaging (NIR)  Indocyanine green is introduced into the skin and the green dye is detected with an infrared fluorescence camera. It gives a real-time assessment of the lymphatic system including the small lymph vessels. Any potential swelling can also be detected, and hence, the condition can be identified at an extremely early stage. However, this technique is still in its infancy and used only in research centers.

Imaging of the Soft Tissues  MRI, Computed Tomography, and Ultrasound:

Magnetic Resonance Imaging (MRI)  Limb edema can be diagnosed using MRI. Identification of the different types of lymphatic system obstruction in secondary lymphedema is made easier with MRI. Similarly, affected lymphatic trunks and lymph nodes can also be identified. Since this technique gives information on the structural integrity of the lymphatic system, it is used to complement the data obtained from isotopic lymphoscintigraphy.

Computed tomography  This is another technique that is used to visualize the structure of the lymphatic system and to identify the location of the edema along with the typical thickening of the skin and a honeycomb pattern of the tissue. One of the uses of computed tomography (CT) is to monitor the effect of therapy on an area affected by lymphedema. Following treatment, the changes in the thickening of the skin and the anatomy of the lymphatic system can be determined.

Electrical Conductance: Electrical conductance is used to measure the water content in the body. However, it cannot distinguish other edemas from lymphedema.

Measurement of Volume: This technique has been in use for many years when the volume within a swollen arm or leg is measured. This technique can confirm the presence of lymphedema. The measurement is carried out in 3 different ways: displacement of water, measurement with tape, and perometry. Displacement of water measures the water displaced after the swollen organ is dipped in water. Measurement with tape is often done for head and neck lymphedema. Perometry uses an infra-red electronic scanner along with a computer to measure the volume of fluid in the affected organ. Perometry is sensitive up to 3% of the accumulated fluid. Volume measurements are used to understand the effect of a drug on lymphedema. It is not used as a confirmatory diagnostic technique.

Genetic Tests: These tests are useful for patients who have primary lymphedema. The tests can reveal the type of chromosome affected. For example, the FLT4 gene in Milroys disease.(5✔)

How do you Treat Lymphedema?

Lymphedema is a chronic and progressive condition; it may remain for the entire lifespan of an individual. The complete / complex / combined / comprehensive decongestive therapy (CDT) manages this condition by reducing the buildup of fluid and edema in the lymphatic system. The treatment is in 2 phases.

In phase I, CDT is performed daily for 3 to 8 weeks to reduce the swelling.

In phase II, the patients are given a regimen to follow that includes lymph drainage, skin care, compression devices, and exercises. Regular monitoring and replacement of compression devices are required to maintain the success of the treatment.

Conservative Physical Therapy or Complete Decongestive Therapy  The conservative therapy includes a manual massage and bandage-related decongestive lymphatic therapy (DLT). In the DLT, exercises, massage, and compression therapy are conducted. Physiotherapy is recommended to improve the flow of fluid through the lymphatic system. The patient is massaged (manual lymphatic drainage - MLD) so that the flow of fluid in the lymphatic system is redirected from the blocked passage to another route. An elastic non-distensible bandage (compression device) is applied to the area to enhance the flow of fluid during exertion and to prevent the accumulation of the fluid. The MLD therapy has been found to be effective and safe in improving the flow of fluid. It is widely used in Europe, Australia, and now in the United States.

Exercise  It has been seen that exercise helps relieve the symptoms of swelling. It is also suggested that compression bands should be worn during the exercise. Also, the exercise program is individualized based on the patients type of lymphedema.

Compression Devices  These are elastic but nondistensible devices, such as stockings or sleeves that exert a lot of compression (a maximum of 80 mmHg) to prevent the accumulation of fluid in the lymphatic system. As mentioned earlier, these devices are used following massage or other decongestive treatments. LegAssist, CircAid, and Reid sleeve are some examples.

Intermittent Pneumatic Compression  These are pumps that are single or with multiple chambers. The pumps are used to remove excess fluid from the leg and is either used as a primary mode of treatment or as an additional form of treatment. There are complications where excess pressure damages the lymph vessels.

Issues with DLT  In the initial stages of lymphedema, DLT has been found to be effective with appropriate exercise, use of bandages with MLD, and appropriate skin care. However, DLT is not very effective in the advanced stages. There are risks of thrombosis or internal metastases in the blood vessels due to the MLD therapy.

Drugs  Drug therapy varies with underlying condition that causes lymphedema. Sulodexide, coumarin, and flavonoids are some of the drugs used. Ivermectin, diethylcarbamazine citrate are used to treat filaritic lymphedema (commonly known as elephantiasis transmitted by the filarial parasites). Diuretics maybe prescribed for those patients who have heart disease or blood pressure.

Hygiene  Appropriate hygiene must be practiced to avoid the spread of infection (e.g., bacteria and fungi). Nails and skin should be kept clean.

Heat Therapy  In this therapy, heat is used to reduce the swelling. In China, where this therapy is popular, heat is applied for 30 to 45 minutes each day for 15 days, and a significant reduction in the swelling has been observed.

Other surgical treatments include lymphatic microsurgical preventive healing approach where a connection is created between the axillary vein and the lymphatic system of the arm. The technique appears to be effective for a period of 15 years.

Debulking operations involve removing the sections of tissue that have become swollen and thick. This procedure, however, can affect the surrounding lymphatic vessels. It can also lead to infection and further edema buildup.

Transfer of tissue means the transfer of lymphatic vessels to a congested location. However, it is not clear how effective it is.

Liposuction removes excess fat specially in areas of lymphedema. The body has a tendency to deposit fat in areas affected with lymphedema. Liposuction does not cure lymphedema but it can reduce the size of the affected limb.

Latest Publications and Research on Lymphedema

Blood Test Accurately Detects Lymphedema
A set of proteins discovered by scientists accurately flag the presence of lymphedema. The findings, to be reported Dec. 18 in PLoS ONE .
READ MORE

Early Physiotherapy of the Arm After Breast Cancer Surgery Reduces Lymphedema
Clinical trial recommends that early physio can reduce deblitating complication such as lymphedema of the arm after radiotherapy or surgery lymphedema.
READ MORE

McMaster Researchers Developing Treatment For Lymphedema in Breast Cancer Patients
Breast cancer patients may develop swelling in the arm, called lymphedema, as a complication of treatment, which can last a long time.
READ MORE 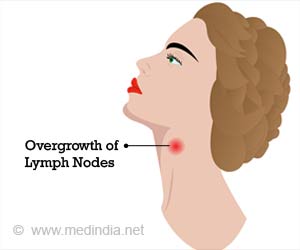 Castleman Disease (CD)
Castleman disease (CD) is a rare but benign condition in which there is lymph node enlargement. It can either be unicentric (single lymph node group involved), which is the more common type or the less common multicentric type
READ MORE
Sign up for Wellness Consult a Doctor Sign up for Selfcare