is a zoonotic disease (source of transmission in an animal) caused by bacteria called spirochete, known as Leptospira, whose natural reservoir is a variety of both wild and domestic animals, including rodents, insectivores, dogs, cattle, pigs and horses. It is also known as Weil's disease, after the one who first recognized the disease. 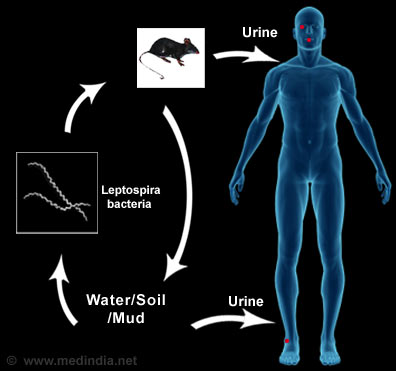 Leptospirosis occurs worldwide, but it is most commonly acquired in the tropics. The Leptospira bacteria can infect both animals and humans. The bacteria are excreted through urine.

Human infection occurs through direct contact with the urine of an infected animal or by contact with a urine-contaminated environment, such as water, soil or plants. Once the bacteria gains access into the body, it spreads rapidly within 24 hours, causing damage to almost every organ.

Leptospirosis typically progresses through two phases of non-specific symptoms. Initial symptoms of the disease include high fever, severe headache, muscle pain, chills, redness of the eyes, abdominal pain, jaundice, hemorrhages in the skin and mucous membranes, vomiting, diarrhea and rash. The disease is usually self-limiting i.e. the patients who do not develop complications in the liver (i.e. they develop jaundice) usually recover. However 5% - 30% of untreated patients die due to involvement of the kidney - acute renal failure.

Leptospirosis is treated with antibiotics like penicillin, ampicillin, or azithromycin. The prognosis of leptospirosis is generally good. It is rarely fatal.

Latest Publications and Research on Leptospirosis

What are the Causes of Leptospirosis? >>

We here in Thailand are being told there is no reason to panice about any water borne deseases in the current floods. We have thousands of tons of uncollected rubbish floating in the water animal and human waste. What can we do to minimise the risk of contacting leptospirosis cholera malaria etc. Is there som medicine we can take to lesson the risks. many thanks Paul

Whenever patients are coming with fever it is better that the doctor ask them to go for three tests namely MALARIA,WIDAL and LEPTOSPIROSIS.By doing this we can prevent the spreding of disease

Cholera Cholera is an infection of the small intestine and is caused by the bacterium Vibrio cholerae.