Refractive surgery for vision correction was revolutionised with the entry of laser. Radial keratotomy used to be the only available option in the past. This procedure had a multitude of disadvantages that paved the way for innovations. Today a large number of options are available that allow patients to enjoy better vision without using contact lenses or glasses. Techniques using laser allow faster recovery rates when compared to the older modalities. The most common options available are: 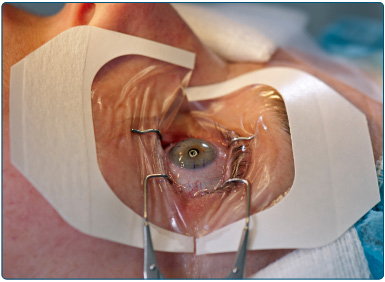 LASIK or Lasik (laser-assisted in situ keratomileusis) is the most popular and widely accepted vision surgery in our country. LASIK is an effective treatment option for myopia (nearsightedness), hyperopia (farsightedness, hypermetropia), and astigmatism (irregular conformation of the cornea).

Cornea is that part of the eyes that aids in focussing light so as to create an image on the retina. Cornea is reshaped by removing a predetermined amount of corneal tissue and this ensures better focusing power, and enhanced visual acuity. The cornea has three layers: epithelium, stroma, and endothelium. The reshaping works are done on the middle layer (the stroma). In LASIK, access to this layer is achieved by creating flaps in the epithelium using an instrument called a microkeratome. Excimer laser is then used to correct the shape of cornea.

Typically LASIK procedure is near-painless. Minimal amount of corneal tissue is affected by the procedure.

LASIK eye surgery is a safe and effective treatment. A good candidate and an experienced LASIK surgeon ensure a success rate of more than 95%. LASIK lets a patient enjoy better vision without using contact lenses or glasses. Surveys reveal a patient satisfaction range of 9298 percent. It is however recommended that you avoid being influenced by friends that have had the procedure or doctors encouraging you to do so. In our country, the expenses in performing a LASIK fall in the range of Rs.20, 000 to 30,000.

Photorefractive keratectomy (PRK) gives results as excellent as what a LASIK deliver. Reshaping the cornea is done using the same excimer lens that LASIK employs. The difference lies in the fact that, in PRK no corneal flap is made at the beginning. As already mentioned, the cornea has three layers: epithelium, stroma, and endothelium. The reshaping works are done on the middle layer (the stroma). In LASIK, access to this layer is achieved by creating flaps. But in PRK, the thin surface layer (the epithelium) is completely removed. Epithelium grows back after the surgery. This takes some time. PRK therefore takes a longer time for patient recovery. Low costs and fewer complications however make PRK an attractive option for patients who do not qualify for LASIK.

Laser Epithelial Keratomileusis, or LASEK works by correcting the corneal shape. Here the edges of the epithelial cells are loosened using alcohol. Thus the top layer can be raised without cutting a flap. After this, laser is applied to the stroma. The cell layer in the epithelium is then repositioned and a soft contact lens is placed over the eye to help keep the cells in place while it heals. LASEK is most commonly employed in:

Visual acuity attained is better than PRK, and comparable to LASIK.

In EpiLASIK a thin flap is made in the corneal epithelium using an epikeratome. It acts as a separator that creates an epithelial sheet. Rest of the procedure is the same as any of the procedures explained before. A Wavefront based excimer laser beam is applied to reshape the cornea. EpiLASIK overcomes most of the limitations of LASIK. They are perceived as the best choice for thin or flat corneas, for eyes requiring high refractive correction. Patients who are unfit for LASIK thus gain benefit from EpiLASIK.

The first portion of the ALK procedure is similar to what is done in LASIK, i.e. creating flaps in the epithelium using an instrument called a microkeratome. The flap is folded back. In the correction of nearsightedness the microkeratome is used again to remove a thin layer of the cornea after which the flap gets replaced. In farsightedness, all that has to be done is replacement of the flap; no tissue is removed. During replacement cornea steepens thereby automatically correcting farsightedness.

ALK procedure is less accurate when compared to the other laser vision correction surgeries.Not just that, there is a risk of irregular astigmatism with this treatment. A quick healing period of 24 hours is however an advantage.

Quiz on Eye
The eyes are the most complex part of the body after the brain. To learn more about the eye, its functions and the diseases that affect the eye participate in this ...

Retinoblastoma - Causes, Symptoms, Diagnosis, Treatment & Prevention
Retinoblastoma is a type of cancer of the eye occurring in children. Early diagnosis and treatment, and genetic counselling can go a long way in saving life and vision in children and siblings at risk for this disease.

Vision Center - Online Vision Guide
A list of eye tests to find out how healthy your eyes are. Contains a brief about visual accuracy test, distance acuity test and macular function test. Check for visual impairment and degeneration in any part of your eyes.

Myopia
Myopia is the inability of a person to see the distant objects clearly. Myopia is also known as near or short sightedness.

Double Vision
Diplopia or double vision is a type of visual impairment in which two images of the same object are formed. Diplopia results in blurry vision and double vision, interfering with daily activities.