Laryngeal cancer is also called cancer of the larynx or throat cancer or laryngeal carcinoma. It usually affects men over the age of 55 years and first presents usually with symptom such as hoarseness of the voice. Early diagnosis has a curative rate, however late diagnosis may mean poor outcome or prognosis to treatment

The inside of the larynx is lined by thin, flat cells called squamous cells. Most of the laryngeal cancers form in these cells. A diagnosis of laryngeal cancer is typically entertained in an individual with a prominent smoking history and the complaint of a prolonged hoarse voice.(1✔ ✔Trusted Source
Head and Neck: Laryngeal Tumors: An Overview

What is Larynx - Be it melody, cacophony or a whisper, all goes to the credit of the larynx; commonly called the voice box. The larynx is lodged just beneath the pharynx (throat) in the neck. It houses the vocal cords, which vibrate and produce sound by manipulating the air that strikes them. This sound echoes through the pharynx, mouth and nose to emerge as our voice.

The functions served by larynx are: 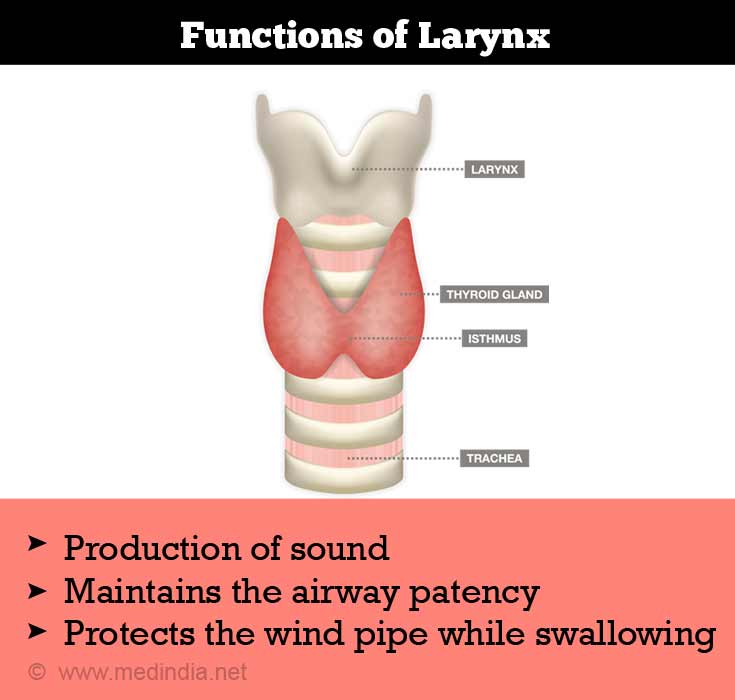 The larynx has three parts:

Chemotherapy
'Chemo' means medicine or 'drug'; 'therapy' means 'treatment'. Chemotherapy refers to the use of cytotoxic drugs in cancer treatment.

Computed Tomography
Computed Tomography (CT) scan is a type of medical examination that uses X-rays and computer processing to create sectional images of the body to provide more efficient results than X-rays.

How to Quit Smoking
Tired of people asking you to stop smoking around them? Don't want to be ordered around by public smoking bans? Simple steps that help you to quit smoking.

Why smoking can kill you
Every cigarette you smoke is causing irreversible damage to your body; slowly killing you from the inside. It also endangers those around you, your family and children.

Vocal Cord Dysfunction
Vocal cord malfunction, commonly known as vocal cord dysfunction is a condition where the vocal cords open and close inappropriately resulting in partial obstruction to the airways.

Voice Disorders
Voice is an effective way of communication in human beings, ranging from getting across one's point of view to powerfully commanding an army.

Pharyngeal Cancer / Throat Cancer
Pharyngeal cancer, commonly referred to as throat cancer, is a form of malignant tumor that can affect the pharynx, the part that connects the nose to the food pipe.

Ear, Nose, Throat Surgery and Procedures - Surgical Procedure
ENT surgery procedures are among the most commonly performed of all surgical treatments. Find out when ENT surgery and how ENT specialists treat the numerous conditions in their specialty.

Difficulty in Swallowing or Lump in the Throat (Dysphagia) Symptom
What are types of lumps in throat and what causes them? Can they be a sign or symptom of something more sinister? Understand these lumps better.

Laryngectomy - Surgical Procedure
Find out how smoking increases risk for throat cancer and the use of laryngectomy, which is a surgical procedure to remove the larynx and ways to restore voice.

Laryngitis
Laryngitis is due to inflammation of the larynx caused by infections, overuse, or the environment. Hoarseness of the voice is the main symptom.

Throat Disorders - Symptom Evaluation
Throat problems are common, several throat problems go away on their own but some may be much more grave. Treatment for throat disorders depends on the condition.
Sign up for Wellness Consult a Doctor Sign up for Selfcare
Advertisement
Health Topics A - Z
A B C D E F G H I J K L M N O P Q R S T U V W X Y Z