Labyrinthitis is a problem of a part of inner ear (labyrinth), which is characterised by swelling and pain inside the ear. The condition also causes dizziness and vertigo and in some cases may hamper hearing capability to varying degree. A patient can have labyrinthitis in either one or both the ears.

The human ear is not only an organ of hearing but also provides the sense of balance or equilibrium to the body. Labyrinth is a fluid-filled structure inside the ear and appears like a maze of channels and canals. Half of this structure is called cochlea and it appears like snails shell. The sound that we hear is transmitted by ears to the brain by the cochlea. The cochlea converts the sound waves into electrochemical impulses. The remaining half of the labyrinth is called vestibule and it appears like a gyroscope with three semi-circular canals. Vestibules send the information about position and movement of the head to brain and provide the balancing to the body.

In case of labyrinthitis, cochlea and vestibule become inflamed and therefore patient experiences hearing problems, tinnitus (constant high or low pitched ringing sound in ear) and dizziness. Since the eye also sends information about position to the brain simultaneously to vestibules, non-matching information from both the eye and vestibules, in condition of labyrinthitis, confuses the brain and patient feels the sensation of spinning or moving even in still position (vertigo) along with motion sickness (nausea and vomiting).

What are the Symptoms and Signs of Labyrinthitis?

Most common signs are:

Some patients also get mild headache, tinnitus, and loss of hearing. Permanent hearing loss is very rare with labyrinthitis. The symptoms worsen with change in position or tilting of head.

Labyrinthitis is the inflammation of labyrinth, which is usually caused after a viral infection like cold or flu. The condition rarely occurs due to bacterial infection. Labyrinthitis of viral origin, which is more common than other causes, subsides on its own within 3-8 weeks. However, in case of more severe and debilitating symptoms, medications are required.

Upper respiratory tract infection of virus or epidemic outbreak of viral disease acts as precursor to labyrinthitis. Viruses which are known to cause inflammation of labyrinth are:

Direct bacterial infection of the labyrinth (suppurative labyrinthitis) or inflammation caused due to bacterial toxins (serous labyrinthitis), which travelled to labyrinth from any other site of infection in the body, are main reason for bacterial labyrinthitis. However, bacterial form of the condition is not very common and usually occurs in the patients with the recent history of meningitis or otitis media.

Bacteria which cause labyrinthitis are:

In very rare conditions, autoimmune diseases like Wegener granulomatosis or polyarteritis nodosa causes labyrinthitis, which can even lead to permanent hearing loss. 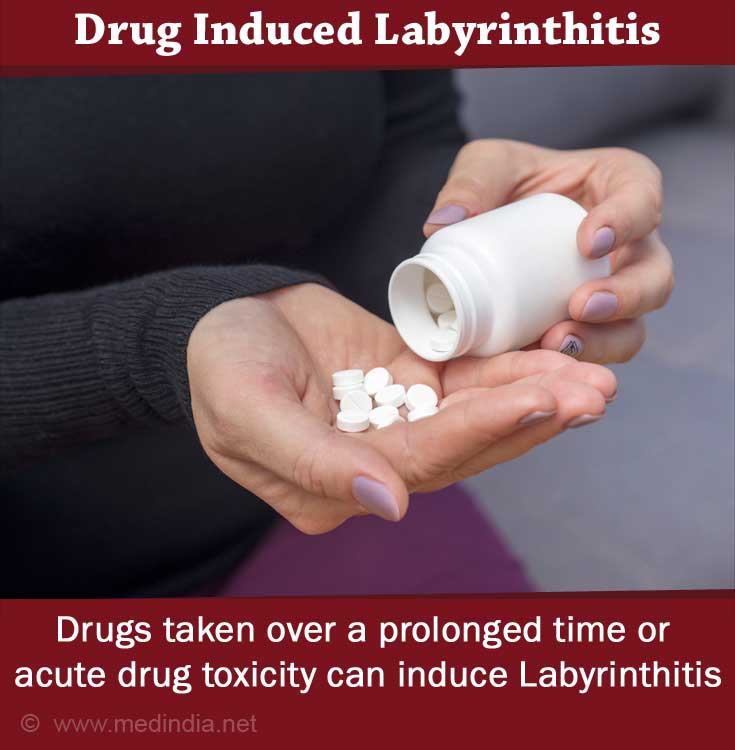 Labyrinthitis can also result from trauma or injury to ear, allergies, non-cancerous tumor in ear, or alcohol abuse.

How Labyrinthitis is Diagnosed?

Post complaints of conditions like vertigo, dizziness, nausea and vomiting, the physician may attempt to reproduce the symptom by quickly tilting the patients head and changing the position.

The physician might then prescribe medication for labyrinthitis. If the symptoms do not subside with the drugs, the physician may ask for laboratory testing as below: 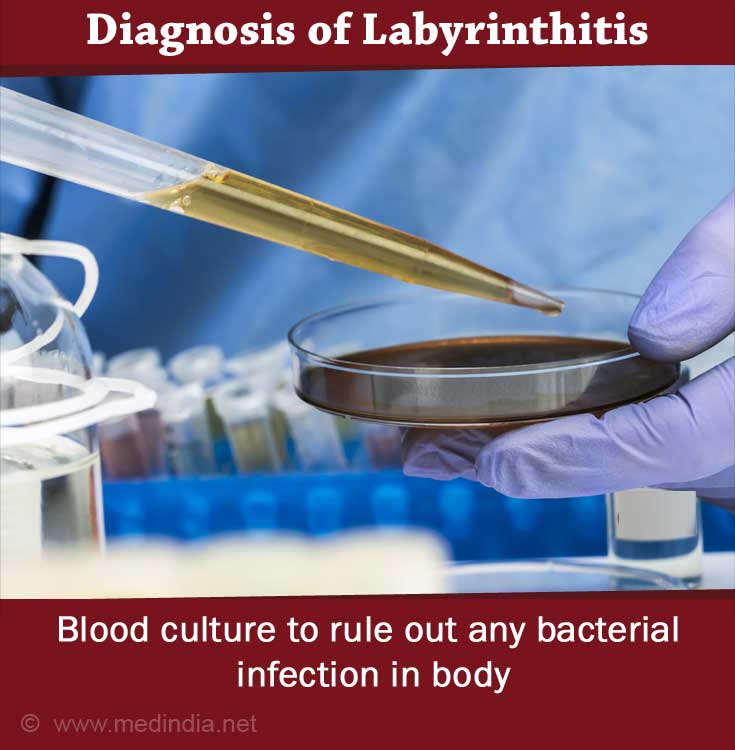 What is the Treatment Approach for Labyrinthitis?

Patients with viral labyrinthitis are advised to take bed rest and keep themselves well hydrated. Usually the patients are treated in the outpatient department and then discharged. Intravenous fluid replacement therapy may be given to the patient with severe nausea and vomiting.

Antibiotic treatment is selected on the basis of blood culture and sensitivity results. Treatment approach for labyrinthitis due to infection to the membrane (suppurative labyrinthitis) is always aimed to eradicate the causative infection. The physician may also drain the middle ear effusion or the infection in mastoid bone to prevent the spread of infection.

If the labyrinthitis is not responding to antibiotics and is due to otitis media pressure is built up inside the ear due to fluid or pus accumulation. In such cases, a surgical procedure called Myringotomy is performed by ENT surgeon. A small incision is made in the eardrum and the pressure is relieved by draining out the fluid and pus. A ventilation tube called tympanostomy tube is inserted in the eardrum via the incision to keep the inner ear aerated and prevent further fluid accumulation. The tube is removed after healing and eradication of the infection, which may in some cases, may take 6-12 months. 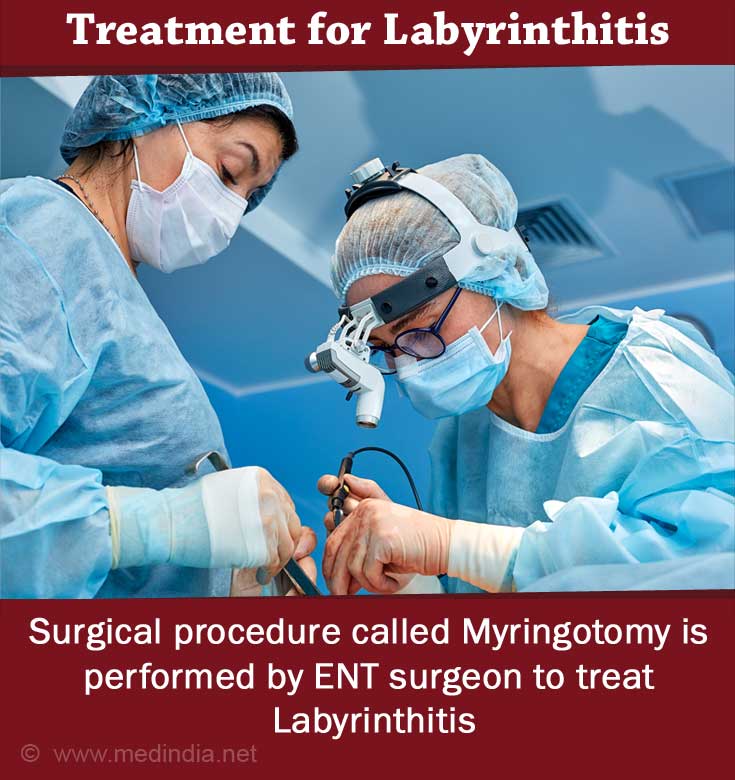 In patient treatment In case of worsening symptoms like extreme weakness, numbness, disturbances in gait, disturbances in speech and double vision, underlying neurological defects admission to hospital is advised and besides ENT (ear, nose, throat) specialist, a neurosurgeon and infectious disease specialist may need to be consulted.

What medications are given to treat labyrinthitis?

Depending on the symptoms as well as the causes, the physician may prescribe any of the enlisted medication either on its own or in combination.

The drugs reduce the activity in side central nervous system and therefore the brain gets less affected by the abnormal nerve signals coming from ear due to labyrinthitis.

Prochloperazine is the choice of drug for controlling vomiting and vertigo. The drug can be used as an alternative to benzodiazepines as they are habit forming. Prochloperazine tablet (3 mg) is given to the patient, which readily dissolves when placed between gums and cheeks. The drug can be taken immediately if vomiting starts or is uncontrollable. Possible adverse effects, although rare, are tremors, involuntary facial and body movements, and mild sedation.

Corticosteroid like prednisolone is prescribed if the inflammation is very severe. Short course of the drug is helpful especially in case of viral labyrinthitis. The dosage is always calculated by the physician as per the severity of condition. The drug is never discontinued abruptly and gradual dose tapering is required.

Broad spectrum antibiotics are selected as per the results of blood culture.

What is Vestibular Rehabilitation Therapy?

Many patients develop chronic form of the disease, which may lead to continued dizziness and vertigo for months or years. This can significantly affect their quality of life and performance at work.

Vestibular rehabilitation therapy is a physiotherapy to retrain patients brain and nervous system in order to reduce confusion due to abnormal nerve signal coming from inner ear (vestibular system). The specially designed physiotherapy exercise is aimed to: 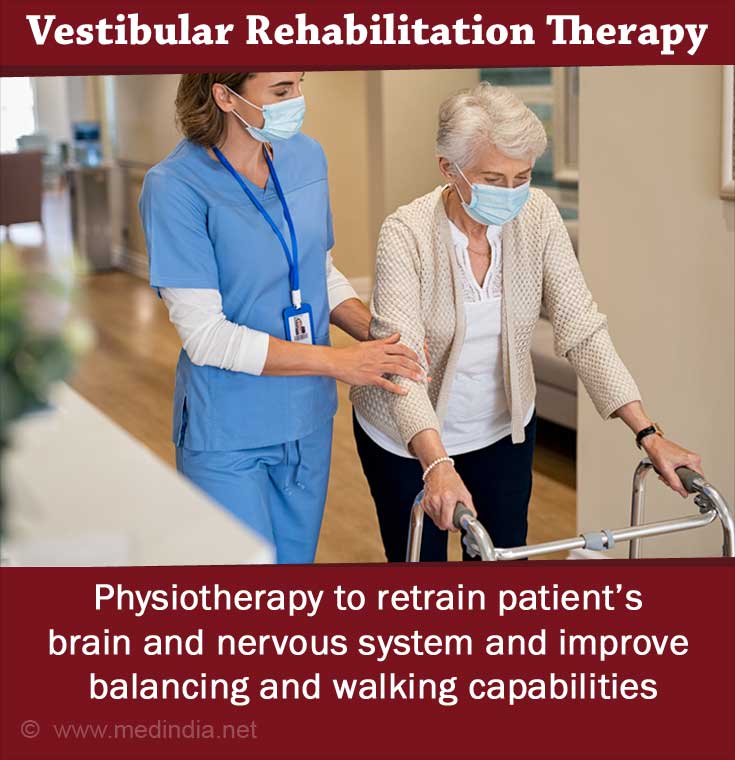 How the patient can take self-care at home?

Latest Publications and Research on Labyrinthitis

Hearing Loss Symptom Evaluation Hearing loss is a common problem that could occur in childhood or often develops with age or is caused by repeated exposure to loud noises. Keep abreast on its causes and symptoms.

Dizziness Symptom Evaluation The different types of dizziness can be differentiated based on clinical symptoms and tests conducted on the patients.

Labyrinthectomy - Surgical Procedure Labyrinthectomy is the surgical removal of the labyrinth of the inner ear, consisting of the cochlea, semi-circular canals and vestibule, for controlling vertigo caused due to Meniere's disease and other conditions.
Sign up for Wellness Consult a Doctor Sign up for Selfcare
Advertisement
Health Topics A - Z
A B C D E F G H I J K L M N O P Q R S T U V W X Y Z