What happens in the second stage of labor?
Cervix becomes fully dilated. The membranes if present usually rupture during this stage or they are manually ruptured. The color of the amniotic fluid is a pointer towards the well being of the baby. If the fluid is meconium stained, then it indicates that the fetus is in respiratory distress and the fetus has to be delivered immediately. Pain becomes more frequent and is typically described as bearing down pains. As the pain increases the intensity of uterine contractions increases. Vaginal examination is done to review the progress of the fetus descending down the pelvis.

How is the second stage of labor conducted?
The mother is advised to pass urine at the beginning of this stage. If is unable to pass urine due to pressure on the bladder, catheterization is done. She is asked to lie down with her back to the labor table. She is encouraged to bear down when the contractions reaches its peak and to take deep breaths in between. Generally the head is delivered between the contractions. Once the head is delivered, the shoulders are expelled during the next contraction.

After the delivery of the shoulders the body is generally expelled quickly without much effort. The umbilical cord is then tied at the two ends once the pulsations stops. One end is tied leaving about four centimeters from the umbilicus of the baby and the other ligature near the vulval outlet and the cord is cut between the two ligatures.

Having undergone the process of labor and delivery myself, all I can say is: each labor and delivery experience is different. It is the most painful thing I have ever experienced in my whole life but also the most rewarding. All the pain will vanished once you see your little bundle of joy.

what is the mechanism of labor ?

The mechanism of labor is in several stages. In pre-labor, the uterus begins to contract, but the contractions are more gentle. The pregnant woman can usually go about her day. In the first active phase of labor, the uterus contracts more rhythmically and frequently, usually requiring undivided attention. These contractions coincide with the cervix dilating to about 10 cm to allow for the baby to pass through. In the second active phase of labor, the doctor or midwife will ask that the woman push each time a contraction occurs. This assists the uterus contractions in pushing the baby out. Finally, in the third phase, the placenta is expelled. 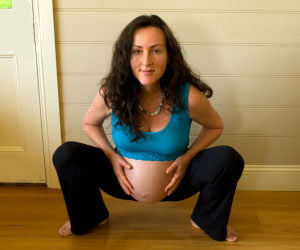 Tell-tale signs / Yoga and Pregnancy
Through yogic practice, the phase of pregnancy can be transformed into a joyous, natural experience bringing about health and wellness to the mother and the baby
READ MORE

Cesarean Section - Surgical Procedure
Cesarean section is a method of delivering the baby from the mother by means of an operation. The mother's abdomen and the womb are cut open and the baby is extracted from within.
READ MORE