What is Kidney Failure due to Melamine Toxicity?

Consuming food that is adulterated with melamine causes formation of kidney stones and kidney failure, which may even lead to death.

Melamine is an industrial chemical commonly used in the manufacture of a number of products like melamine crockery, plastic materials, gum, tiles, filters, dyes, fertilizers, fabrics and fire retardants. 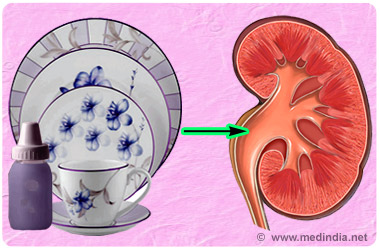 In 2008, an outbreak of melamine toxicity occurred in China where it was found that infant formula and certain foods containing milk - biscuits, ice-cream and candy - were contaminated with melamine. Up to September 22, 2008, 52,857 cases of kidney stones with kidney failure, 12,900 hospitalizations and 4 deaths were reported in China, which were related to the consumption of products contaminated with melamine. Unfortunately, children under the age of 3 years were most affected. The number increased to 2,94,000 cases and 6 deaths by 1 December 2008.

Melamine is high in nitrogen content, giving a false impression that the food product is rich in protein. The addition of 1g of melamine to 1L of milk increases the apparent protein content by 0.4 percent. In China, milk was diluted with water to increase the volume but then it tested low for protein concentration when sold to infant feeds manufacturers. In order to avoid this, melamine was added to the diluted milk to mask the reduced protein content of the milk. The results of the adulteration were disastrous. Children younger than 3 years of age suffered from kidney stones, kidney failure and death.

Symptoms included pain and difficulty in urination, passage of stones in the urine, colic, and ultimately leading to decreased urination, accumulation of fluid, high blood pressure and death in some cases.

Melamine had been earlier used in adulteration of pet food, leading to a number of deaths in cats and dogs due to acute kidney failure in the United States in 2007. In these cases, cyanuric acid was found to be present along with melamine. Cyanuric acid is normally used as a stabilizer in outdoor swimming pools and hot tubs. According to a study published in the journal Toxicological Sciences, a reaction between melamine and cyanuric acid results in the formation of a crystalline melamine-cyanuric acid complex which then forms an insoluble precipitate in kidney tubules that is of sufficient severity to cause renal failure via physical blockage. In other words, when this pair is ingested, it can form kidney stones and result in kidney failure.

Individuals prone to kidney stone formation with melamine appear to be those with smaller body size, those consuming higher dosage of melamine, and with low fluid intake.

Treatment: is managed by treating the kidney damage. Fluids and electrolyte intake may have to be monitored. Kidney stones may have to be removed surgically. Dialysis may be required in some cases.

Packaged Salads, Melamine in Food - Under New Regulation by UN
The issue of food poisoning has been addressed by UN agencies who have imposed restrictions on melamine content in food and stricter guidelines for packaged salads.

Dialysis
Dialysis is an artificial process for removing excess water and waste from the blood. Hemodialysis and peritoneal dialysis are the types of dialysis.

Kidney Stones
A kidney stone is a solid mass made up of tiny crystals and may appear in any area of the urinary system.

Acute Renal Failure
Acute renal failure is the sudden cessation of the functioning of kidneys, that can be due to reduced renal blood flow, damage to renal tissues.

Quiz on Kidney
How healthy are your kidneys? Is it possible to lead healthy lives with just a single kidney? Learn more by taking part in this ...
Sign up for Wellness Consult a Doctor Sign up for Selfcare
Advertisement
Health Topics A - Z
A B C D E F G H I J K L M N O P Q R S T U V W X Y Z