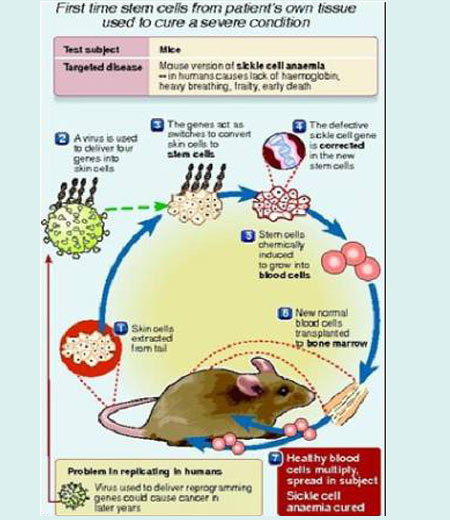 It was the kind of breakthrough scientists had dreamed of for decades and its promise to help cure disease appears to be fast on the way to being realized. Researchers in November announced they were able to turn the clock back on skin cells and transform them into stem cells, the mutable building blocks of organs and tissues.

"This is truly the Holy Grail: To be able to take a few cells from a patient -- say a cheek swab or few skin cells -- and turn them into stem cells in the laboratory," said Robert Lanza, a stem cell pioneer at Advanced Cell Technology.

"This work represents a tremendous scientific milestone - the biological equivalent of the Wright Brothers' first airplane," he told AFP.

"It's bit like learning how to turn lead into gold."

Stem cells offer enormous potential for curing and treating disease because they can be transformed into any cell in the body and then hopefully used to replace damaged or diseased cells, tissues and organs.

But stem cell research has been highly controversial because -- until now -- viable embryos had to be destroyed to extract the stem cells.

US President George W. Bush has banned all federal funding for research on human embryonic stem cells and access to stem cells in other countries has also been restricted because of the difficulty in finding women willing to donate their eggs.

The new technique, while far from perfected, is so promising that the man who managed to clone the world's first sheep, Dolly, is giving up his work cloning embryos to focus on studying stem cells derived from skin cells.

"The fact that (the) introduction of a small number of proteins into adult human cells could produce cells that are equivalent to embryo stem cells takes us into an entirely new era of stem cell biology," said Ian Wilmut, the Scottish researcher who first created a viable clone by transferring a cell nucleus into a new embryo.

One of the greatest advantages of the new technique is its simplicity: it takes just four genes to turn the skin cell back into a stem cell.

This, unlike the complex and expensive process developed by Wilmut, can be done in a standard biological lab. And skin cells are much easier to harvest than embryos.

"It's an explosion of resources," said Konrad Hochedlinger, of the Harvard Stem Cell Institute.

Prior to this discovery, researchers who wanted to look at how diseases developed would usually have to study animals or organs harvested from cadavers because embryonic stem cells were so hard to use and access.

But with stem cells derived from skin, tissues and organs can be grown in a petri dish, making it easier for researchers to map the genetic structure of diseased cells, a process which could unlock a cure.

They could also allow researchers to do chemical screens to identify drugs which may cure or treat a disease, a process which could significantly speed up the process of bringing life-saving drugs to the market.

The use of skin cells will eventually allow doctors to create stem cells with a specific patient's genetic code, eliminating the risk that the body would reject transplanted tissues or organs.

Researchers have already shown this is possible when they cured sickle cell anemia in mice.

They used skin cells taken from the tails of sick mice, transformed them into stem cells, manipulated those stem cells into healthy bone marrow cells and then transplanted them into the sick mice.

And since the new cells came from the sick mice, there was also no need for dangerous immunosuppressant drugs to prevent rejection.

But leading stem cell researchers warned that the skin cells are not yet -- and might never be -- a substitute for embryonic stem cells.

"This new research is just the beginning -- we hardly understand how these cells work," said James Thomson of the University of Wisconsin at Madison, who led one of the two teams which made the simultaneous discoveries.

"It is not the time to abandon stem cell research," Thomson said, adding that embryonic stem cells will remain the "gold standard" by which other research is measured.

Further research is also needed to find a safer way to transform the skin cells and to make sure that the cells do not deteriorate over time.

i need a stem cell transplant for c.i.d.p. i have been on iv Gamma Glub for 10 years

I am based in Delhi. How can I avail of your services? how about the costs etc? A.K. Srivastava

we can get totipotent stem cells from human embryos that are created invitro in ART labs.

Hello,
I am a c2/c3 quad on a ventilator. I have been paralyzed for 15 years as a result from fooling with a friend. I writing to find about any type of human spinal cord rejuvenation trials. If so or any type along that line, then please let me know.
Thanks

I know that Miami college in Florida has been working on this in animals, so they can do this in humans. They have been doing wonders. Give them a call. It might just change your life. Be persistent about it with them. You could also call up Pen State. Their are some wonderful BME people there. M for Medical that is. They might be able to help. Call Florida first for sure. God bless your journey.


so, how can we take totipotent cells frm a human? is tht practically possible? if we could, it wud be great, isn't it?