(HMS) is a condition in which the joints of an individual have the ability to move about far more beyond the normal range.

In those with this condition, the ability to perform contortionist activities such as bending thumb backward to touch the wrist or stretching the leg behind the head is commonly observed.

In a lay context, people with joint hypermobility are called double jointed due to the extreme laxity of their joints. As a result many of them can excel as good gymnasts. 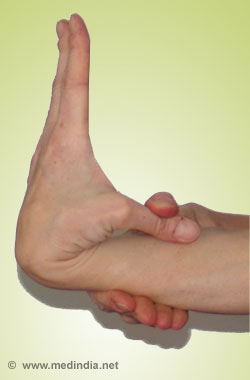 Hypermobility may be present alone without any other symptoms. However many limitations are observed such as muscle fatigue and a general predisposition to joint dislocation.

In those with HMS, hypermobility of the joints may occur alongside other symptoms, such as and arthralgia and together they constitute the hypermobility syndrome.

On an average, this condition is estimated to occur in 10%-15% of all otherwise -healthy children. HMS is seen to occur more in women than in men.

Hypermobility syndrome runs in families; the presence of certain genes in predisposing an individual to develop hypermobile joints has been suggested. It may be interesting to note that the genes responsible for synthesizing connective tissues, such as collagen, are implicated in the rendering joints hypermobile.

It comes as no surprise therefore that hypermobility is very commonly featured in patients with Ehlers Danlos syndrome, a condition characterized by weak connective tissues.

Individuals with HMS have tall parents.

Hypermobility syndrome is a benign condition and not lifethreatening. However, it could cause complications like and joint dislocations.

I have nine month old boy who w sits occasionally but major thing is he pulls himself to a stand position by standing on the outsides of his feet. Is this going to hurt him? Is he going to ever be able to walk? Is this a sign of hypermobility

Colle's Fracture
Colles fracture or broken wrist is a wrist fracture, which occurs within an inch of the wrist joint. Colles fracture involves the forearm bone's distal end of the radius.

Fracture of Knee Cap
Patella fracture is a kneecap injury that needs surgical correction. Undisplaced fracture can be healed by using a brace to keep the knee immobile.

What is arthritis?
The pain in the joints can be effectively eased through the practice of yoga, which gives flexibility to the joints and strength to the muscles of the body parts

Fibromyalgia
Fibromyalgia (FM) is a chronic health condition charecterized by widespread pain and stiffness in the muscles, joints and tendons. It is considered to be a co-morbid disorder.