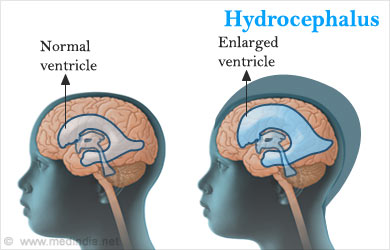 There are 3 possibilities for the development of hydrocephalus. They are as follows:

Hydrocephalus is observed in children, adults, and in senior citizens.

Acquired Hydrocephalus  This condition may be caused by disease or an injury. It presents either at birth or at a later time. Acquired hydrocephalus is observed in individuals of different age groups.

Congenital Hydrocephalus  This condition is observed at birth and is a result of either genetic aberrations or complications during fetal development.

Non-communicating  This condition is also known as obstructive hydrocephalus because the CSF is blocked in the narrow passage that connects the ventricles in the brain.

Normal Pressure Hydrocephalus (NPH)  This is a condition that affects adults. The amount of CSF increases abnormally due to various reasons, such as head injury, tumors, surgery complications, or haemorrhage. In some cases, there is no underlying cause for the abnormal increase in CSF.

Hydrocephalus Ex-vacuo  This condition occurs due to a serious injury or a stroke. The brain tissue shrinks after injury and the CSF fills in the space ex-vacuo.

Hydrocephalus is known to be caused by the following factors: 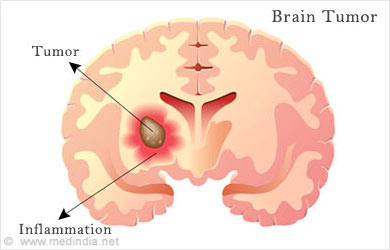 Lysophosphatidic acid (LPA): Abnormal levels of this brain lipid may cause congenital hydrocephalus.

A rapid increase in the size of the head results in an unusually large head. Vomiting, seizures, sleepiness, and downward movement of the eyes are some of the other symptoms.

In older children, the symptoms, include the following:

Symptoms for NPH (normal pressure hydrocephalus) include the following:

Symptoms of individuals with hydrocephalus vary with age and from one individual to the other. 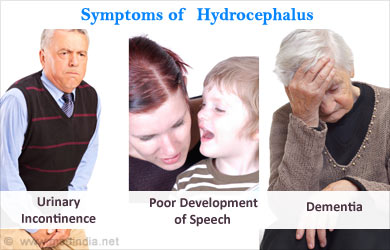 Hydrocephalus can be diagnosed with brain imaging techniques, such as MRI, computed tomography, measurement of intracranial volume, and an ultrasound.

The choice of diagnostic tools depends on the age of the individual, the cause of the condition (known defects in the spinal cord or the brain), and the clinical manifestation of the condition.

There are 2 treatment methods for hydrocephalus. They are either surgical or non-surgical.

Surgical treatment  There are 3 ways to surgically treat hydrocephalus.

Shunt System  This is the most common form of treatment, where a flexible, sturdy plastic tube is inserted into the brain to drain out the excess CSF and drain it into another part of the body, where the fluid may be absorbed. A catheter is placed in the ventricle of the brain, while the other end of the catheter is placed in an alternate location of the body (eg, the heart or the abdominal cavity) for the CSF to be absorbed into the system. A valve is placed to maintain a unidirectional flow of the CSF. Currently, an external magnetic device may be used in place of a valve to regulate the flow of the CSF. This device prevents the need for another surgical procedure to regulate the flow. Patients need to be monitored regularly to confirm the effective working of the shunt. The device may need replacement or adjustment over time.

There are certain complications involved with the use of the shunt system. Some of them, include overdrainage of the CSF, tube fracture, partial or total movement of the shunt, infection of the shunt (staphylococci, enterococci, streptococci), and mechanical problems with the shunt (when the catheter is blocked by the choroid plexus or when there is a magnetic interference with the magnetic device).

Endoscopic Third Ventriculostomy  This procedure involves the use of an endoscope that consists of a small camera that can be used to pass into the third ventricle of the brain. The endoscope can be used to visualize any blocks in the ventricle, and a tool is used to make a small hole in the floor of the ventricle. This hole then allows the CSF to be drained out to an alternate site for it to be reabsorbed. There are no added benefits of this procedure over the use of shunts to treat hydrocephalus. Infections and bleeding are some of the complications of this procedure. However, third ventriculostomy has been shown by some research studies to improve the survival of patients with non-communicating hydrocephalus.

Combined Endoscopic Third Ventriculostomy/Choroid Plexus Cauterization (ETV/CPC)  This is a new method that was first developed at the Boston Childrens Hospital. In this method, the increase in CSF production in the first and second ventricles is reduced, while the block in the third and fourth ventricles is eliminated. The procedure involves the use af a mini-tube endoscope fitted with a camera and a wire by passing it through the brain ventricles. The endoscope identifies the choroid plexus (capillary bed supplying the CSF) within the first and second ventricles and burns the capillary bed with an electrical charge. In addition, third ventriculostomy is also performed. Through this method, the excess production of CSF is reduced from the first and second ventricles, while the block is also removed from the third and fourth ventricles.

Non-surgical Treatment  This involves the use of medications to treat hydrocephalus. 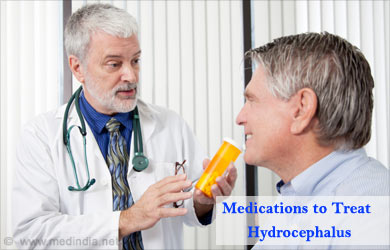 Patients must inform the doctor of any complications that occur following surgery. Some of the complications, include pain, blurred vision, fever, renewed symptoms of hydrocephalus, increased drowsiness, nausea, and headache.

Children, who have been treated for hydrocephalus may require a team of doctors to assist in the recovery and rehabilitation. The team may include a paediatrician, a paediatric neurologist, a social worker, a developmental therapist, a mental health worker, an occupational therapist, and a special needs teacher. Adults also may require some of the above services for their recovery.

It has been observed that post-hemorrhagic hydrocephalus may be reduced with appropriate ventilation, a good control of temperature, blood pressure, and gases, better care, and the use of steroids and surfactants.

Latest Publications and Research on Hydrocephalus

Settings on Brain Shunt Devices may Get Altered by Magnets in IPad2 A 4-month-old baby with hydrocephalus intrigued scientists after the child began to experience a shunt malfunction, even though it was just three weeks after the implant.

Scientists Discover Clue to Cause of Childhood Hydrocephalus Scientists have found what may be a major cause of congenital hydrocephalus, one of the most common neurological disorders of childhood.

New Guidelines for the Treatment of Pediatric Hydrocephalus New guidelines of the current treatments for pediatric hydrocephalus as well as up-to-date evidence-based recommendations have been published in the Journal of Neurosurgery Publishing Group.

Encephalocele - Congenital Neural Tube Defect Encephalocele is a birth defect where a sac like protrusion of brain and covering membranes occurs through the abnormal gap in between the skull bones due to failed neural tube closure during fetal development.
Sign up for Wellness Consult a Doctor Sign up for Selfcare
Advertisement
Health Topics A - Z
A B C D E F G H I J K L M N O P Q R S T U V W X Y Z