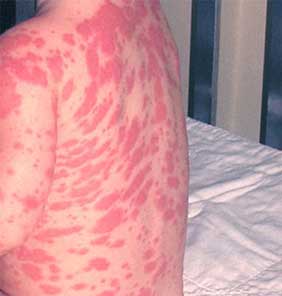 Hives are allergic skin reactions that appear suddenly in clusters or single bumps or blotches (swelling) on the skin surface and can be itchy. Hives is medically known as Urticaria (pronounces as ur-tuh-kar-ee-uh). These occur due to allergy to food substances (e.g strawberry, shellfish, prawn, milk, nuts and choclates) or drugs (e.g sulpha or penicillin) or sometimes due to no known cause.

Hives may be small in size like a button and may at first look like mosquito bites. Alternatively, the large blotches maybe several centimeters in diameter. Very often the smaller ones join together and form a large raised red patch and this is then called a plaque. The rash can be itchy or the involved area can cause a constant burning or stinging sensation.

These rashes are mostly red or pink in color with a pale center and circular in shape and usually are commonly seen to occur on the arms, trunk and legs. If the welts or the swelling occurs around the face particularly in the eyes, lips and (sometimes) throat, it is called angioedema.

Most people will get anxious and visit a doctor immediately as it appears in such a dramatic fashion.

Hives can last for a few hours or take several days to fade away and disappear spontaneously. Usually these are benign lesion but can be life threatening angioedema if it involves the inside of the throat, tongue and windpipe. Ten to 25% of the general population will experience Hives at least once during their lifetime.

Our immune system is designed to fight - fight foreign substances particularly disease- causing bacteria and viruses that the surveillance system considers as threatening. When the immune system over-responds, allergy results. The antibody- IgE- that plays a key role in allergic response in produced in excess in some people particularly in those who are familiarly predisposed.

Sometimes allergy occurs when the body is hypersensitive to some particles known as allergens. During an allergic reaction, chemicals (Histamine) are released that cause the swelling on the skin that is characteristic of hives. Common allergens include animal dander, dust mites, food substances, pollens, molds, medicines, industrial chemicals, and insect venom.

Hives are a common in occurrence especially in individuals who already suffer from other allergies, such as hay fever. It is not contagious.

Latest Publications and Research on Hives

I suffer from pimpls too,my parents went to doctors in many places with the hope of curing me of the disease. However, my conditions did not get any better despite the expense of a lot of money. They decided to have a try and took me to a Chinese hospital. The pimples on my face had improved significantly in less than a month. After reinforcement treatment of experts, I have completely recuperated my health and I have become cheerful. I would like to share this with whoever has the same problems,you can talk to their doctors on the website of vitiligotcm.

Reading the food labels is a good suggestions. Food bought from food stores and super-markets is the now very common. Most of these food items have preservatives. Besides this flavorings,
colorings and antioxidants can cause allergies.

Pemphigus
Pemphigus is a rare group of autoimmune diseases that affect the skin and mucous membranes causing blisters and sores that fail to heal.

Acne
Acne vulgaris, popularly known as 'pimples' or 'zits' is a skin condition affecting most teenagers.

Pityriasis Rosea
Pityriasis rosea is a common skin disease that is not contagious. It manifests as oval-shaped, pink or red rash

Allergic Rhinitis
Allergic rhinitis (AR) causes a collection of symptoms, mostly in the nose and eyes and occurs when one breathes in allergens that leads to its inflammation.

Test Your Knowledge on Itching / Pruritus
Itching, also called pruritus, is a sensory experience that causes an impulse or reflex to scratch at the point of itch. While the mechanism of how to stop itching is unknown, it is believed that pain inhibits itch. Causes of itching include ...

Itchy Skin
Itchy skin is an unpleasant skin sensation that urges the person to scratch. The main causes of itchy skin include dandruff, allergic reactions.