Hiccups is an annoying symptom but it usually lasts only for a few seconds or minutes. They usually can occur spontaneoulsy but more often are precipitated by some combination of eating, drinking or laughing. Most cases also resolve spontaneously, and do not require any treatment department unless prolonged or severe.

Hiccup is caused by a paroxysmal, involuntary action due to the spasmodic contraction of the diaphragm - a muscle that seperates the chest from the abdominal section of the body.

Hiccups are observed in a wide variety of animals and are very common in the fetus. A woman may experience increased hiccupping during pregnancy due to increased inhaling and exhaling of air and the physiological changes of compression of the abdominal contents that are associated with pregnancy.

Hiccups when persistent can interfere with daily routine of a person including eating and sleeping.

Why do we Hic and its origin - This action occurs along with contraction of the vocal cords and the closure of a plate called - the epiglottis above the windpipe. When the diaphragm contracts there is a rush of air into the lungs that cannot escape due to the closed epiglottis, and this generates the classical hic sound.

According to some established hypothesis hiccups reveal some of our evolutionary history of origin from the fish and the amphibians. The major nerve of breathing called the Phrenic nerve was inherited from fish. The nerve takes a tortuous course from the base of the skull to reach the strong diaphragmatic muscles in the lower section of the chest. Anything that irritates this nerve in its course causes hiccups. For the fish the nerve stops at the neck where there are gills for breathing, whereas in mammals -like us, the gills were replaced by the much lower diaphragm.

Hiccup serves no actual purpose in man, so is there an evolutionary connection to any other reflex. Apparently it is the amphibians where an answer to this perplexing question is available. Apparently the hiccup action is normal breathing activity in amphibians that tend to breathe with both gills and lungs. The tadpoles use hiccup action to breathe normally. To inspire they pump water into the mouth and across their gills but to prevent it from entering the lungs they close their glottis and produce the hic sound and continue to breathe comfortably.

Latest Publications and Research on Hiccups 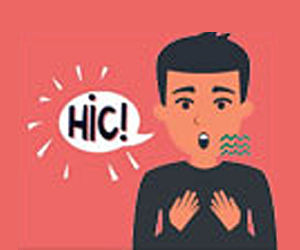 Home Remedies for Hiccups
Home remedies offer you an herbal and natural method to treat hiccups effectively. Try these easy remedies to get rid of hiccups.
READ MORE