What is Hepatitis C?

Hepatitis C is a chronic contagious viral disease that affects the liver. It is caused by the hepatitis C virus (HCV), that is transmitted through contact with the blood of an affected individual. 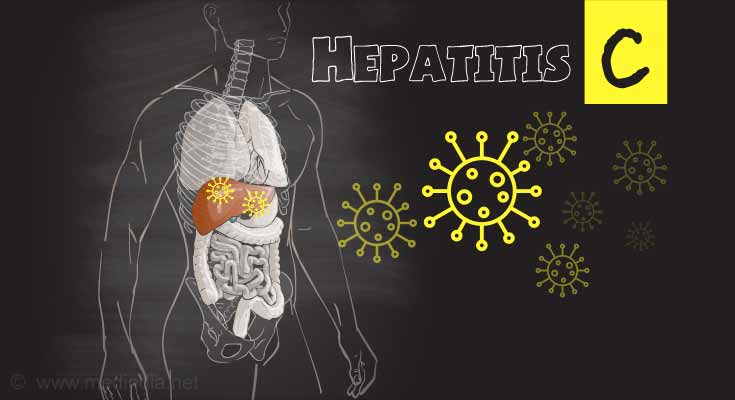 In the case of hepatitis C, no vaccine is available against infection. The infection may take years to produce symptoms; most people thus remain unaware of being infected. By the time they become ill and seek help, considerable damage has been done. Early diagnosis is hence vital.

The rule of twenties often describes the fate of patients with hepatitis C:

There are six genotypes (different types) of Hepatitis C virus. Infections due to genotype 1 are common in the United States, South America and Europe, genotype 2 in west Africa, genotype 3 in south Asia including India, genotype 4 in central and north Africa, genotype 5 in South Africa and genotype 6 in SE Asia.

After a person gets infected, around 1012 virus particles get produced each day in the body. The virus can multiply both in the liver as well as the lymphocytes.

Treatment options include anti-viral medications that cause a lot of side effects.

Patients who develop liver cancer or permanent scarring (cirrhosis) of the liver may require a liver transplant.

There is no vaccine at present. Hepatitis C can be avoided with adequate precautions.

The World Health Assembly adopted the first Global Health Sector Strategy on Viral Hepatitis, 2016-2021 in the month of May 2016. The goal is to eliminate viral hepatitis as a public health problem by the year 2030. The aim is to reduce new infections by 90% and deaths due to the disease by 65%. 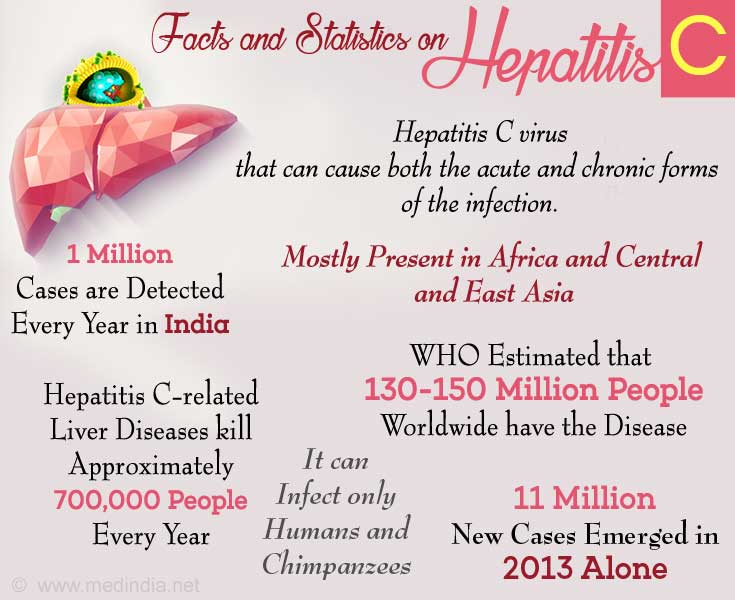 1. Hepatitis C-positive Kidneys can be Transplanted Without Infection

Hepatitis C positive patients may now be able to donate kidneys to recipients without infection risk. Surgeons at Johns Hopkins have successfully transplanted ten hepatitis C-infected kidneys into patients without hepatitis C and prevented the patients from becoming infected by hepatitis C. "Right now, most of the usable organs from donors with hepatitis C are discarded because there are very few hepatitis C-positive recipients on the waiting list," says Niraj Desai, M.D., an assistant professor of surgery at Johns Hopkins University School of Medicine and senior author of the new paper, published in Annals of Internal Medicine.

Screening for hepatitis C virus (HCV) was found to be less than 13 percent among baby boomers, i.e., among individuals born between 1945 and 1965, reveals a new study. Early screening and treatment can prevent the rising rates of liver cancer in the United States.

What are the Causes of Hepatitis C infection?

Any practice, activity, or situation that involves blood-to-blood exposure can act as a source of HCV infection. 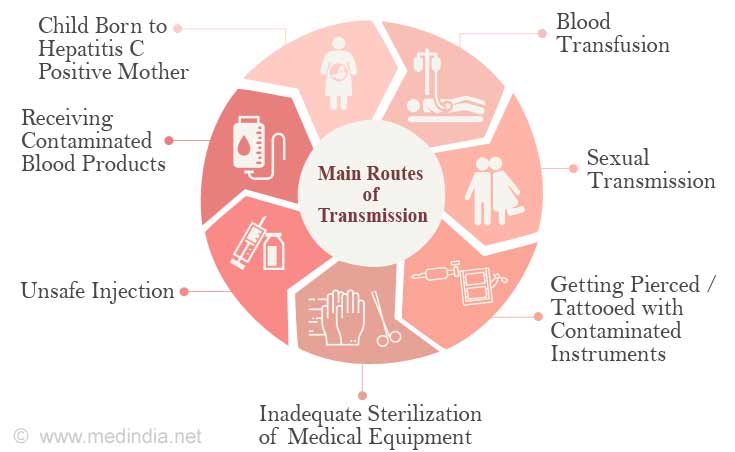 What are the Symptoms and Signs of Hepatitis C infection?

Acute and chronic variants of the disease exist.

Acute hepatitis C - This is a short-term illness that occurs anytime from 2 weeks to 6 months of getting exposed to the virus. But 80% of people infected with hepatitis C may not show any symptoms at all in the acute phase. Jaundice occurs in about 10% and it gets better.

Some common symptoms that people may exhibit are: 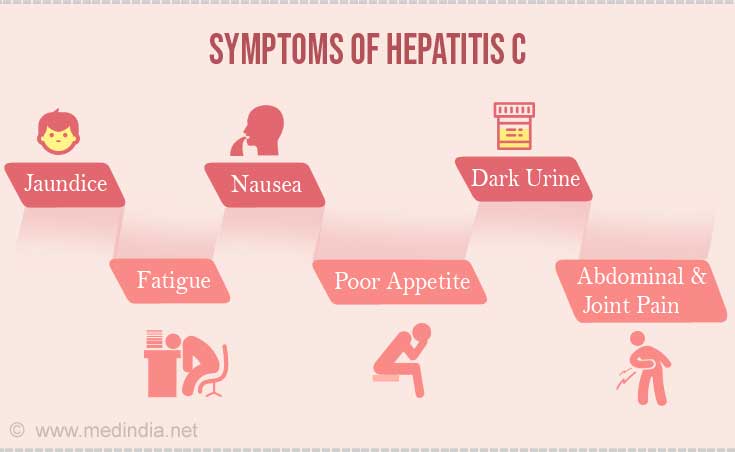 Chronic Hepatitis C - Most people who acquire infection with HCV develop chronic hepatitis. This is a long-term illness and can last a lifetime. The infection may take years or sometimes decades to produce symptoms. It may only be detected due to secondary infections due to liver damage. By the time they become ill and seek help, considerable damage might have been done. Persistence of the infection leads to permanent scarring of the liver (cirrhosis) or liver cancer.

How is Hepatitis C Infection Diagnosed?

1. Screening: Occasionally, hepatitis C gets diagnosed during screening tests, for example during blood donation. Otherwise, routine screening is recommended by WHO for all people who are at high risk.

Antibodies to the virus will be present irrespective of the presence of the virus at the point of testing. It is recommended to perform a follow-up test.

3. Genotype assays are usually performed for finding the type of viral genotype that has affected the patient.

4. Liver function tests are carried out to monitor the liver damage. The liver enzyme levels rise at seven weeks after infection but their rise may or may not be an indication of how severe the disease is.

5. Liver biopsy may be ordered if chronic hepatitis C infection is suspected. A small portion of the liver is removed using local anesthesia or a sedative to monitor damage to the liver. 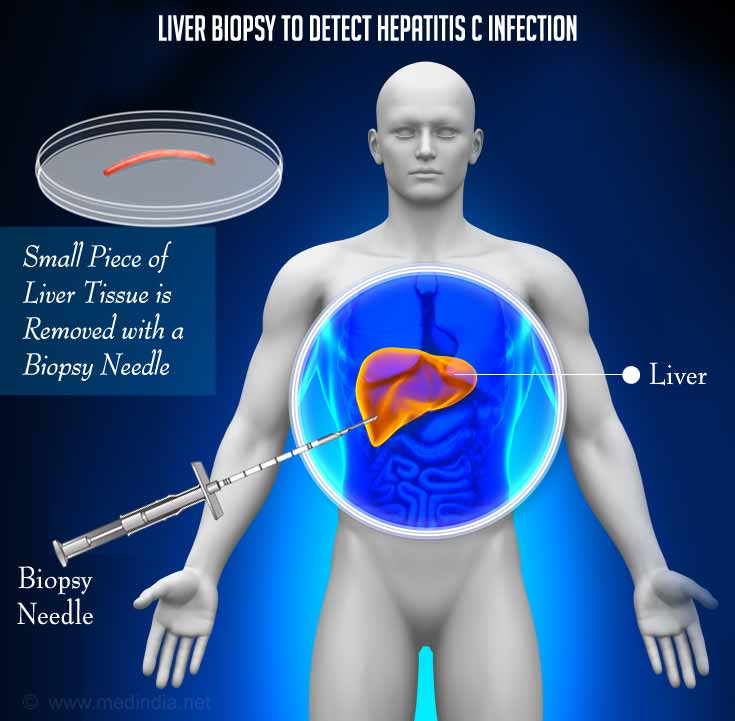 The person will have to lie down with the right arm raised above the head during and about 2 hours after the test. Certain medications might have to be stopped before the procedure and the person might have to fast for 8 hours.

The liver sample is examined under a microscope and analyzed by a doctor for any damage or disease. Changes in bile ducts and lymphocytes are visible.

What is the Treatment for Hepatitis C infection?

40-80% of patients with chronic hepatitis get better with treatment.

Proven hepatitis C virus infection is treated with antiviral medications. Treatment of hepatitis C targets removal of the virus from the blood and should be given to the patients according to the degree of liver scarring.

These medications were associated with a number of side effects. Flu-like symptoms occurred in half the patients and a third of them had emotional disturbances.

In 2016, WHO has recommended that direct-acting antiviral (DAA) regimens be used as far as possible instead of regimens with pegylated interferon / ribavirin.

DAA-based regimens have a shorter duration, are given orally, have a lower pill burden (one pill per day), are effective and well tolerated with few adverse effects. 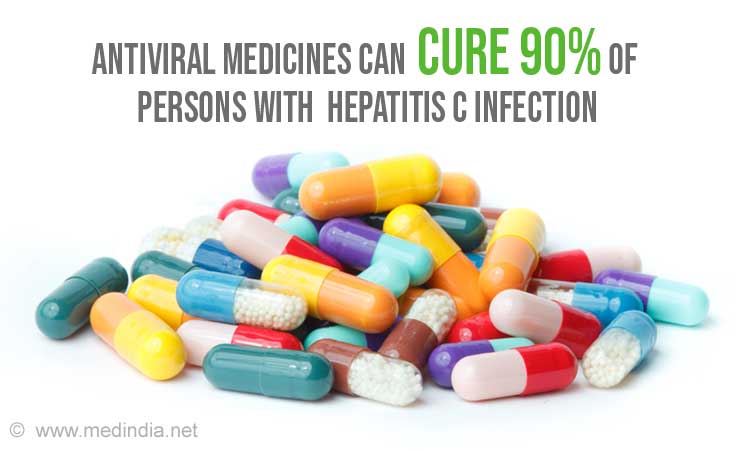 Liver transplant may be required in cases of liver cirrhosis and liver cancer. The virus recurs in 80-90% of patients who have undergone transplant. This can be decreased by using pegylated interferon and ribavirin post-transplant. The graft could get infected and develop into cirrhosis within 5 years in 10-30% of the people.

Complementary and alternative medicine (CAM) is the use of relaxation and  physical (like yoga and tai chi) techniques and consumption of herbal products. Physical and relaxation therapies are generally safe but more research needs to be done to consume herbal products while having liver disease. The National Center for Complementary and Integrative Health (NCCIH) a center of NIH is evaluating various products.

There is no special hepatitis C diet but a well-balanced diet can lead to better liver functioning and lowered risk of scarring. It also helps the immune system fight off the illness and keeps the blood sugar under control in case of concurrent diabetes.

What are the Complications of Hepatitis C infection?

Around 70-80% of patients infected with HCV develop chronic infection. 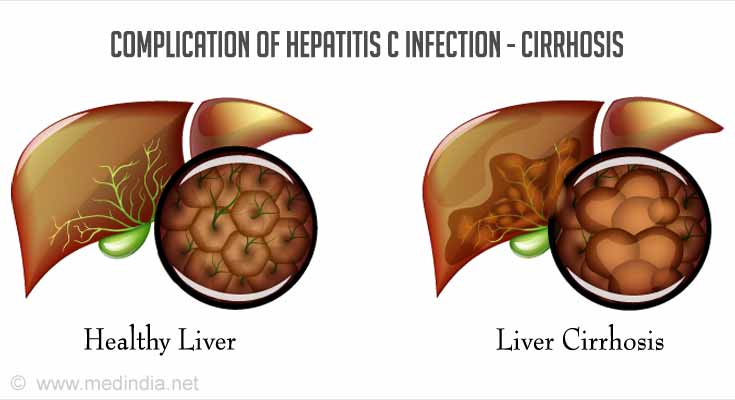 What is the Prognosis (Outlook) of Hepatitis C infection?

Outlook (prognosis) of hepatitis depends on a number of factors, the most important ones being:

How Can Hepatitis C Be Prevented?

Hepatitis C is preventable through safe practices. There are no available products that can prevent HCV infection as of now. Vaccines are yet to be developed. 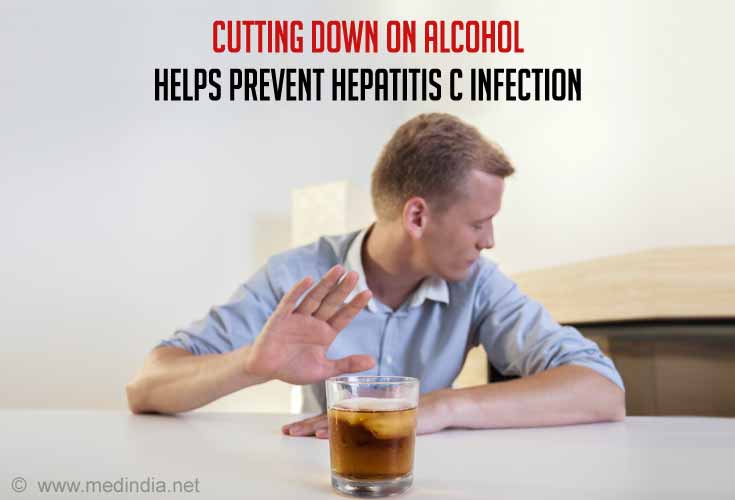 Liver Cancer - Animation
Liver is the largest organ inside the human body. It performs 500 different functions and processes 720 liters of blood per day. The important functions of the liver, the development of liver cancer and it's symptoms are presented in this ...

Liver Cancer Treatment - Animation
Liver Cancer is the uncontrolled growth of cells in the liver. The present section provides a graphic description of the various forms of liver cancer treatment in addition to the latest techniques such as Chemoembolisation and Radio frequency ...

Immunization in Children - Vaccination against viral hepatitis
Vaccines are available against Hepatitis B and also Hepatitis A. There are two hepatitis B vaccines available, a genetically engineered vaccine, and plasma derived vaccine.

Must Know Top Ten Facts about Hepatitis B Virus (HBV)
Hepatitis B is caused by the Hepatitis B virus (HBV). It is generally transmitted through infected blood and other body fluids.

Quiz on Jaundice
Jaundice is a condition which results in yellowing of the skin and sclerae (white of the eyes), and darkening of the urine. Test your knowledge on jaundice by taking this quiz. ...

New Treatments for Hepatitis C
Until very recently, infection with the Hepatitis C Virus (HCV) had been very difficult to treat, but new treatments now result in curing the disease in up to 90% of cases.

Neonatal Hepatitis
Neonatal hepatitis is an inflammation of the liver that usually occurs in early infancy and is typically transmitted to the baby by the infected mother.

Tests for Hepatitis
Hepatitis is an inflammation of the liver. Hepatitis virus panel is a series of blood tests to diagnose infections caused by hepatitis A, B and C viruses.

Blood-Borne Diseases
Blood-borne pathogens are microbes such as viruses or bacteria that are carried in human blood. Proper risk management may help reduce blood-borne disease prevalence.

Nutam (400mg) (Piracetam) Find a Doctor Sinopril (2mg) (Lacidipine) Hearing Loss Calculator Vent Forte (Theophylline) The Essence of Yoga Pregnancy Confirmation Calculator Find a Hospital Color Blindness Calculator Diaphragmatic Hernia
This site uses cookies to deliver our services. By using our site, you acknowledge that you have read and understand our Cookie Policy, Privacy Policy, and our Terms of Use