is a rare single gene, X- linked disorder, which tends to run in families.

To be pronounced as heem-o-FILL-ee-ah

In this bleeding condition, clotting of blood fails to take place in a normal manner. Following an accident, hemophilics suffer excessive bleeding, as it takes longer to heal, in comparison to normal individuals. This is due to a faulty clotting mechanism. Internal bleeding may also occur leading to organ damage, which may ultimately prove fatal.

Hemophilia is a condition, which only affects the males because it is an X-linked disorder. Males have only one X chromosome on which they carry a single copy of the Hemophilia gene, unlike the females who have two X chromosomes. If a mutant copy of the hemophilia gene is present, then males develop the disease. Women on the other hand, are non-symptomatic carriers. 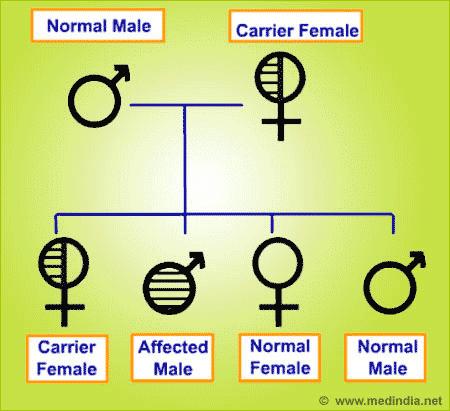 Hemophilia A is known to affect one in every 5000 males. Hemophilia B occurs in one out of every 25-30 thousand male births. In the United States 18,000 people have hemophilia.

Due to an inherent gene defect, individuals with hemophilia are born with little or no clotting factors. These are proteins that are vital for blood clotting.

Hemophilia can also be acquired during a persons lifetime when antibodies are developed against these clotting factors.

There is no cure for hemophilia. Treatment involves supplying the deficient clotting factor though infusion. If the patient stops responding to treatment after a period of time, then the dose of the factor administered needs to be increased or, alternatively, non-human factors should be tried. Recombinant, genetically- engineered products can also be administered to patients who are refractory.

People who suffer from hemophilia are recommended to do certain exercises pertaining to the elbows, knees and ankles. They can even do certain specific exercises that can bring relief to their joints, on a regular basis.

If the mother is a known carrier, Chorionic Villi sampling or amniocentesis can be done to determine the sex of the child. Clotting factor assay can be carried out using umbilical cord blood assay. The parents can then take an informed decision regarding continuation of pregnancy depending on whether the child is a male or a female.

Bleeding is the most important sign for hemophilia. In children or in adults, showing abnormal bleeding coagulation tests to detect and confirm the absence of coagulation factors and also to assess the type of hemophilia. Other forms of genetic tests with an increased specificity can also be done to confirm the diagnosis, if required.

Latest Publications and Research on Hemophilia

Blood Donation
Blood donation is a process of any consenting adult voluntarily agreeing to have his/her blood drawn for medical use. Know more about blood donation and how you can become a volunteer..

Blood Group Calculator
Blood group calculator gives you a detailed outlook of various blood groups, and also calculates the blood group of a child based on their parent's blood group and Rh type.

Anticoagulants
Anticoagulants prevent the clotting of blood in our body. They are administered orally or via injection.

World Hemophilia Day 2011
Hemophilia, earlier known as the 'disease of the kings' is a hereditary bleeding disorder that occurs due to lack of certain clotting factors.

Bleeding Disorders
Bleeding disorder is an acquired or an inherited condition, which is characterized by excessive bleeding in the persons affected by the problem.

Hemophilia - Beating the 'Bloody' Disorder
Meet the 'patient' leader who reaches out to fellow hemophiliacs on World Hemophilia Day 2011 with the message that it is possible to lead a successful life with hemophilia, the bleeding disorder.

Synovectomy - Surgical Procedure
Synovectomy is a surgical procedure in which a portion or whole of the synovial membrane lining the joint is removed.
Sign up for Wellness Consult a Doctor Sign up for Selfcare
Advertisement
Health Topics A - Z
A B C D E F G H I J K L M N O P Q R S T U V W X Y Z