The term Hallucination was coined by Sir Thomas Browne in 1646, derived from the Latin word alucinari, that means to wander in the mind.

Hallucinations can be classified in terms of the sensory modality that they occur. 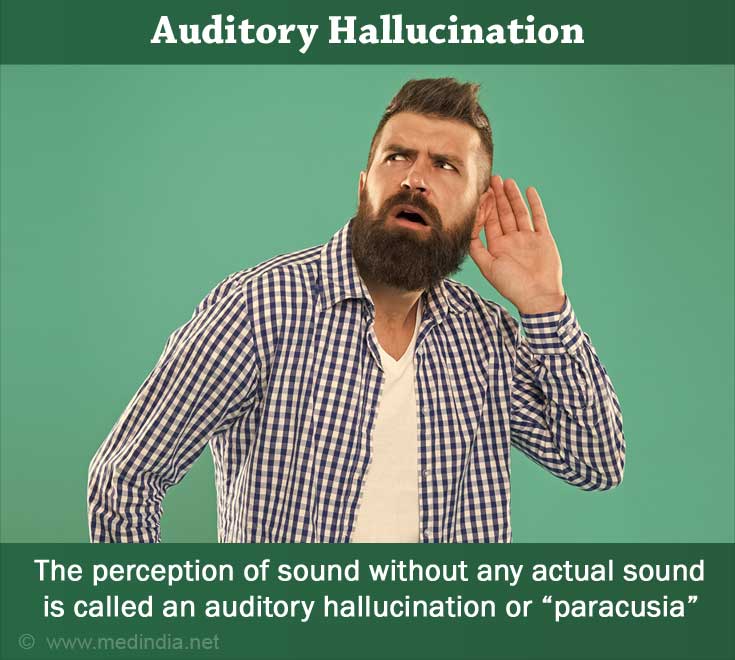 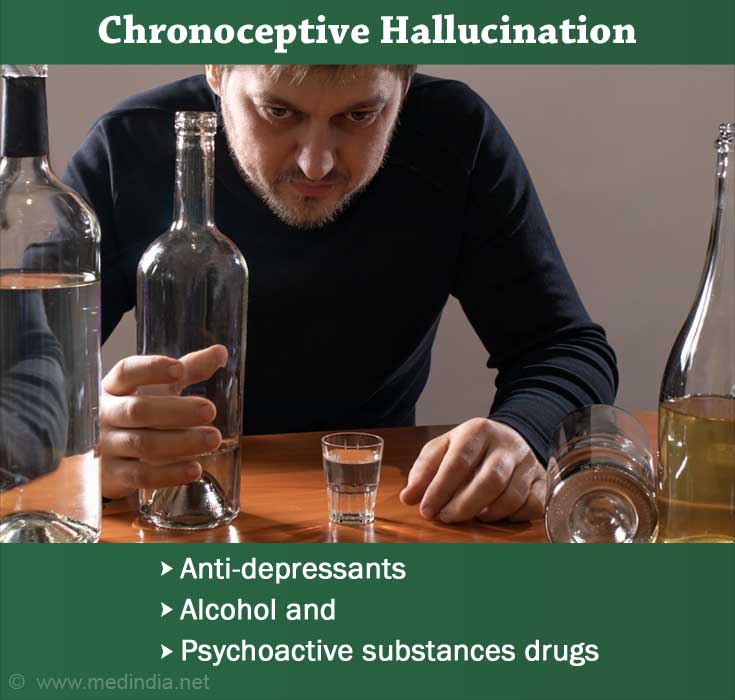 What are the Causes of Hallucinations?

Hallucinations can be caused by various factors and conditions. 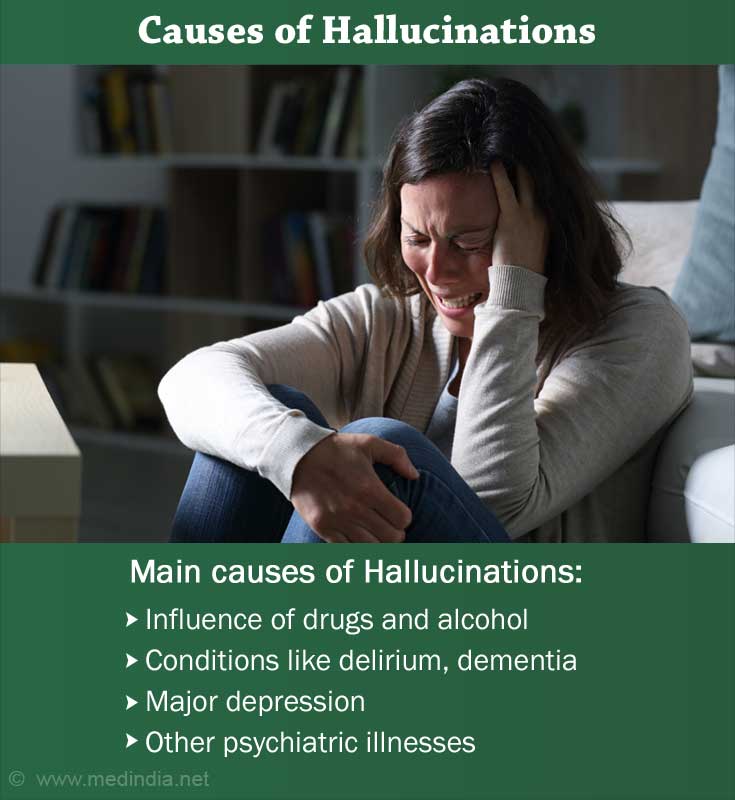 How to Diagnose Hallucinations?

If a person is suspected to have hallucinations, it is best to be with them at all times. The hallucinations can be dangerous as they may instigate fear and paranoia in the person, which in turn can make them take drastic actions. 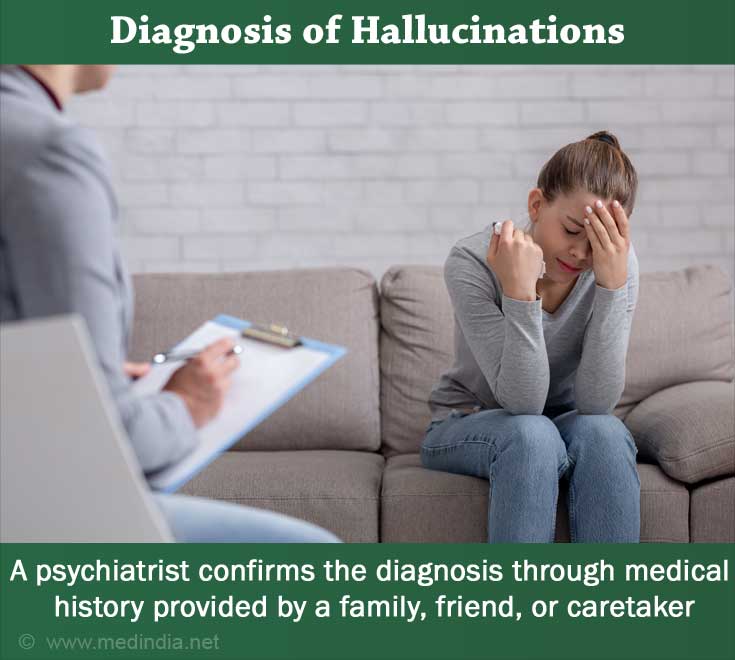 How to help a person who is having hallucinations

What is the Treatment for Hallucinations?

The treatment of hallucinations involves treating the underlying cause that may be organic or psychiatric. Some measures can be taken to manage or prevent hallucinations. For severe hallucinations, antipsychotic medications may be prescribed. 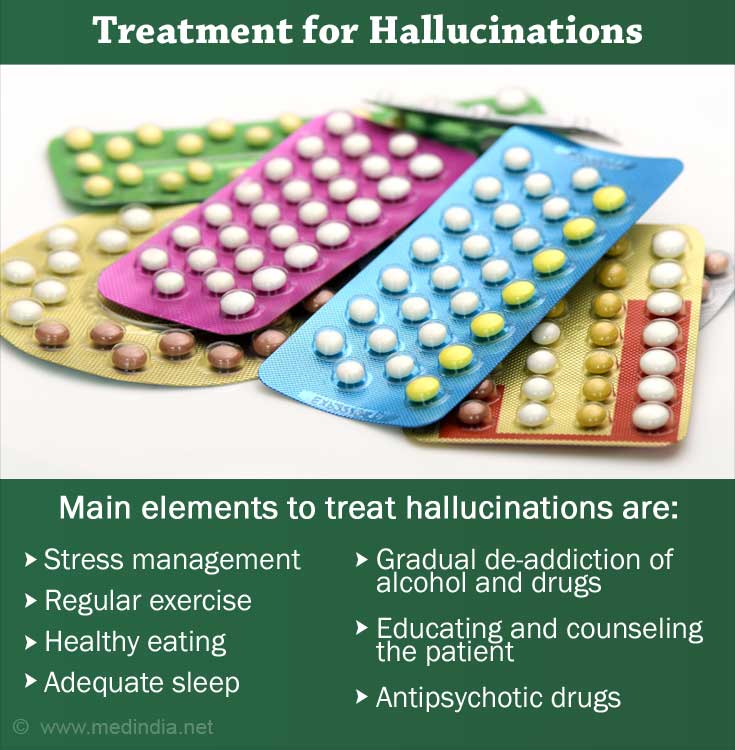 Recovery from hallucinations depends on the underlying cause of the condition. Hallucinations that occur due to toxicity of drugs, addiction and other organic reasons can recover better by staying away from the hallucinogenic agent. When hallucinations occur as a symptom of mental illness like schizophrenia and psychosis, antipsychotic medications and other treatments for the illness can help overcome hallucinations.

When hallucinations are recognized the person can follow some tips to keep them at bay.

Latest Publications and Research on Hallucinations

Delusions Delusions are firm beliefs by the person of something that is not logically or practically possible. The cause of delusions is believed to be unrealistic expectation and reasoning of a situation.

Quiz on Schizophrenia Schizophrenia is a mental disorder that affects young adults; nearly 7% of the adult population is affected by this condition. Check out how much you know about schizophrenia by taking this quiz. ...

Schizophrenia Schizophrenia is a mental disorder characterized by symptoms of thought, behavior and social problems.

Delirium Delirium is a sudden disturbance in mental function that causes confusion and decreased awareness of one's environment. It is classified into three subtypes - hyperactive, hypoactive and mixed.

Quiz on Drug Abuse Drug abuse often starts with experimentation of a drug and results in problems at home, workplace and in relationships. Take this quiz to test your knowledge on drug ...

Mental Health - Neurosis vs Psychosis Mental well-being is a concern and abnormal coping of emotions can lead to neurosis or psychosis. Mental illnesses can range from depression, anxiety, phobias to schizophrenia and affective disorders.