Granulomatosis with Polyangiitis (GPA) is a type of vasculitis that usually affects the upper airways, lungs and kidneys.

Granulomatosis with Polyangiitis (GPA) is a disease that belongs to a group of disorders called vasculitis. In these disorders, the body produces antibodies against blood vessels leading to inflammation. Granulomatosis with Polyangiitis (GPA) usually affects small and medium sized vessels. The inflammation could narrow the arterial lumen leading to decrease in blood supply to various organs. The arterial wall may also thin out leading to outpouchings called aneurysms. The aneurysms could burst leading to massive bleeding and death. Granulomas, which are local accumulations of cells, develop in the affected organs.

Granulomatosis with Polyangiitis (GPA) is a rare disease that affects people irrespective of age and sex, though people around 40 years of age are often affected. The upper airways are most commonly involved followed by the lungs and kidneys.  The patient may experience symptoms of sinusitis, bleeding and perforation of the nose, deafness or narrowing of the windpipe. He may develop inflammation of the lung and bleeding that could be fatal. The kidneys when affected result in a condition called glomerulonephritis, which could progress to kidney failure. Other organs like the joints, nerves, skin, brain and covering of the heart may also be affected. 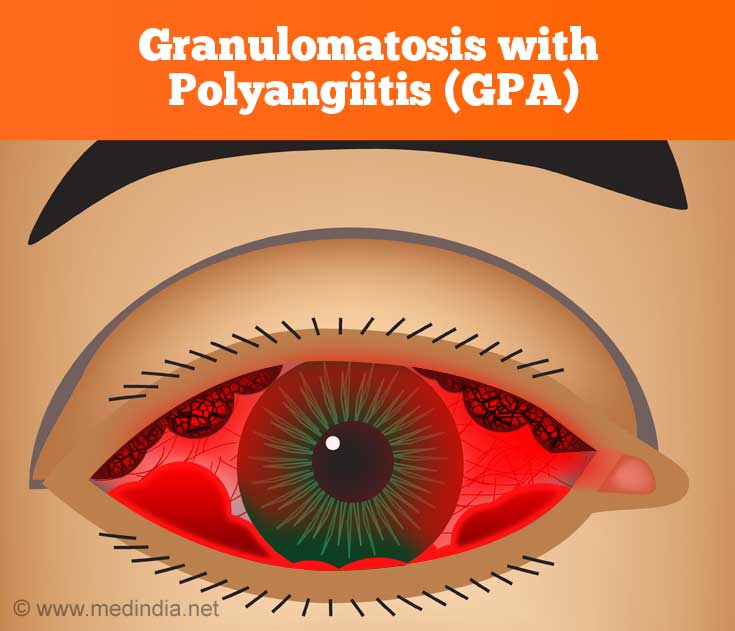 The patient is diagnosed using imaging studies like x-ray and CT scan. Other tests like biopsy of the affected organ and detection of a certain type of antibody called ANCA in the blood helps in confirming the diagnosis. The patient is treated with cyclophosphamide and corticosteroids, drugs that help to suppress immunity.  Since cyclophosphamide could cause severe side effects like bladder cancer, other drugs may be used to substitute it after initial improvement.  The patient may suffer from relapses. Granulomatosis with Polyangiitis (GPA) was invariably fatal when the treatment was not known; chances of survival have improved remarkably with the current treatment.

The disease is named after Dr. Friedrich Wegener, who described the disease in 1936.

Latest Publications and Research on Granulomatosis with Polyangiitis (GPA)

Takayasu Arteritis Takayasu arteritis is a type of vasculitis that affects the aorta and its branches.

Vasculitis Vasculitis is an inflammation of the blood vessels of the body that can affect people of all ages; it is usually due to an autoimmune disorder

Ways To Boost Your Immune System Do you feel stressed all the time? If yes, beware, for your immune system could be going downhill!
Sign up for Wellness Consult a Doctor Sign up for Selfcare
Advertisement
Health Topics A - Z
A B C D E F G H I J K L M N O P Q R S T U V W X Y Z