The word Gout is from Latin and it means drop. Known as "the disease of kings and the king of diseases," gout has been studied by physicians and has caused suffering in countless humans at least since the days of Hippocrates.

Gout afflicts an estimated 840 out of 100,000 people. Gout is strongly associated with obesity, hypertension, hyperlipidemia and diabetes. Gout is a condition with abnormally high levels of uric acid in the blood. It is characterized by recurring attacks of joint inflammation (arthritis), deposits of hard lumps of uric acid in and around the joints and decreased kidney function and kidney stones. 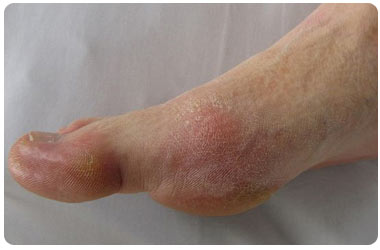 Gout is an hereditary disorder, the intrinsic element of which is an inborn instability of nuclein metabolism which may remain latent, but under the influence of extrinsic factors, infections, becomes manifest, as betokened by local inflammatory tissue reactions in joints or elsewhere the specific character of which is attested by the associated uratic deposition. - Richard Llewellyn Jones Llewellyn, 1885

Latest Publications and Research on Gout

In the past two years I've had over a dozen onsets of this; in the last four months though, it has become more "ongoing" with currently counting 3 episodes and currently experiencing pain. My doctors in the past said nothing more than tendinitis and I know that's not what it is. Recently though, with the pain I'm having I decided to google the information. All the symptoms seem to be relevant to symptoms written.
The only difference; my pain goes straight up my leg (on the inner part kind of like running up my main artery). I can't bend my knee because the pain on the underside is horrible. I can't stand because the top of my foot is so swollen, red and "water logged" that I end up just sitting with my foot up for a good 5-10 days. Please tell me what questions I should ask my doctors.

Kidney Stones
A kidney stone is a solid mass made up of tiny crystals and may appear in any area of the urinary system.

Quiz on Gout
Does your big toe tend to swell up and pain often? It is possible that you may be suffering from gout. Test your knowledge and learn more about gout by taking this quiz. ...