is a disorder of purine metabolism, in which an excess of uric acid appears in the blood. The salts of uric acid are then deposited as small concrete particles (called Tophi) in the joints and other tissues.

Purine is a component of RNA and DNA and is also found in many foods such as liver, sardines, other flesh foods, some pulses and vegetables. It breaks down into a weak organic acid called as and in the process releases energy that is used for other chemical reactions in the body. Thus the sources of can be exogenous and endogenous as well. Normally, uric acid is dissolved in the blood and passes through kidneys into the urine, where it is eliminated. 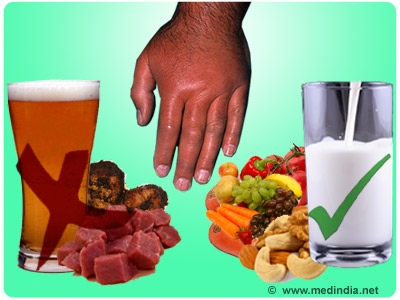 Increase in uric acid levels in the blood (hyperurecemia) could be due to three major reasons:

Hyperuricemia by itself is not dangerous. However, if excess uric acid crystals form due to hyperuricemia, gout can develop. The crystals accumulate in the joint, causing inflammation. Blood uric acid level above 7.0 milligrams / deciliter (dL) may be indicative of gout. The amount of uric acid in the blood normally increases from 3 to 15 times as compared to normal.

There are sudden severe episodes of pain and tenderness, redness and swelling in some joints. It usually affects one joint at a time and it is often the large joint of the big toe. It can also affect other joints like the knee, ankle, foot, hand, wrist and elbow joint.

There are many risk factors cited for the appearance of hyperurecemia and gout.

Latest Publications and Research on Gout and Diet

Women With Gout at Greater Risk of Heart Attack Than Men New research published ahead of print in the Annals of the Rheumatic Diseases says that women with gout are at greater risk of a heart attack than men with the disease.

Sugar-sweetened Soft Drinks Raise Gout Risk in Women A study has revealed that sweetened drinks can increase the risk of gout in women.

Diet for Kidney stones Diet for kidney stone should comprise of calcium-rich foods, increased fluid intake. Other dietary recommendations depends on the type of kidney stone.

Urinary System The urinary system produces, stores and eliminates urine and other waste substances excreted by the kidneys. Here are some interesting facts about urinary system.

Gout High levels of uric acid in blood and recurring attacks of joint inflammation are the main symptoms of gout. Lifestyle changes like weight loss, increasing fluid intake and dietary changes can help.

Quiz on Gout Does your big toe tend to swell up and pain often? It is possible that you may be suffering from gout. Test your knowledge and learn more about gout by taking this quiz. ...

Acid Base Dietary Balance and its Influence on Our Health and Well-being Our lifestyles and eating habits can lead to acid build up and push the body to an unhealthy state. Understanding alkaline body state is important for our long term health.
Sign up for Wellness Consult a Doctor Sign up for Selfcare
Advertisement
Health Topics A - Z
A B C D E F G H I J K L M N O P Q R S T U V W X Y Z