In , antibodies are formed against the basement membranes of the lungs and the kidneys.

Goodpasture syndrome is an autoimmune condition that affects the kidneys and the lungs. In a normal person, antibodies are produced to fight against anything foreign like an infection. In an autoimmune disease, the body produces antibodies that fail to recognize parts of the body, mistake them to be foreign and launch an attack against them. 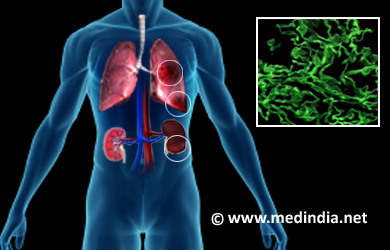 People at increased risk for suffering from Goodpasture syndrome include:

In Goodpasture syndrome, antibodies are formed that attack the collagen tissue on the basement membrane in the kidneys and the lungs. These antibodies are called anti-GBM antibodies.

The damage inflicted by anti-GBM antibodies to the basement membrane lining of the air sacs in the lungs results in bleeding into the alveoli. This could further lead to respiratory failure and severe blood loss.

Similar damage to the basement membrane in the glomeruli of the kidneys results in loss of protein and blood in the urine. The white blood cells form crescent shaped structures in the glomeruli, leading to a condition called glomerulonephritis. This could be followed by kidney failure in severe cases.

Symptoms in Goodpasture syndrome depend on which organ is affected. Diagnosis depends on demonstration of anti-GBM antibodies in the blood of patients. In some cases, a kidney biopsy may be required.

The aim of of Goodpasture syndrome is to control symptoms, remove excess antibodies from the blood via a process called plasmapheresis, and prevent the formation of new antibodies by using immunosuppressive drugs. Treatment in the intensive care unit (ICU) may be required in cases where the lungs are severely affected. Dialysis or kidney transplant may be required in cases where the kidneys are severely damaged.

Glomerulonephritis Types Glomerulonephritis is a group of diseases that infect the part of the kidney that filters the blood. It can be of various types based on its mechanism.
Sign up for Wellness Consult a Doctor Sign up for Selfcare
Advertisement
Health Topics A - Z
A B C D E F G H I J K L M N O P Q R S T U V W X Y Z