The disease is deemed as a major public health burden worldwide, with a rising prevalence of nearly 87 million new infections per year.

Gonorrhea does not always cause symptoms. In men, it can cause pain and burning sensation when urinating, and discharge from the penis. In women, gonorrhea can cause pain when urinating, bleeding between periods, and yellowish discharge from the vagina. If left untreated, it can lead to complications like epididymitis (inflammation of the tube at the back of the testicle) in men and pelvic inflammatory disease (infection of the female reproductive organs) in women, which causes infertility.

Gonorrhea can be cured with antibiotics. Correct usage of latex condoms greatly reduces but does not completely eliminate the risk of transmission of gonorrhea.

What are the Causes of Gonorrhea?

Gonorrhea is caused by a bacterium called Neisseria gonorrhoeae.

A person can get infected with gonorrhea by having any kind of sexual contact with an infected person. It can also be spread from an untreated mother to her baby during childbirth.

The bacteria can grow and multiply quickly in moist, warm areas of the body such as the cervix, uterus, and fallopian tubes in women, and urethra in both sexes. It can also grow in the mouth, throat, eyes, or rectum.

People who are more likely to develop this infection are - 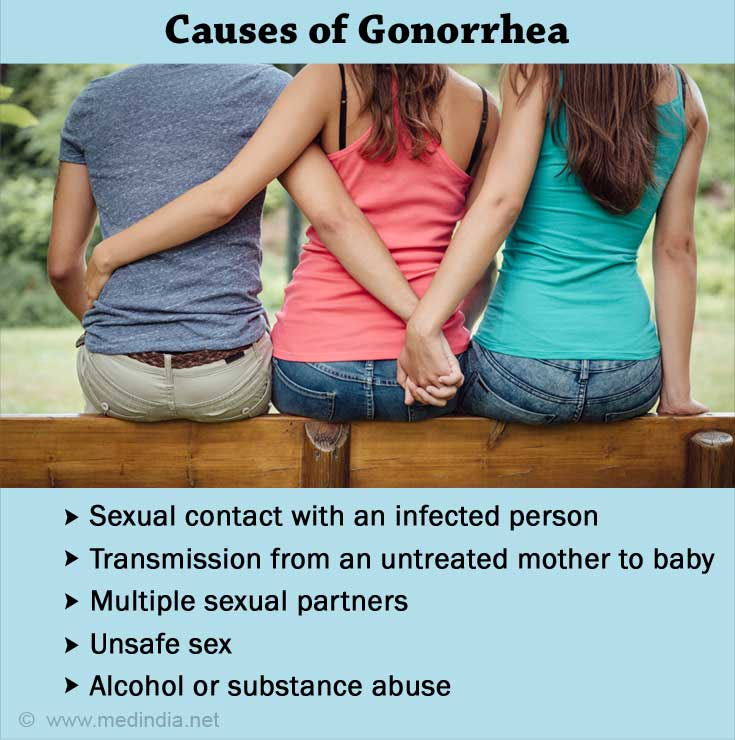 What are the Symptoms of Gonorrhea?

Symptoms of gonorrhea usually appear within 2 to 14 days after infection. They may be totally unaware that they have caught the infection. This increases the risk of transmission.

Symptoms of gonorrhea in men include- 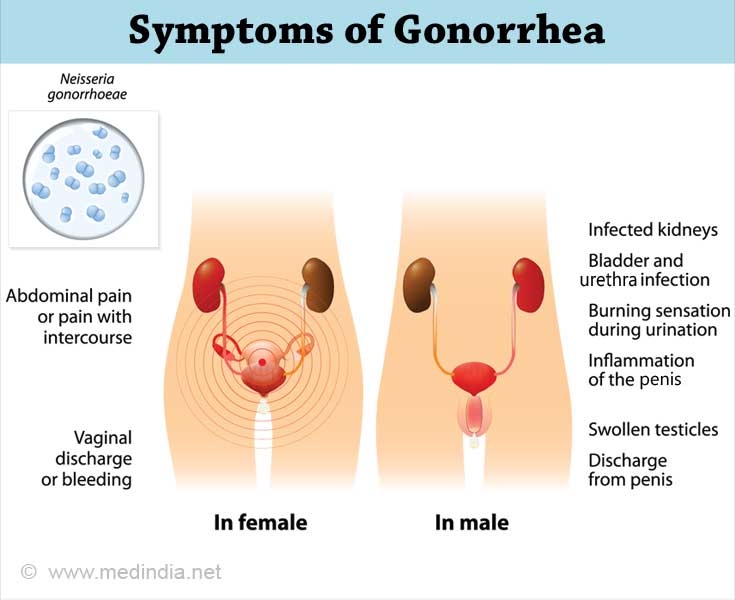 Symptoms of gonorrhea in women include-

Symptoms of rectal infection in both men and women include -

If the infection spreads to the bloodstream, it may cause fever, joint pain, and sparse peripheral rash.

How can we Diagnose Gonorrhea? 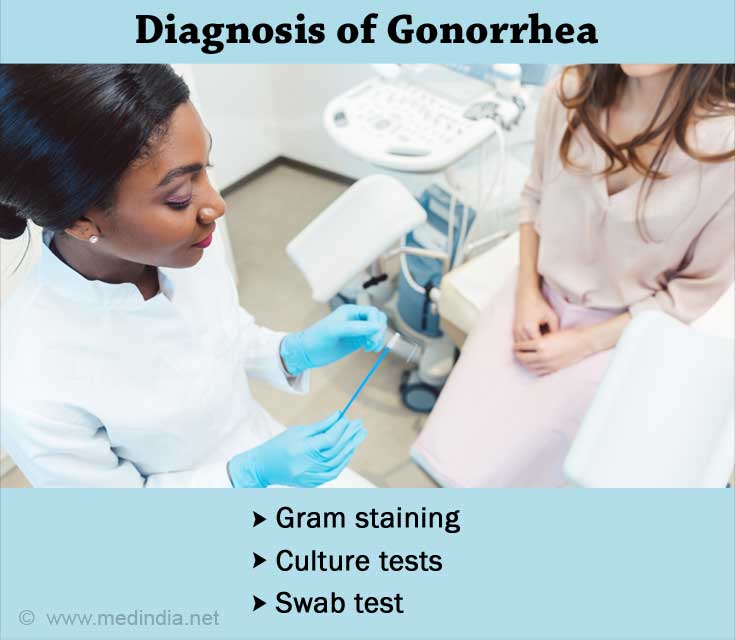 A healthcare provider can obtain a sample of tissue or fluid from the infected mucus membrane (cervix, urethra, rectum, or throat) and send the specimen to a laboratory for analysis. In the laboratory, this smear is stained with a dye and the bacteria are viewed through the microscope. Although this test is quick, it is not very reliable.

The culture test involves placing a sample of the discharge onto a culture plate and incubating it for up to two to three days to allow the bacteria to multiply. This test provides absolute proof of infection. Cultures can provide a preliminary diagnosis within 24 hours and a confirmed diagnosis within 72 hours.

The samples for this test may be obtained from the cervix of women, urethra of men, throat, rectum, joint fluid, or blood, depending on the likely site of infection.

Frequently, doctors use urine or cervical swabs for a new test that detects the genes of the bacteria.

How can Gonorrhea be Treated?

Gonorrhea is treated with antibiotics. Gonorrhea can be cured with proper treatment. Medicines will stop the infection but will not repair any permanent damage done by the disease. 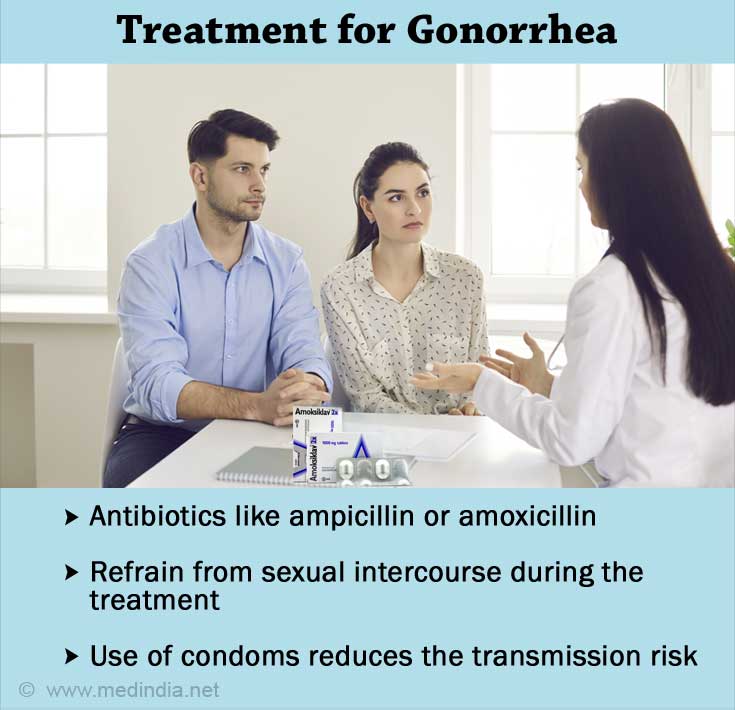 Penicillin derivative antibiotics such as ampicillin or amoxicillin are recommended for the treatment of gonorrhea. Since resistance to penicillin is increasing, other antibiotics can be given like ceftriaxone or spectinomycin.

Women who are pregnant should not be given doxycycline and are usually given an alternative antibiotic such as erythromycin.

All medications should be taken as prescribed, and the infected person should refrain from sexual intercourse during the course of treatment.

It is also important to locate and test the sexual partners of the infected person and treat them to prevent the further spread of gonorrhea.

Antimicrobial resistance in Neisseria gonorrhoeae has reached an alarming level in todays era. It has been ranked as one of 12 antimicrobial-resistant bacterial species that pose the greatest risk to human health as per The World Health Organization (WHO).

Experts fear that the dangerous condition would present the superbug quickly become untreatable. Subsequent treatment failures would then ultimately lead to expanded medical costs and a decrease in human general and reproductive health.

This may compute to the prevailing load of the disease which mandates the demand for medical researchers around the world to pursue alternative treatments.

Chink in Armor to Combat Superbug

Hence scientists at Flinders University and the Australian National University have examined the prime mechanism for antimicrobial resistance in this crafty organism, as per the study A unique sequence is essential for efficient multidrug efflux function of the MtrD protein of Neisseria gonorrhoeae, published in the journal mBio.

We need to find the strengths and weaknesses in these species and in this study we have focused on the manner by which drugs are pumped out of these cells which helps the superbug become more resistant and able to survive treatment by multiple drugs, says lead author Flinders University Professor of Microbiology Melissa Brown.

The team has identified a region unique to the drug pump that plays a role in positioning the protein in the surface of the bacteria enabling it to function optimally. The study thus paves the way for the future target for antibiotic or antimicrobial development in treatment options.

Latest Publications and Research on Gonorrhea

omg i just found out i have got Gonorrhea is caused by a bacteria Neisseria that grows and multiplies quickly in moist, warm areas of the body such as the cervix, urethra, mouth, or rectum and i am really fucken scared how do i tell my corey hillery?

thats realy not nice at lest be nice to that person!!!...

AIDS/HIV
"AIDS is an epidemic disease, a potentially preventable, deadly infection for which there is no cure, no vaccine, and it is not under control." - National Commission on AIDS, 1993.

Syphilis
Syphilis is a sexually transmitted disease caused by the spirochete bacterium. Syphilis can be passed from mother to her baby during pregnancy.

How to use a condom - Animation
This Interactive provides step by step visual aid showing how to correctly use condoms which can prevent transmission of HIV, other sexually transmitted diseases and pregnancy

Vaginitis
Vaginal infection or vaginitis occurs due to an overgrowth of bacteria or yeast or trichomoniasis and is aggravated by chemicals, like soap and deodorants