The term glycosuria or glucosuria indicates the presence of glucose in the urine. Usually, the kidneys absorb the blood glucose back into the bloodstream and it does not allow the glucose to be excreted. However, in a condition like diabetes mellitus, the kidneys are not able to reabsorb the glucose and some of it is lost in the urine and leads to glycosuria. The loss of glucose in urine also results in loss of water due to excessive urine production (diuresis), leading to dehydration of the body. The most common cause of glycosuria in our body is Diabetes Mellitus.

Most urine tests for sugar are done using standard 'dip-stick or a strip' and are used more as a screening test or for self-monitoring of diabetes rather than as a definitive test for diagnosis. A blood test will be required for the diagnosis of diabetes. 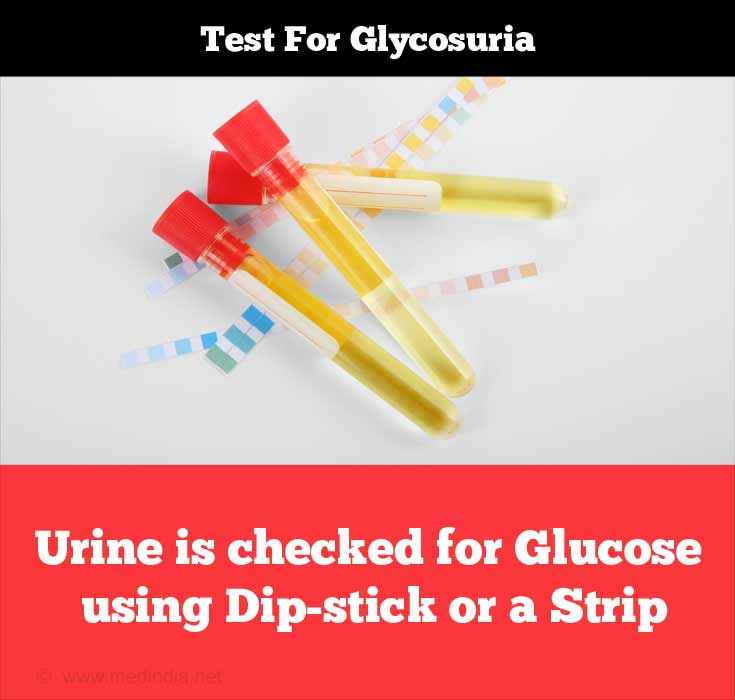 Nephrons are the smallest functional units of kidneys. Blood flows from the arteriole into the kidneys special capillaries called glomerulus. These capillaries are surrounded by a capsule called Bowmans capsule which absorbs the filtrate  a mixture of water, solutes like glucose, sodium, potassium and amino acids and waste products such as urea. Some of these solutes, including glucose, are reabsorbed back into the bloodstream. The nephrons are able to take back sugar from the filtrate only up to a certain level of glucose concentration in the filtrate. When the blood glucose level exceeds 160 to 180 milligram per deciliter (mg/dL), the tubules cease to absorb the glucose back into the bloodstream and this filtrate along with glucose is excreted in the urine. This is called renal threshold or RTG. The rate at which glucose is reabsorbed into the bloodstream from the filtrate is called glucose reabsorption rate.

When the blood glucose level exceeds about 160  180 mg/dl, there is a saturation of the reabsorbed filtrate and glucose is excreted in urine. 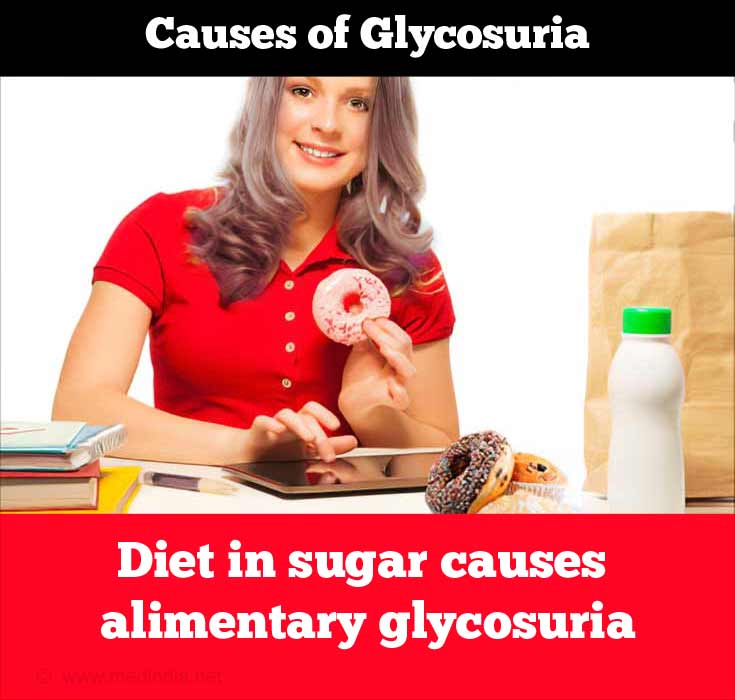 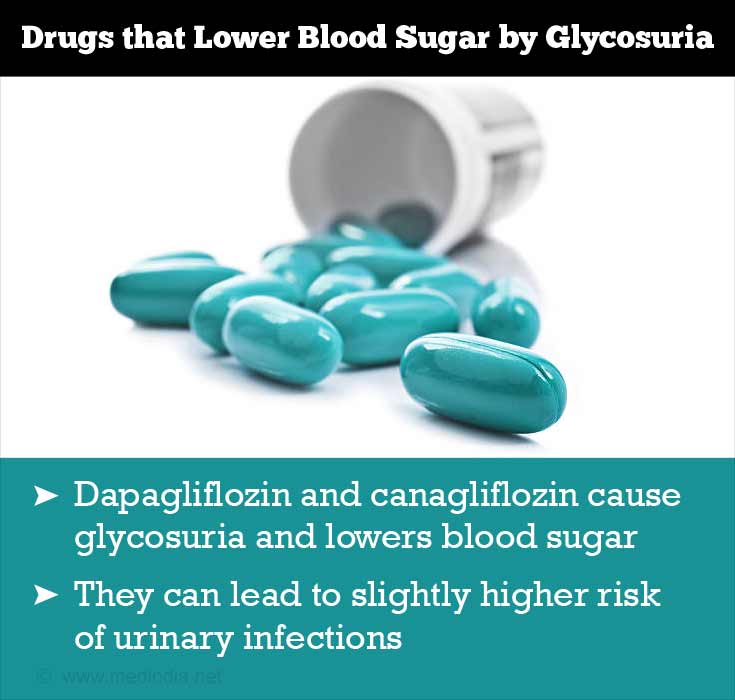 Other possible causes of glycosuria include:

Based on the rate of absorption and renal threshold, benign glycosuria is categorized into three types:

Type A: Most common type of glycosuria where there is a decline in both glucose threshold and maximal glucose reabsorption rate.

Type B: The rate of reabsorption is normal but there is a decline in the renal threshold.

Type O: Glucose reabsorption does not happen in the kidneys. There is a lot of glucose excreted through urine though blood glucose, glucose tolerance and insulin levels are normal.

Glycosuria may not present with any obvious symptoms. Pregnant women may have asymptomatic glycosuria but test positive for glucose in urine. This may not indicate any medical problems except that it could be a warning sign of gestational diabetes.

Symptoms may occur when the glycosuria is persistent and these may be subtle indicator of dehydration or the diuretic effect of the sugar. This may result in - 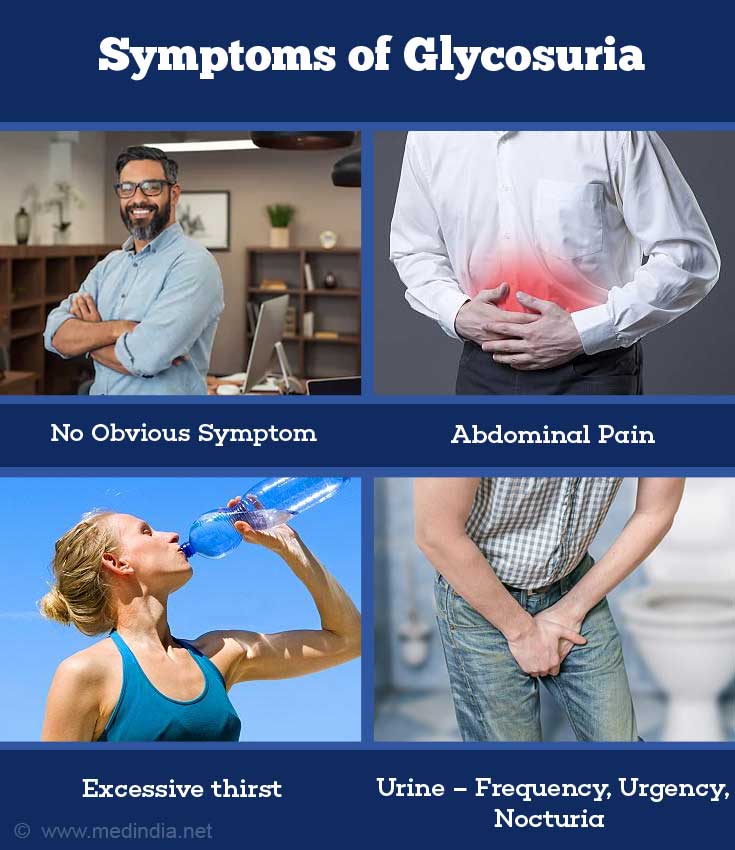 If there is urinary infection it may manifest with pain in the kidney area, fever with chills and shivering and urinary frequency. Urine tests may reveal excretion of glucose along with a large number of white blood cells and protein trace.

Historically, glycosuria was detected by tasting the urine or with its distinctive sweet scent. Currently, urine dipstick analysis reveals the presence of excessive amounts of glucose. Further urine tests confirm the exact concentration of glucose in urine.

However it is wise to confirm this with a blood test of fasting and post prandial glucose along with HBA1C reading.

There are other medications too including - Nitrofurantoin, p-aminosalicylic acid, phenazopyridine, probenecid, and X-ray contrast media.(2✔ ✔Trusted Source
Review of Drug Interference with Urine Glucose Tests.

The cause of glycosuria determines whether the condition is chronic or acute.

However, the presence of glucose in urine is not necessarily a serious or life-threatening condition.

There is a condition called Familial renal glycosuria (FRG). In this condition the kidney function is normal and there is persistent renal glycosuria in isolation without any kidney disorder. This is due to the mutations in the SLC5A2 gene. In this condition treatment is not typically required.(3✔ ✔Trusted Source
Novel SLC5A2 Mutation Contributes to Familial Renal Glucosuria: Abnormal Expression in Renal Tissues.

Reducing the amount of sugar consumption, both direct and indirect ways can help prevent high sugar levels in urine.

Glycosuria symptoms depend on glycosuria causes and may not always indicate high blood sugar levels. Renal glycosuria may show negative in blood glucose tests but positive in glucose urine.

Latest Publications and Research on Glycosuria

Urinary Tract Infection - Urinalysis
The urinalysis is the most important initial study in the evaluation of the patient suspected of having a UTI. A negative urinalysis makes the diagnosis of UTI unlikely.

Definition of Proteinurria
Distance education for A Diagnostic approach to Proteinuria

How Does The Body React To Stress
Physical symptoms of stress on the body are varied, ranging from hormonal changes to changes in the nervous system, manifesting as the flight-fight-freeze response.

Blood - Sugar Chart Hearing Loss Calculator The Essence of Yoga Color Blindness Calculator Drug Side Effects Calculator Selfie Addiction Calculator Find a Hospital Accident and Trauma Care Blood Pressure Calculator Find a Doctor
This site uses cookies to deliver our services. By using our site, you acknowledge that you have read and understand our Cookie Policy, Privacy Policy, and our Terms of Use