Genital herpes was so common among prostitutes in the 18th century that it was called "a vocational disease of women. It has now been established to be a viral infection brought on by the herpes simplex viruses type 1 (HSV-1) or type 2 (HSV-2). The majority of genital herpes infections are caused by HSV-2 whereas HSV -1 usually causes herpes labialis or oral herpes. 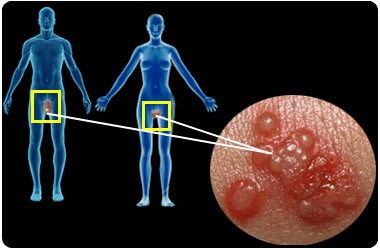 Most affected individuals have little or no signs or symptoms; and when symptoms do appear, it is in the form of blisters around the genital area or anus. These blisters break, leaving sores that usually take about a fortnight or a month to heal. Another outbreak may soon follow, but it is often less severe and may also last less longer than the first episode.

The frequency of breakouts tends to reduce with time. The infection, however, lasts indefinitely in an affected person.

Genital herpes is a common infection in the USA where about one in six people between the ages of 14 to 49 years has the HSV-2 infection. It appears to be more common and more aggressive in women than in men.

Tests used to diagnose genital herpes include culture of the blister fluid, polymerase chain reaction and blood tests to check for antibodies to the virus.

Patients are treated with antiviral drugs like acyclovir, valacylovir and famiclovir. Spread of infection to the sexual partner may be avoided through abstinence or by using condom during sexual intercourse.

Youâre indeed a man of your words Oduku Paul on YouTube, after purchasing and using his herbal product for HSV 1 and 2 i was totally cured within few days. Thanks to Dr Oduku Paul for the fast recovery.. WhatsApp 2349064430408

Being Herpes Patient can be one of the most difficult experiences you go through in life. You may feel scared, sad or even angry â this is OK, and a completely natural part of coping with something that can be life changing. It will probably take a while for the news to sink in. My name is Janey cooker and i am from the United States, I remember spending so much money buying drugs from hospitals hoping that I will be cured from HERPES INFECTION, but all to no avail. I contacted so many doctors and they prescribe medicine for me which they indeed tried their best but was unable to provide for me a possible cure, luckily i saw a comment about a herbal doctor, [Oyama] am always forever grateful after using his herbal medicine i was cured from herpes if you are out there kindly reach him WhatsApp or email 2348108264684 droyamasolutiontemple @gmail. com He has the remedy to cure, Diabetes Cancer Autism COPD ALS Hepatitis HPV HIV/AIDS Pregnancy Infertility/Fertility Fibroid Contact him for All kind of STD/STI He all Restore Your Health.

Genital Herpes: Myths and Facts
Genital herpes is caused by herpes simplex virus which affects the genital region. Break outs are common on the face leading to cold sores.

Quiz on Genital Herpes
Genital Herpes is a Sexually Transmitted Disease(STD). Take the following quiz to check your knowledge about this ...

Shingles
In 'Shingles' or 'Herpes Zoster' painful skin rashes appear usually on the side of chest wall. It is caused by chicken pox virus called varicella zoster.