Downs syndrome, also referred by some, as Mongolism is a genetic condition that arises due to an extra copy of all or part of chromosome 21. The condition was named after Langdon Down who first described this syndrome. 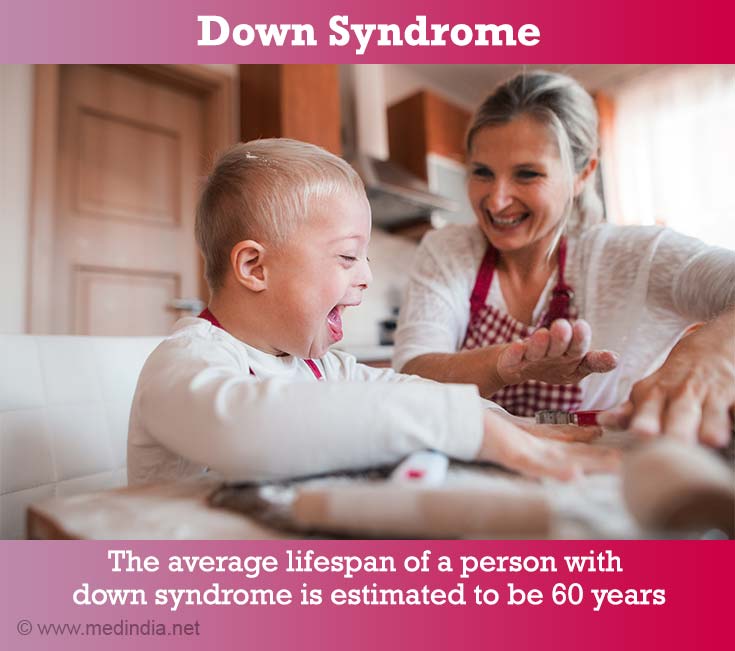 Children with Down syndrome have delayed milestones. Most exhibit poor cognitive skills, but many of them learn several skills during their lifetime.

There are several prenatal tests that may be carried out on high-risk mothers to detect a Down syndrome fetus. They are-

A karyotyping done on a blood sample from a Down syndrome individual will help to confirm the diagnosis.

Down syndrome cannot be cured but thankfully many of the clinical symptoms of this disorder can easily be managed. Several affected individuals lead near-normal lives.

Advanced maternal age (> 35 years) is found to be associated with an increased risk of Down syndrome.

Death may occur in the first year of life due to congenital heart defects.

But many of these individuals become adults and are capable of leading a normal life. They can be trained to be independent, with some of them even being able to go for jobs.

Birth Defects - Infections Birth defects are abnormalities, which occur before the birth of the baby and can be caused due to genetic, environmental and other unknown reasons.

Metabolic Defects Metabolism is the sum total of all chemical and physical changes that take place in any organism that enables it to function and grow.

Amniocentesis - Animation Amniocentesis is a procedure done after 15th week of pregnancy to obtain samples of the amniotic fluid to test for genetic disorders. A simple animation depicting the procedure.

Down Syndrome Down Syndrome is a congenital disorder among children commonly born to older mothers. The condition is also known as 'Up syndrome' because of the cheerful persona of the Down children.

Epigenetics In the recent years 'epigenetics' represents inheritable changes in gene expression that do not include DNA alterations.

Small Eye Syndrome Small eye syndrome is medically known as microphthalmia. It is a disorder in which one or both the eyes of the newborn baby are underdeveloped.

Achondroplasia Achondroplasia is a rare genetic disorder of bone growth that causes short-limbed dwarfism. It occurs due to mutations in a single gene called the FGFR3.

Choanal Atresia Choanal atresia is a congenital condition in which respiratory function is impeded because of an obstruction of the nasal passage with abnormal skeletal and tissue growth.

Multiple Osteochondromas / Hereditary Multiple Exostoses Hereditary multiple exostoses is a genetic disorder that causes skeletal abnormalities. Read on about its causes and symptoms and also how this symptom can be diagnosed and treated.

Genes may Guide Intelligence throughout Life Ever wondered how your intelligence level is different from others? learn more about how genetic makeup can guide intelligence during your lifespan
Sign up for Wellness Consult a Doctor Sign up for Selfcare
Advertisement
Health Topics A - Z
A B C D E F G H I J K L M N O P Q R S T U V W X Y Z