What is Extra Pulmonary Tuberculosis?

Extra pulmonary tuberculosis is the infection of tissues and organs other than the lungs by Mycobacterium tuberculosis and a few related organisms. It is most commonly a sequel of lung infection by the same organism.(1✔ ✔Trusted Source
Extrapulmonary Tuberculosis. A review

Go to source) Pulmonary tuberculosis is one of the most common and prevalent infections in India, because of multiple reasons. There are many risk factors for tuberculosis, which include immunocompromised states, overcrowding, and smoking among others. The classical symptoms of pulmonary tuberculosis include persistent low grade fever, cough with expectoration loss of appetite and weight.

The symptoms of extra pulmonary tuberculosis are more varied, but fever and weight loss are present in the majority of cases. The treatment of tuberculosis in general, is standardized by various bodies in the world, and is effective in curing the disease. In India, the RNTCP protocol is the preferred model of diagnosis and treatment. As with any preventable disease, though, prevention is definitely better than cure, and simple methods such as universal vaccination help to decrease the risk of transmission of infection.

What is Pulmonary Tuberculosis?

Go to source) Once the bacteria inside these droplets reach the lungs, three things can happen depending on the immunity of the person inhaling them:

The symptoms of active pulmonary tuberculosis include: 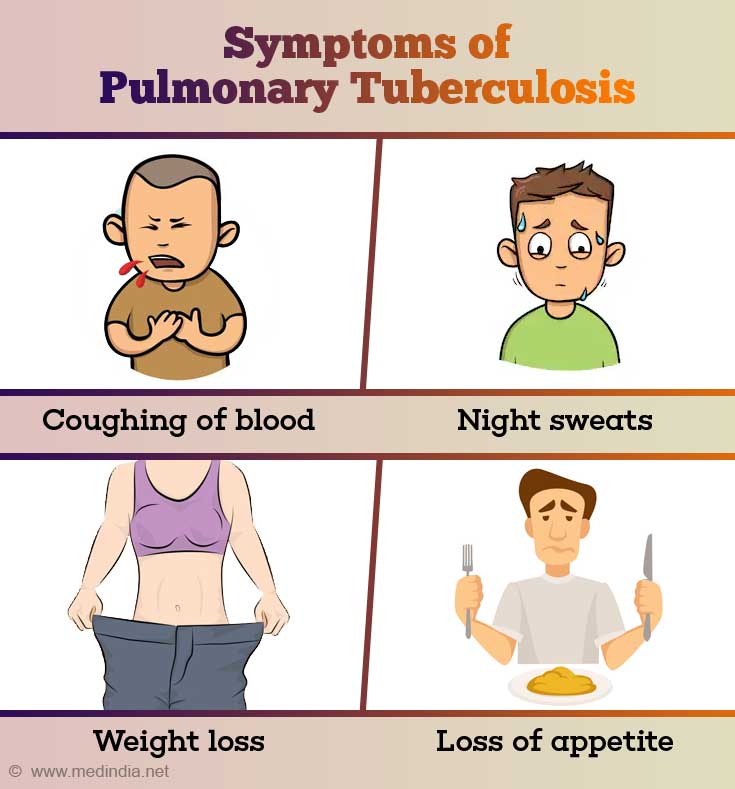 What is Extrapulmonary TB?

This is the most common form of extra pulmonary TB. Lymph nodes are the draining stations of lymph in the body. Lymph from the lungs goes through the lymph nodes situated near the neck and above the collar bones. These lymph nodes are the most common nodes in the body affected by TB. When the tuberculosis bacteria reach these lymph nodes, the immune material inside the nodes launches an attack against the bacteria. This causes inflammation and swelling, which may not be warm or tender. This is called a cold abscess. Sometimes, the node may burst and may form a fistula, which is a communicating tract, to the skin. Sometimes, the node may be so big as to exert pressure on the surrounding structures and cause problems because of that. Some nodes near the windpipe may compress on it and cause breathing difficulty and stridor. Tuberculous lymph nodes may be excised and studied by pathologists to give a definitive diagnosis of the disease. 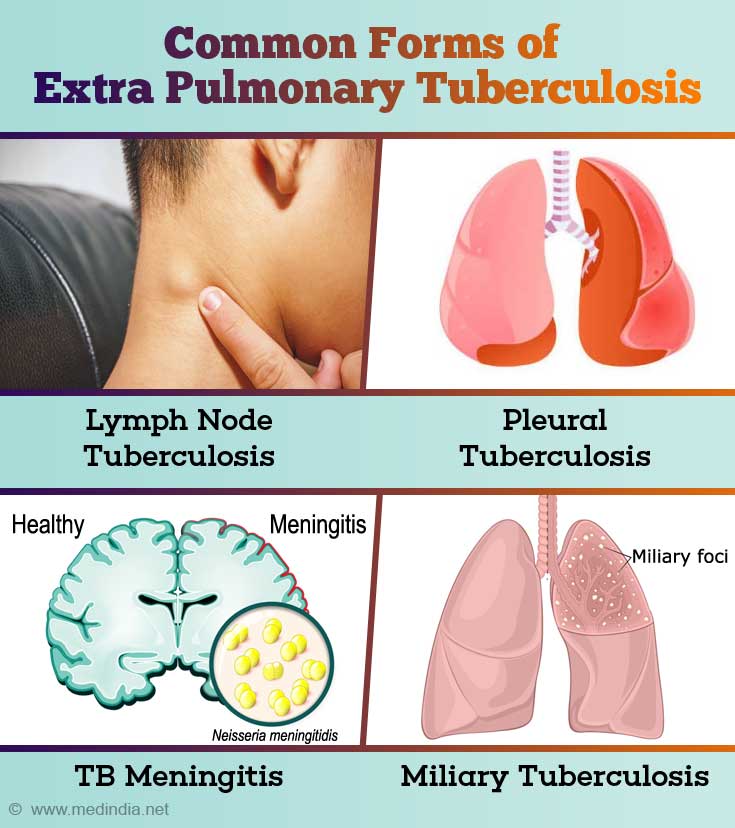 TB Meningitis and TB of the Nervous System

The brain and the spinal cord have three layers of tissue covering it, called the meninges. The three layers, from inside to outside are the pia mater, arachnoid mater and dura mater. These meninges perform several important functions, including shielding the precious neural tissue from injury, as well as secreting and absorbing a fluid called the Cerebro Spinal Fluid (CSF), which is present between the arachnoid and the pia mater. Inflammation of the meninges is called meningitis.

TB can cause blockage of the small arteries of the brain, leading to loss of blood supply to that part of the brain, causing stroke. TB bacteria can involve the meninges by spread from the lungs via blood. This often happens in patients who lack sufficient immunity. Involvement of the meninges or the brain itself may cause many symptoms and signs, including headache, nausea, vomiting, stiff neck, confusion, delirium, seizures etc. Analysis of the CSF by lumbar puncture is essential in diagnosing this situation

Tuberculosis of the Bone and Joints

TB bacteria can cause infection of bones and joints anywhere in the body, but usually have a predilection to involve the spine. Infection of the vertebral column (spine) by TB can cause collapse and fracture of the bones and/or abscess formation, which may lead to compression of the spinal cord, with drastic consequences. Infection of joints anywhere may cause swelling and pain of the joints. As with TB anywhere else in the body, the best method of diagnosis is to obtain a sample of the tissue and test for the presence of bacteria. But many other modes of investigations, such as X rays and CT scans may be needed.

Tuberculosis of the abdomen can result from direct seeding of the abdominal cavity or by blood spread from the lungs. Sometimes, the bacteria can enter the food pipe and can get to the intestines. TB bacteria can cause infection of any part of the abdomen and pelvis, including the intestines, liver, kidney, spleen, urinary system and the uterus and its associated structures. Each form of abdominal tuberculosis has its own specific set of symptoms and signs. Diagnosis of each of these requires different modalities. Some of the methods used are:

Miliary TB is a widely disseminated form of tuberculosis from a focus in the body that is rich in the TB bacteria. The dissemination occurs via both the blood and the lymph. Miliary TB derives its name from the many millet seed shaped nodules that occur in many parts of the body due to this condition.(4Extra pulmonary TB

Other Forms Of Extra Pulmonary Tuberculosis

TB can affect many other organs and parts of the body, including the skin, eyes, heart and its coverings, large and small arteries, the male genital system etc. Some of the conditions that can be caused by TB include: 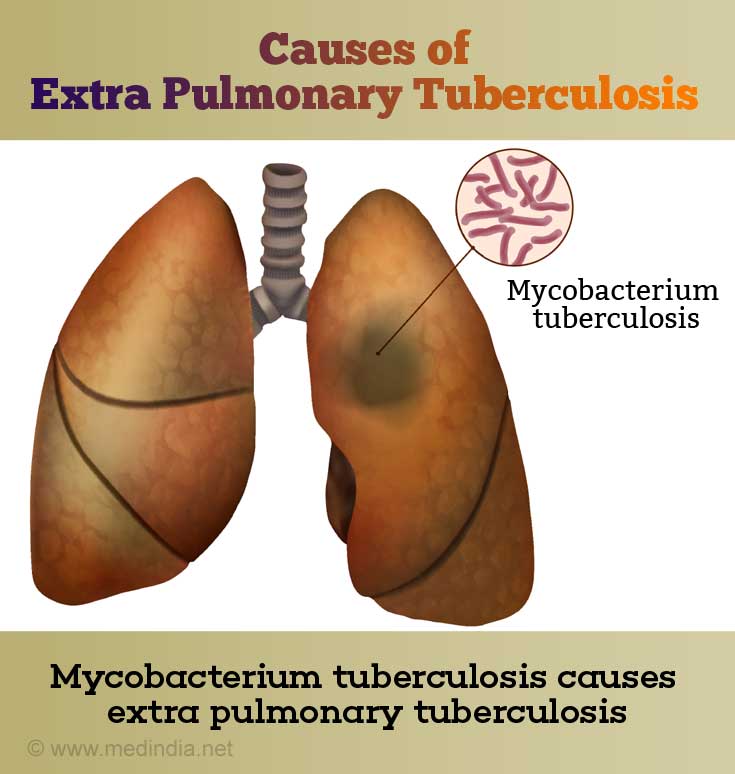 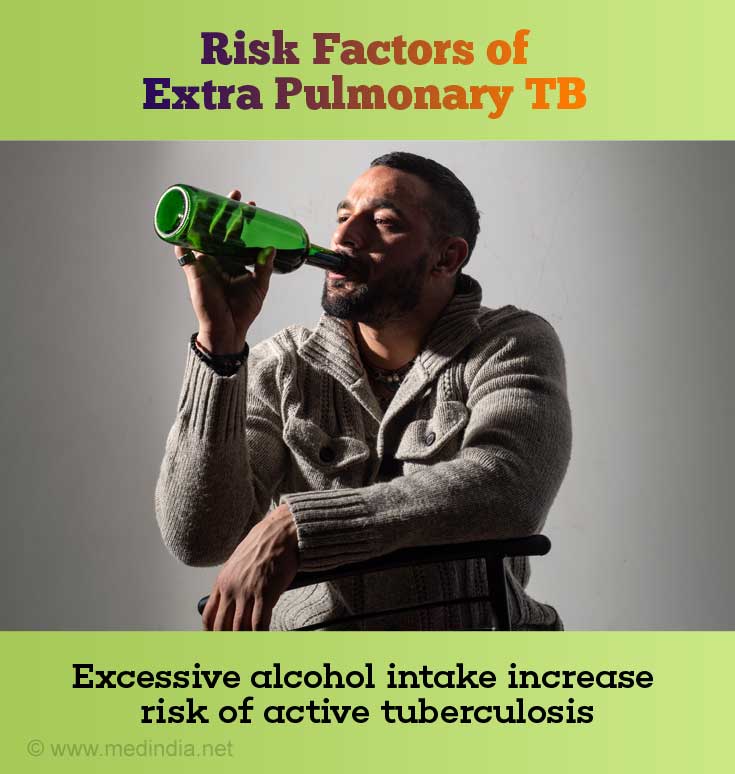 The cornerstone of successful management of any disease is correct diagnosis. The diagnosis of Tuberculosis is unfortunately difficult, even though new tests are available to aid the physician. The principles of diagnosis of TB are: 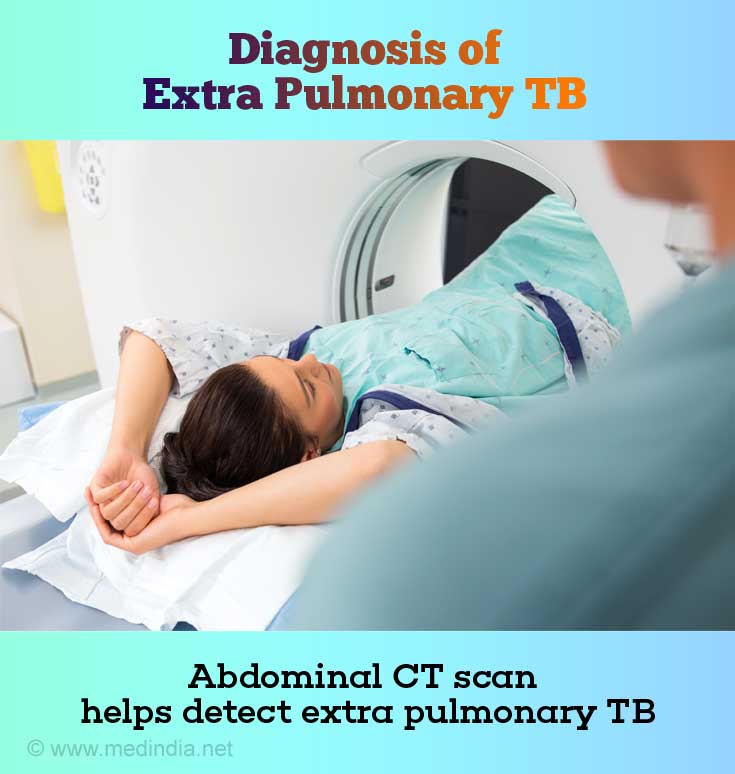 Patients with TB are broadly divided into two categories, and treatment is standardized for each particular category

There are also separate guidelines for management of Drug-resistant Tuberculosis.

Some special cases of TB, such as TB meningitis and TB pericarditis may need steroids to prevent further complications.

sir I have clubbing of fingure since last 4year and my both leg joint got swellen from last 10 month and after getting treatment i didnot get well. In my leg there is severe pain .sir please help if you can help

Quiz on Tuberculosis
Tuberculosis is a major health care concern, especially in Africa and South East Asia. Brush up your information on tuberculosis by taking this quiz. ...

Pulmonary Fibrosis
Do you find yourself out of breath and coughing a lot lately? Do you work in dust prone places? Well, then you might have pulmonary fibrosis.

Skin Tuberculosis
Skin tuberculosis is a rare form of tuberculosis that occurs outside the lung. Infection is exogenous through contact or internally from another infectious site.