What is Eustachian Tube Dysfunction?

The human ear is divided into three parts, the outer, middle and inner ear. The outer or external ear, includes the ear canal and parts of the ear that are visible to the eye; the middle ear comprises of the air filled space that is located just behind the ear drum along with three middle ear bones; and the inner ear includes the actual sensory organs of hearing and balance. The Eustachian tubes are connecting passageways that link the middle ear to the upper region and back of the throat. These tubes open to allow airflow in both directions whenever one yawns, sneezes or swallows. This flow of air is important as it acts as a pressure equalizer for the middle ear. These tubes also help in draining mucus from the middle ear lining.(1✔ ✔Trusted Source
Eustachian Tube Dysfunction

This equalizing effect of the Eustachian tube is important because it helps in maintaining equal air pressure, which is critical to the functioning of the eardrum. This role becomes all the more evident when there is a blockage of the tube as the air filled space of the middle ear gets isolated from the external environment resulting in the absorption of trapped air. This causes the eardrum to be pulled in and it affects the auditory senses and causes pain. When there is such a blockage of the tube it is referred to as Eustachian tube dysfunction.

Neglecting the condition or prolonged blockage of the Eustachian tube can cause further complications as fluid may accumulate in the middle ear space. This contributes to an increase in pressure in the middle ear and may result in loss of hearing which is termed as serous otitis media. There is also a risk of infection because of the presence of fluid in the region and such infections are called acute otitis media.(2✔ ✔Trusted Source
Physiology, Eustachian Tube Dysfunction

What are the Causes of Eustachian Tube Dysfunction?

There are various possible causes of Eustachian tube dysfunction such as: 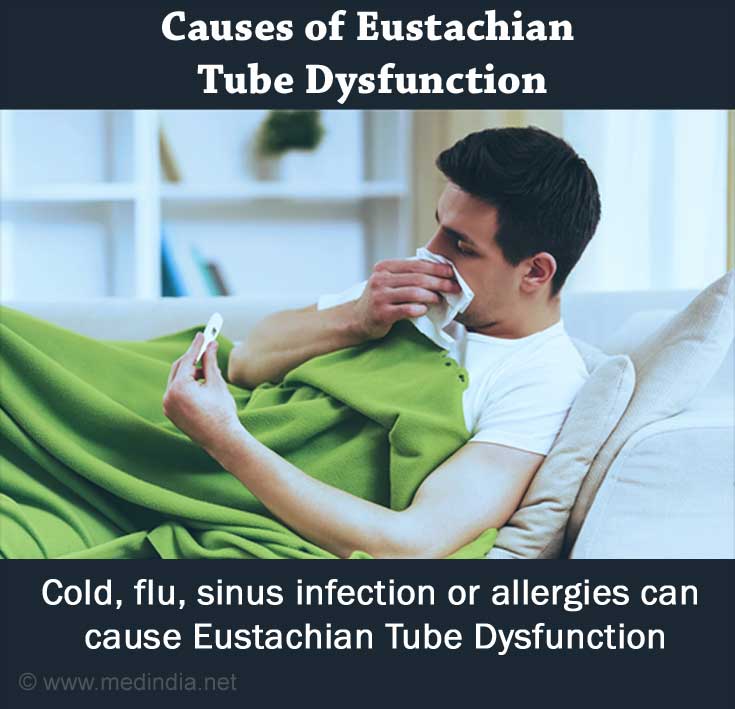 What are the Symptoms of Eustachian Tube Dysfunction?

If you do suffer from Eustachian tube dysfunction you will probably notice some of these symptoms: 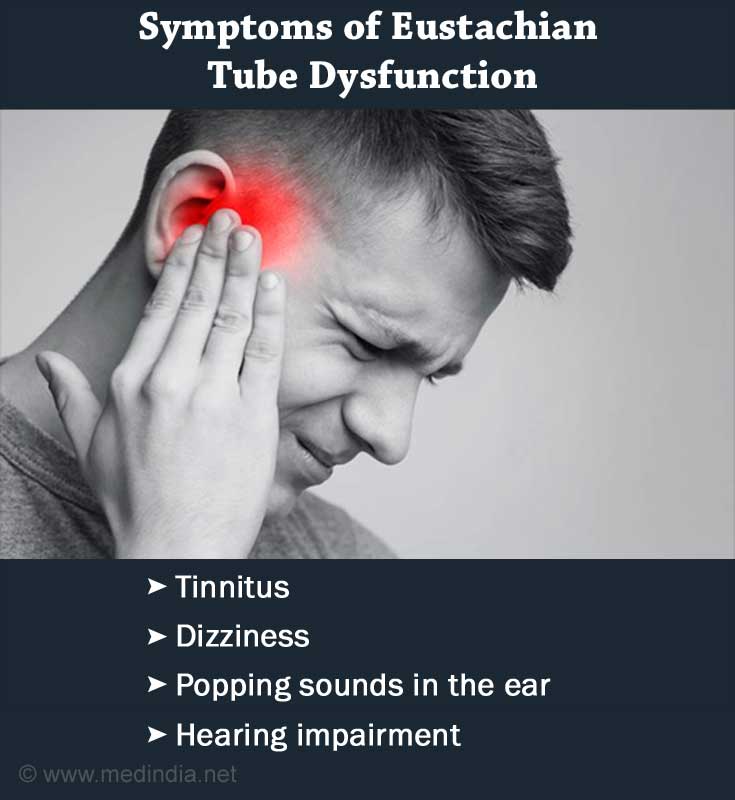 These symptoms may last for just a few hours or could even drag on for weeks. Usually, when the cause of the Eustachian tube dysfunction is resolved, the symptoms also dissipate. For example, if the problem is caused by a common cold you can expect the symptoms to resolve naturally within a week or so. Keep in mind that the symptoms may increase in severity if you travel by air because air pressure changes as the altitude changes. For the same reason, riding in an elevator, especially high-speed elevators could also aggravate the symptoms.(5What's to Know About Eustachian Tube Dysfunction?

How to Diagnose Eustachian Tube Dysfunction?

Very often your physician will be able to diagnose the condition simply based on the symptoms and a physical examination. During the physical examination your doctor will examine the ear canals and eardrums, as well as the nasal passages and the back of the throat because of its proximity to the Eustachian tubes and its role in such disorders. You will also need to inform your doctor about your medical history.

Audiogram  This is a test used to measure the responsiveness of your auditory senses. Graphs that are created from an audiogram reveal the softest sounds that are audible to each of the ears, at different pitches and frequencies.(6✔ ✔Trusted Source
Interventions for Adult Eustachian Tube Dysfunction: A Systematic Review. 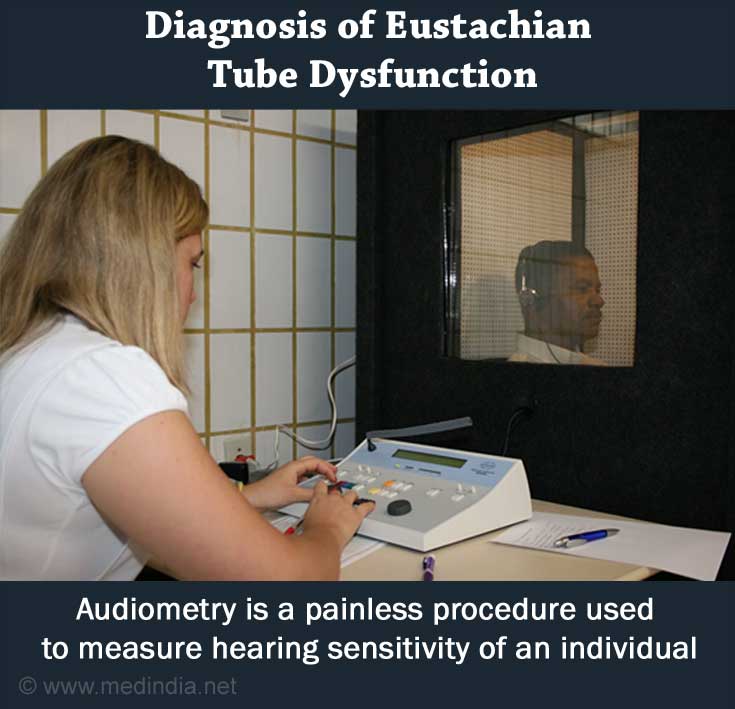 What are the Treatments for Eustachian Tube Dysfunction?

There are various treatment options for Eustachian tube dysfunction depending on the cause of the condition and its severity. In mild cases, treatment may not be required; as the problem will resolve once the cause goes away with or without treatment. If the condition lasts for more than a few days however, make it a point to seek medical attention. Here are some of the treatments that your doctor may recommend: 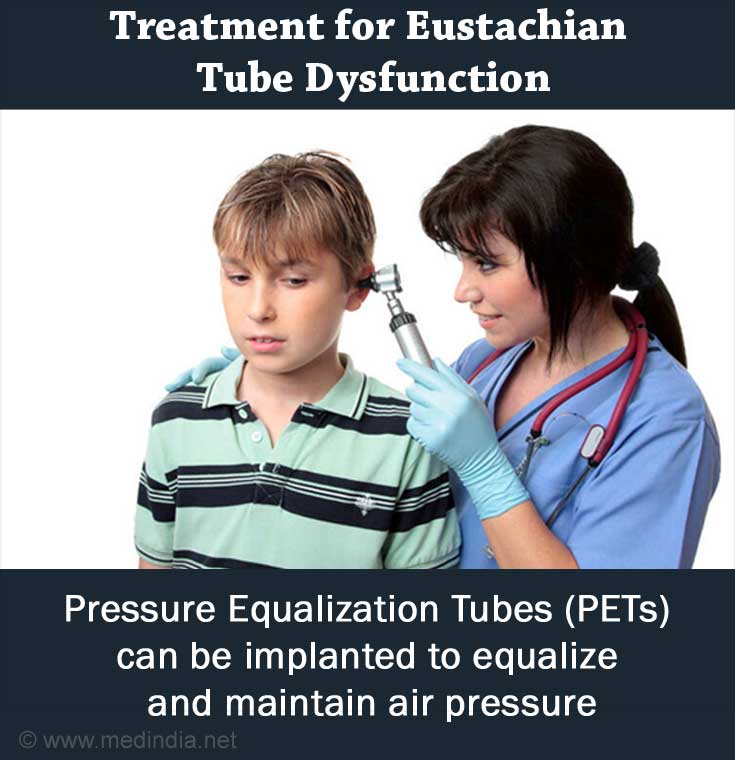 Acute Ear Infection
Ear infection is very common in babies and young children. The type of ear discharge depends on the underlying cause.

Cauliflower Ear
Find out what an auricular hematoma is and how cauliflower ear develops. Get info on cauliflower ear treatment and surgery and how it can be prevented.
Sign up for Wellness Consult a Doctor Sign up for Selfcare
Advertisement
Health Topics A - Z
A B C D E F G H I J K L M N O P Q R S T U V W X Y Z