The molecular basis of is a complex phenomenon and involves changes in the switching on and off of certain genes. Even the proteins associated with the DNA may be switched on or may be silenced.

The phenomena of epigenetics explain why only relevant genes are selectively expressed in differentiated cells of a multi-cellular organism while the others remain silent.

Most epigenetic changes occur during cell division (mitosis) and manifest only during an individuals life time. If, however, a mutation occurs in the DNA, some of these epigenetic changes might be inherited by the subsequent generations.

A wide range of molecular biologic techniques are employed to further understand the epigenetic phenomena. They include-

Gene regulation controlled by epigenetics can be implemented at different levels. There are several epigenetic mechanisms of gene regulation, the predominant ones being DNA methylation and histone modification.

DNA wraps itself around the sphere-shaped histone proteins to form chromatin. Remodelling of this chromatin is one of the steps involved in regulating gene expression.

One method of bringing about this is by changing the manner in which the DNA wraps itself around the histones. However,Chromatin remodeling is mainly mainly through two methods: 

a. Histone modification-Modifying the amino acids that make up the histone proteins will bring about a change in their shape. This ensures that the DNA does not completely unwind during vital functions such as transcription and that only few genes are transcribed. These modifications are more in the unstructured N-termini of the DNA known as the histone tails.

b. DNA methylation - The second method is by the addition of methyl groups to the DNA, to convert the base cytosine to 5-Methylcytosine. High methylated regions of the DNA are known to be transcriptionally less active, although the reason is not throughly understood.

Methylation of cytosine can be inherited specifically from a parent.This mechanism, known as genetic imprinting, acts as a method for tracing the origin of a chromosome.

DNA methylation is the main epigenetic process that controls allelic imprinting - a phenomenon by which only one allele (or form) of a certain gene is expressed depending on which parent it originated from. The gene retains a memory regarding its origin and DNA methylation is part of this 'memory' process. Loss of this selective expression or imprinting (LOI) has been strongly linked to cancer susceptibility

Scientists have identified about eighty genes in humans that can be imprinted. However, the credibility of this number is debated due to the disparity among the evidences available.

Most of these genetically imprintable genes tend to promote fetal growth if the allele expressed came from the father and acts in the opposite manner if the expressed allele belonged to the mother.

Certain enzymes such as the DNA methyl transferases have a higher affinity for methylated cytosine. If these enzymes come across one just one half of a DNA strand that is methylated ("hemimethylated DNA) it ensures that the other half is methylated as well.

There are a series of factors that influence DNA methylation. They include diet, aging and the environment.

In fact, the method by which DNA is packaged is really what dictates phenotypic changes, such as the onset of a disease.

A wide range of small RNAs have been discovered that could possibly be playing a part in epigenetic gene regulation and expression. Sometimes the RNAs produced by the genes may control the expression of other genes thereby playing a role in epigenetic inheritance.

It must be remembered that RNAs and proteins are contributed by the mother to the embryo and this results in the maternal effect phenotypes.

Protiens generally fold into several specific units inorder to function. Some proteins, on the other hand, form an infectious conformational state -- the prion. These infectious units are capable of converting other normal proteins into prions and that is where their epigenetic influence comes into play. 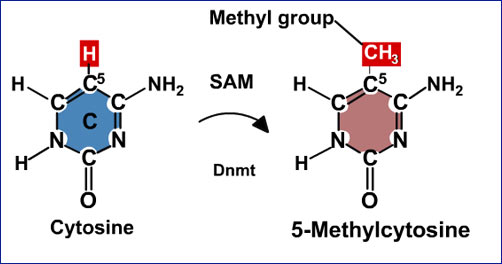 << About
Epigenetics and Cancer >>

Eye Colour and Personality Can our eyes indicate our personality? If your teenage son does not look you in the eye while answering a question, he is probably not being entirely honest.The color of ones' eyes reflects individuality

Obesity- Battling the Bulge Obesity is a condition in which a person weighs more than he really should. It is a global phenomenon with many in the developing countries too 'battling with the bulge'.