Effects of Consuming Alcohol while Breastfeeding

The question of safety of alcohol while breastfeeding has been the subject of debate since long. Although there is enough evidence to suggest the ill effects of drinking alcohol during pregnancy, the same is not available for the period of lactation.

There even exists a belief among mothers of certain communities that alcohol helps a breastfeeding mother relax and produce more milk (galactagogue). Research suggests otherwise. Studies have pointed out that alcohol may, in fact, reduce the production of breast milk and the alcohol in breast milk may pass on to the infant and cause short and long term effects in the breastfed baby.

Breast milk is produced by the glandular tissue present in the breasts of a lactating mother. It has a complex composition and contains nutrients necessary for the growth of a baby. Prolactin, a hormone produced by the pituitary, is responsible for the initiation and maintenance of lactation. The more the baby suckles, the more prolactin is produced and more is the production of breast milk. Another hormone, oxytocin, is responsible for the let-down of milk during breastfeeding

When a nursing mother drinks alcohol, a small quantity of it passes into the breast milk as well and the quantity varies in proportion to the amount present in the mothers blood. It peaks around half an hour to one hour after drinking alcohol and then slowly decreases. The more the quantity of alcohol is taken, the longer it takes to be eliminated.

Effects of Alcohol on Breastfed Baby

Although a very small quantity of the alcohol consumed passes into the breast milk (5-6% of the maternal dose), it still has a certain influence on the process of breastfeeding and affects the infant, both short-term and long-term.

A study conducted in Philadelphia by researchers Mennella and Beauchamp aimed to study the effect of alcohol on breast milk and infant behavior. Twelve lactating mothers and their breastfed babies were taken as subjects and studied on two days a week apart. On both the days, the mothers first expressed a little milk and then consumed juice containing ethanol (0.3 g/kg body weight).

Milk samples were obtained after a certain period of time to determine the change in odor. The babies were observed through video cameras to notice behavior changes and they were weighed both before and after breastfeeding in order to determine the amount of milk consumed.

It was observed that there occurred an alteration in the odor of the milk after consuming alcohol and the intensity varied in proportion to the amount of alcohol consumed. The infants suckled 20% lesser in the 4-hour period after their mothers had consumed alcohol. Alcohol is known to inhibit the production of oxytocin and that might be the reason for the reduced yield. The study demonstrated that consumption of alcohol by a lactating mother results in a change in the odor of breast milk and the feeding behavior of the infant.

Another study by Mennella in collaboration with Gerrish studied the effect of consumption of alcohol by a lactating mother on the sleep pattern of her breastfed baby. After studying thirteen lactating mothers and their babies, it was seen that infants slept lesser in the 3.5-hour period of feeding if their mothers had consumed alcohol.

A study conducted by Little et al. on the development of an infant at 1 year of age and consumption of alcohol by the mother while lactating, demonstrated that motor development in such babies was delayed. Even after the addition of control for various alcohol-related changes in maternal behavior were introduced, the effects remained the same. This has been attributed to the fact that infants do not have the capacity to fully metabolize alcohol as the level of activity of alcohol dehydrogenase in infants is one-fourth that of adults. The alcohol consumed through breast milk, therefore, tends to accumulate in their bodies.

Consumption of alcohol by a lactating mother may even influence learning in an infant. A study conducted by Mennella and Beauchamp studied the response of babies to differently scented toys. Breastfed babies of mothers who consumed alcohol behaved differently in the presence of an alcohol-scented toy than other breastfed babies.

Despite the findings of the aforementioned studies, it is very difficult to conclusively comment on the effect of alcohol consumed by lactating mothers as there is little original research available. The amount of alcohol that passes into the breast milk is 5-6% of the maternal dose and to determine whether the amount is sufficient to cause any significant effects in the infant, further research needs to be conducted. Long-term effects of alcohol abuse in a lactating mother may also be influenced by other accompanying social and behavioral changes in the mother leading to poor care and neglect of the child rather than direct effects of alcohol.

Thus, recommendations remain precautionary. Lactating mothers are advised to refrain from drinking alcohol in large quantities and avoid breastfeeding for 3-4 hours after alcohol intake. A Motherisk normogram has been suggested to be used as a parameter to determine the time taken for elimination of alcohol according to the quantity consumed and the height and weight of the mother. It assumes a maximum rate of elimination as 15mg/dL/h and the alcohol content of a standard alcoholic drink to be 17g. Accordingly, it estimates that after consumption of a standard drink, it shall take around 110-170 minutes for the alcohol to be eliminated from the body and the mother can breastfeed the baby. The normogram is not supported by any scientific evidence.

Pumping breastmilk before consuming alcohol is another suggestion that may be followed to avoid an exposure of the breastfed baby to alcohol.

Latest Publications and Research on Effects of Consuming Alcohol while Breastfeeding

Alcohol During Pregnancy Poses Risk for Fetal Alcohol Syndrome
Fetal alcohol syndrome can certainly be a devastating condition, leaving the child with a host of physical, developmental and intellectual disabilities.
READ MORE 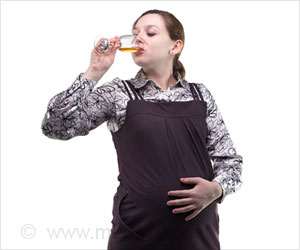 Fetal Alcohol Syndrome (FAS)
Fetal alcohol syndrome (FAS) is a group of physical and mental defects that occur in the fetus due to alcohol consumption by the mother during pregnancy.
READ MORE
Sign up for Wellness Consult a Doctor Sign up for Selfcare