Ebola is caused by a virus via direct contact with body fluids or infected blood.

Ebola virus disease, also known as Ebola hemorrhagic fever, is a disease caused by a virus that gets its name from Ebola River, which flows near one of the villages in the Democratic Republic of Congo, the place where the disease first appeared. 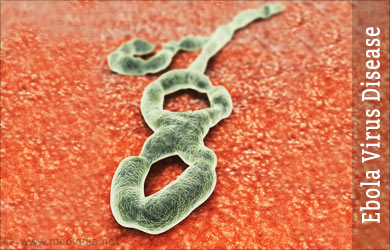 Scientists have identified five types of Ebola virus, of which one is believed to be non-pathogenic to humans. The first outbreak of Ebola virus was seen in 1976, Zaire with 318 cases of the hemorrhagic disease, of which 280 died quickly. So far, this deadly disease has been found in parts of Africa and is known to infect monkeys and human beings.

The virus is known to be transmitted via contact with body fluids or blood from an infected person or through infected needles. However, due to the high mortality and quick death, the spread of the disease is limited. Laboratory personel who test the samples from patients are also at a high risk of infection.

Bats in the African forests have known to be reservoirs of the Ebola virus, although they remain asymptomatic. The infected bats may drop partially eaten fruits and pulp, which are picked up by terrestrial mammals such as gorillas, who in turn catch the virus. Fruit bats are also eaten by people in parts of West Africa, followed by the virus then spreading from person to person, within families, hospitals, communities and even during mortuary rituals. 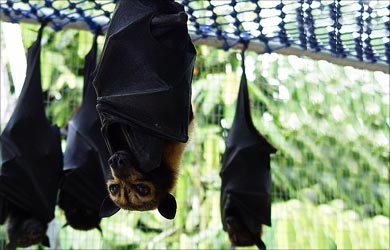 Once a person catches the virus, its incubation period is 4 to 16 days. The virus spreads through blood and damages blood vessels in vital organs. This eventually causes severe damage to the liver, kidneys, ovaries and testis, lymphatic system and other organs. The bleeding results from damage done to the platelets, linings of arteries, mucosal surfaces of the stomach, heart membrane and vagina.

Diagnosis is based on isolation of the virus and other blood tests. Treatment is symptomatic. It is necessary to take adequate preventive measures since the disease has a high fatality rate. 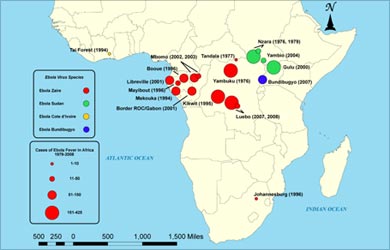 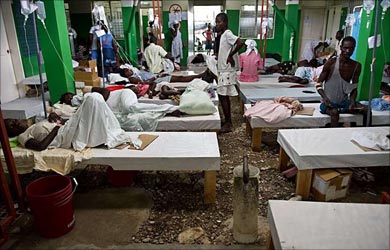 African Children Vulnerable To Sickle-Cell Disease African children are perilously vulnerable to the sickle-cell disease, a blood disorder that increases the risk of infectious diseases and early death.

Ebola Claims the Lives of Five in Liberia As neighboring Guinea battled an outbreak of virus which killed dozens, five patients in Liberia have died of suspected Ebola fever, the government said Monday.

Amoebic Dysentery Amoebic dysentery or amoebiasis is an infection of the intestine that causes diarrhoea most frequently along with other causes.

Congo Fever Crimean-Congo Hemorrhagic fever (CCHF) is a viral disease that affects people who are bitten by infected ticks or those in direct contact with blood or tissues of infected animals or patients.

Worst Outbreak of Deadly Virus Leaves Guinea's Ebola Victims Waiting for Death Victims of Ebola, one of the deadliest viruses known to mankind wait listlessly for the merciful release of death, isolated from the outside world in a medical center in Ebola-hit Guinea.

Deadly Ebola Epidemic Now a 'Regional Threat' The widespread Ebola epidemic which killed dozens in the southern forests has now spread to the port city has now put Conakry on high alert Friday.

Morocco Gets Alert After Ebola Outbreak in Guinea Extra health screening measures announced by Morocco on Tuesday at entry points to the country, especially at Casablanca airport, after the outbreak of the deadly Ebola epidemic in Guinea.