Cancers of the Ear / Ear Cancers

What are Ear Cancers?

The human ear is made up of three parts  the outer ear, the middle ear, and the inner ear. The outer and the middle ear are separated by the tympanic membrane or the eardrum.

The middle ear contains the three small bones of the ear, the malleus, incus, and the stapes. The inner ear contains the hearing organ called the cochlea as well as the organ involved in balance, which is called the vestibule. The outer ear is lined by skin. The skin of the ear canal is lined by glands that secrete wax. The ear is located in the temporal bone, which comprise the bones on the sides of the skull.

Cancers that affect the ear are extremely rare. Skin cancers are the commonest form of cancers affecting the outer ear. Cancer can also arise from the glands lining the ear. Other rare forms of cancer include those that arise from the cartilage, the soft tissue, and the bone.

Cancers of the ear include:

The exact cause of ear cancer is not known. Chronic ear infections increase the chances of ear cancer. Skin cancers like basal cell cancer are common in skin that is exposed to ultraviolet rays and in white skin. Squamous cell cancers often arise due to chronic irritation.

Ear cancers may not only deform the ear, but they may also affect hearing. Early treatment with surgery and/or radiotherapy can often control the cancer. Regular follow-up is advised following initial treatment to rule out recurrence of the cancer.

Signs and Symptoms of Ear Cancers

The signs and symptoms of some of the more common forms of ear cancer are listed below:

Basal cell cancers are commonly found on the face and can affect the ear. They present as an ulcer with raised and beaded edges. The ulcer does not heal over a prolonged period of time. The base may feel hard and the ulcer may bleed when touched. A scab may be present. In some cases, the cancer can appear as a hard nodule. Aggressive basal cancers may deform the entire external ear. Unlike several other cancers, basal cell cancers usually do not spread to distant sites. They spread locally and destroy tissues.

Squamous cell cancers appear as cauliflower-like growths or as ulcers, or with features of both. The base is hard and the edges are everted. The ulcer bleeds easily when touched. The ulcer may be attached to the underlying tissue. Squamous cell cancers of the ear spread locally to lymph nodes and sometimes through blood. They may also spread to the underlying temporal bone. 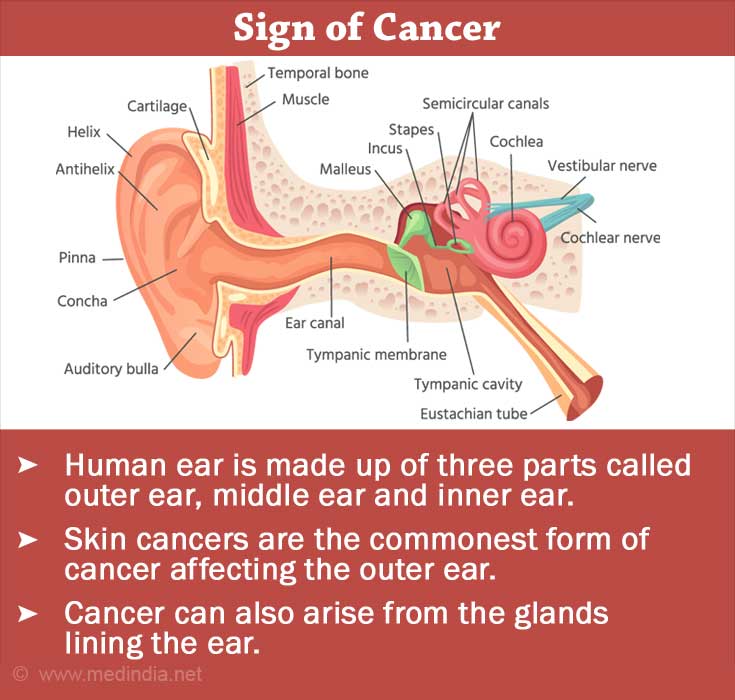 Adenoid cystic carcinomas are rare, slow growing cancers of the external auditory canal. They arise from the ceruminous glands that secrete wax, sweat glands, or the salivary gland tissue that may be inappropriately positioned in the ear. Symptoms include a sharp pain that radiates from the ear, hearing loss, tinnitus, and facial weakness. The cancer may appear as a swelling, polyp, or an ulcer. There may be discharge from the ear with pus and sometimes blood. The cancer may spread locally to the bone, the soft tissues, and the salivary glands, or may spread to the lymph nodes and even distant sites like the lung and the liver.

Ceruminous adenocarcinoma is another tumor involving the earwax-secreting glands that usually spreads locally. Other cancers affecting soft tissues, cartilage, and bone, show symptoms similar to those when they affect other areas of the body.

The diagnosis of ear cancer is made based on: 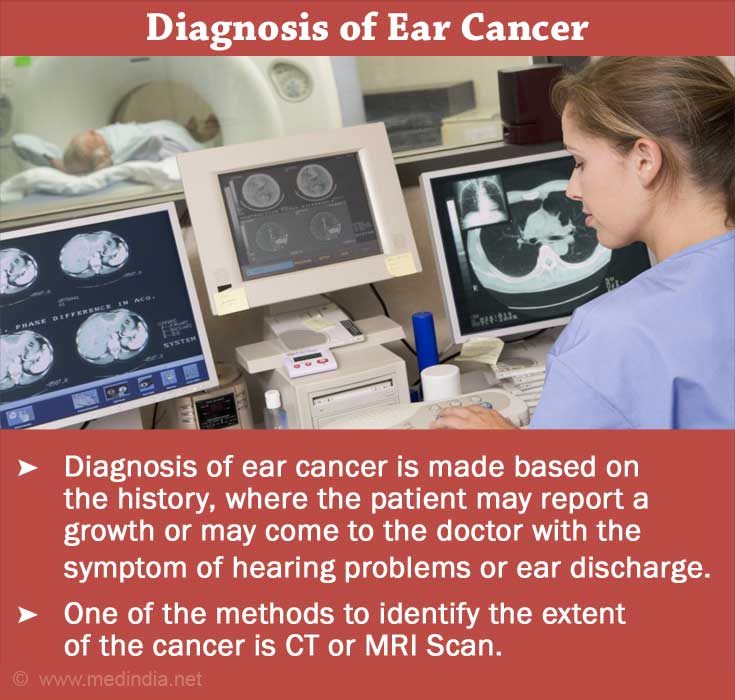 The treatment of ear cancer depends on the type of cancer, the stage of the cancer as it indicates the spread of the disease, and the exact location of the cancer in the ear.

Basal cell cancers are mainly treated with surgery and radiation. Surgery is preferred for cases affecting the ear. Plastic surgery may be required to surgically reconstruct the ear.

Squamous cell cancers are also treated with surgery or sometimes with radiation. It is necessary to treat any spread of the cancer as well.

Malignant melanomas, adenoid cystic carcinomas, and most other ear cancers are treated surgically.

Though ear cancers cannot always be prevented, here are some suggested ways that could reduce your chances of developing ear cancer:

Latest Publications and Research on Cancers of the Ear / Ear Cancers

Basal Cell Cancer of the Skin Basal cell cancer is a locally invading cancer. It often occurs on the face above a line joining the angle of the mouth and the ear lobe.

Quiz on Skin Cancer The skin is the largest organ of the body, comprising of two main layers - the epidermis and the dermis. This quiz on skin cancer will help you brush up your knowledge on this topic. ...
Sign up for Wellness Consult a Doctor Sign up for Selfcare
Advertisement
Health Topics A - Z
A B C D E F G H I J K L M N O P Q R S T U V W X Y Z