Hyponatremia is a condition where plasma sodium level falls to less than 135 mmol/L.

The body maintains a careful balance of electrolytes like sodium, potassium and chloride within the cells as well as in fluid outside the cells like blood and body fluids. Sodium is necessary to carry out some important functions like maintaining blood pressure. It also helps to maintain the function of nerves and muscles. Sodium enters the body through food and fluid intake. The common salt or table salt contains sodium chloride and it is used not only for cooking but also in preservatives. The same sodium chloride also is the reason for the salinity of our oceans. Excess sodium is excreted by the kidneys via the urine. Sodium levels in the plasma are normally maintained at a level of between 135 to 145 mmol/L.(1✔ ✔Trusted Source
Hyponatremia: A Practical Approach

The condition in which plasma level of sodium falls to below 135 mmol/L is called hyponatremia. Hyponatremia causes movement of excess water in the cells, causing them to swell. The cells of the brain in particular are unable to cope up with this swelling since they are confined within the bones of the skull. Thus, many of the symptoms caused by hyponatremia, especially severe cases, are related to the brain.(2✔ ✔Trusted Source
Effects of Hyponatremia on the Brain

When taking medication we must remember that some of the drugs cause hyponatremia as a side effect. Many among these bring about this effect by resulting in a condition called SIADH or Syndrome of Inappropriate Secretion of ADH. ADH (antidiuretic hormone) or vasopressin is a hormone secreted by a small gland near the brain called the pituitary. It plays an important role in water absorption from the kidneys and stimulates thirst. Thus, in conditions of dehydration, by increasing water absorption from the urine and stimulating thirst, it helps to maintain the water content of the body.

SIADH is a condition where the control of ADH secretion is lost and it is secreted independent of the need to conserve water. This results in water retention and subsequent dilution of sodium levels, leading to hyponatremia.

Nausea, vomiting, headache, and muscle cramps, or Symptoms may be serious like alteration in mental status including confusion, seizures and coma. 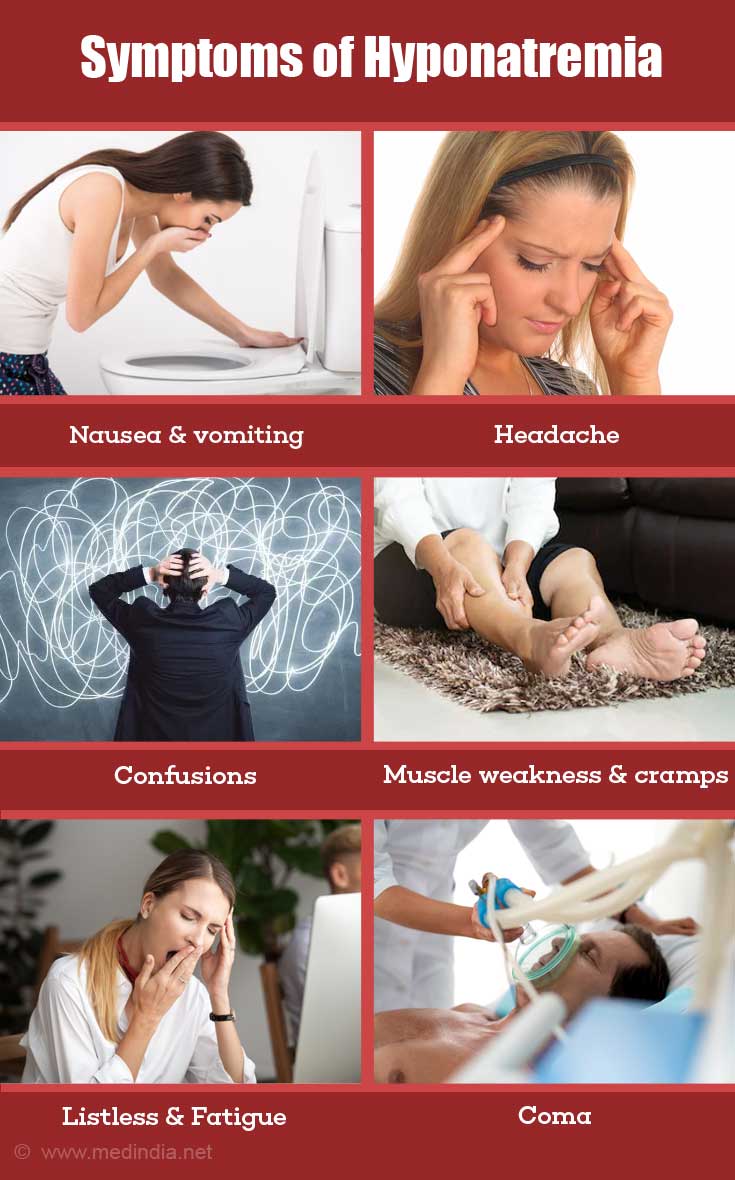 If hyponatremia is diagnosed, a careful history should be taken from the patients or their caregivers to find out if the patients are taking any medications that could result in hyponatremia. Stopping the medication usually helps to solve the problem.(3✔ ✔Trusted Source
Hyponatremia

Lowering of Sodium Level or Hyponatremia >>

How do you know your sodium levels are too low or too high? Are the symptoms different?

Diet High or Low in Sodium Injurious to Heart Eating too much or too little salt increases the risk of cardiovascular death among people who have heart disease or diabetes.

Quiz on Dietary Minerals for Healthy Body "Health is a relationship between you and your body" - Terri Guillemets Dietary minerals are inorganic substances that are obtained by the body through food that we eat. Take this quiz and find out about the minerals that ...

Hyponatremia Hyponatremia is an electrolyte imbalance causing low blood sodium levels. It is a dangerous condition that causes fluid retention in the brain leading to coma or even death. The causes, symptoms and treatment of hyponatremia are described below.