Drugs Banned in other Countries But Available in India

Drugs Banned in other Countries but Available in India

Several drugs that are prohibited or withdrawn from other countries like the United States are still widely available in India. Some of these include the following: 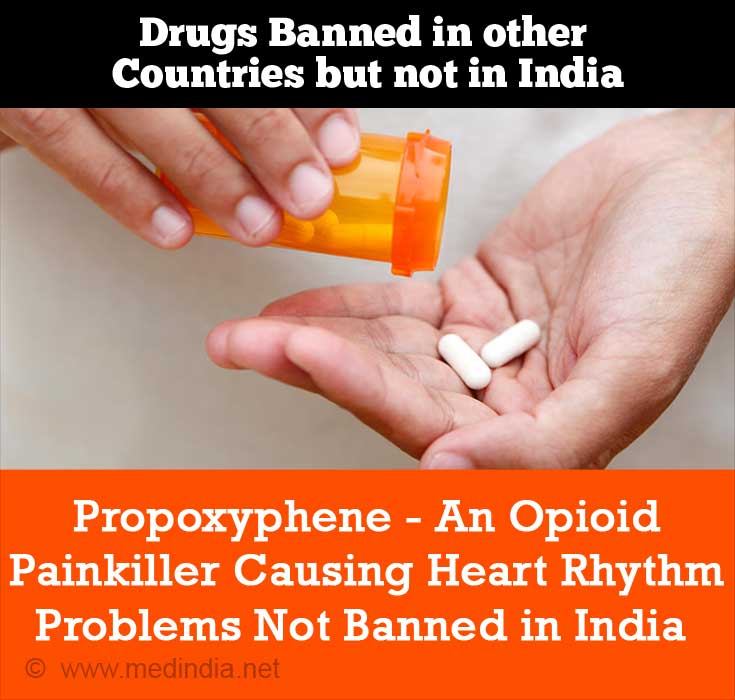 Nandrolone decanoate is a drug that is used in the treatment of anemia due to kidney disease and osteoporosis. The drug is commonly abused by athletes to build muscle mass. It has been discontinued in the United States but is still used in India.

Cerivastatin is a cholesterol-lowering drug that caused several cases of rhabdomyolysis (destruction of skeletal muscles). With this side effect, patients suffered from damage to muscles followed by kidney failure. Unfortunately, it is still available in India.

Phenolphthalein belongs to a group of drugs called stimulant purgative, which are useful in the treatment of constipation. Studies in mice have indicated that its use may be associated with cancer or genetic damage, due to which it is not available in several countries. Though available in India, it is not frequently used. 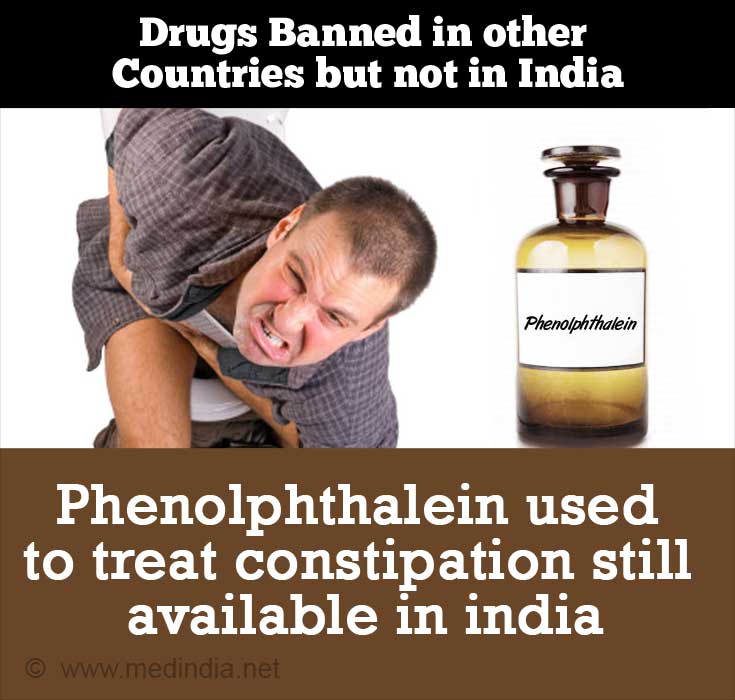 The human placental extract is derived from the placenta obtained during delivery of a baby and finds use in the cosmetic industry. As other tissues of human origin, it may transmit infections like hepatitis B and HIV if adequate precautions are not taken, and is therefore not used in several countries. It is only allowed for two conditions in India - to be used locally for wound healing, and to be injected for pelvic inflammatory disease.

I support the article as it is one of the few articles to guide the 'state-misguided' citizens of this administratively neglected country. Yet I find it dificult to find out the names of the brands which contained Fenfluramine [Pondimin] and Dexfenfluramine (Redux). I feel that citizens in India are not only suffering of apathy by the State but sometimes the silence of the State, which is many a cases has been spelled differently as 'corruption'. Poor citizens are suffering because the governments wont take action on the murderous companies and our representatives being hand (dirty, bloody) in glove (of the corporates). Time and again Indian citizens are tested like guinea pigs, most suffer to the last with their families in a state without healthcare insurance. Yet shameless heads claim to have made our country a super power e.g.; IT power: I fail to understand how can a country can be powerful in IT when it neither has a Operating System of its own and when it has yet to manufacture a hardware chip for a 'scientific calculator'? I again request, if anybody knows to help me by disclosing the brands which contained which Fenfluramine and Dexfenfluramine. Many are sufferring heart fibrosis, PPH, ...it is for them to know, what exactly happened to them?

Human aqueous Placental extract is a very effective drug. It contains several bioactive therapeutic molecules. We [the team of Indian Institute of Chemical Biology, an unit of CSIR India] are working for last 12 years with the extract the trade name is âPlacentrexâ and identified different molecules with the potent therapeutic efficacy e.g. fibronectin type III like peptide, Bioactive NADPH, PDRNs , some other peptides with protease regulatory property etc. Banning this drug is a loss of a huge number of populations suffering from chronic, non-healing /diabetic wounds, burn injuries, surgical trauma etc. These research findings have been published in highly reputed international (Us and UK based) as well as national journals (ref Pubmed). Itâs an Indian drug with a very good reputation in abroad like France, Switzerland, Korea etc. We have been invited several times in abroad (Europe, especially in France) to deliver lectures on âPlacentrexâ research findings. We are still working with the drug. So far we have not found any adverse effect of the drug. Several clinical studies have also been done on it and these are also published in different peer-reviewed medical journals. Without knowing the rationality, efficacy and safety âBanning this highly reputed product of Indiaâ is very much unethical. Banning of such a globally accepted drug must be reconsidered.

My strongest support is with the above comments. Research findings on indigenous human placental extract which is available at pubmed[www.pubmed.com]is very rational, based on extremely scientific foundation. Efficacy of the drug is unquestionable and it has been accepted by the global scientific community through several high rated international and National scientific journals. Banning of such a successful Indian formulation is a shame for the country itself. Through the research on this placental extract our country has been glorified several times. Without knowing the actual fact, banning the drug is a shameful as per my opinion.

My gynaecologist has suggested me take 10 pakcentrex injection in a period of 20 days to open my blocked right fallopian tube. Please advise if I can go for this treatment as I got to know that placentrex is a banned drug. Please help.

can you please give the references for this artcle

if it is a product derived from human tissues, can it transmit infectious diseases such as HIV ? I also have not seen any publications regarding its efficacy.

Find Pharmaceutical  Medindia provides you a extensive list of indian pharmaceuticals, which is the largest database that is available online

Drug Price list Find out the price of drugs. Compare prices of different brand names as the same generic drug can cost more or less depending on the company manufacturing them. Also find out their full prescription information.

Drug Toxicity All drugs are likely to have some side effects. Therapeutic monitoring of drugs is now readily available to make some of the drugs even safer.

Drug Toxicity Drug toxicity is an adverse reaction of the body towards a drug that results as a side effect of a drug, reaction to a drug or drug abuse.