Drugs undergo rigorous testing before they are introduced into the market. They are first tested in animals and then in human beings during clinical trials for their efficacy as well as safety. Despite all precautions, some adverse effects of drugs appear only when the drug is used in the general population after its approval. These adverse effects are detected though a process of regular monitoring after the drug is released into the market called pharmacovigilance(1✔ ✔Trusted Source
Regulatory Control on Banned Drug: A Review Article

If the adverse effects are severe or the risks of using the drug outweigh the benefits, or if the drug is ineffective, the country may ban the drug or the drug company may itself voluntarily withdraw the drug. Some drugs may cause adverse effects only when combined with particular drugs. In such cases, only the fixed dose combination is banned and not the individual drugs. 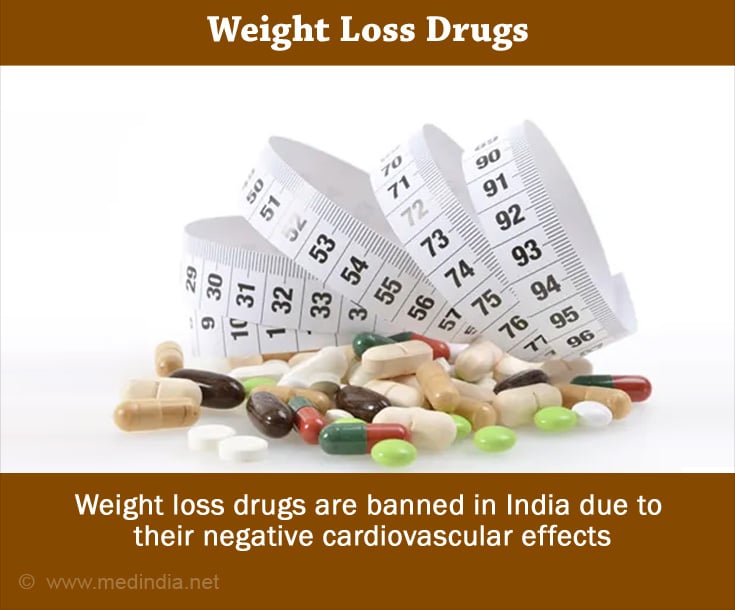 A number of single drugs as well as fixed dose combinations have been banned for manufacturing, marketing and distribution in India. Some individual drugs banned in India are mentioned below:

The introduction of weight loss drugs in the Indian market provided hope to numerous people suffering from overweight and obesity. These drugs could not only help people with a better body image, but they also promised reduction of health consequences of obesity. Unfortunately, these drugs were associated with serious side effects and had to be withdrawn for the following reasons:

Rofecoxib and valdecoxib were second generation non-steroidal painkillers. They claimed to provide pain relief without causing stomach ulcers unlike conventional painkillers like aspirin, ibuprofen and indomethacin. However, their use was eclipsed with a higher incidence of heart attack and stroke in patients taking the drugs and therefore, they were banned.

Patients taking valdecoxib were also at a higher risk for serious skin reactions. These adverse effects did not support the use of these drugs for pain relief when safer drugs are available.

Astemizole and terfenadine belong to a class of medications called antihistamines and were used to prevent and treat allergies. They have been withdrawn because they were linked to a problem with the heart rhythm called torsades de pointes, especially when used along with certain other drugs like erythromycin and ketoconazole.

Phenformin, an anti-diabetes drug related to metformin, was banned because it caused lactic acidosis, where it increased the pH of the blood. In more recent times, rosiglitazone has been withdrawn because of its associated risk of heart attack.

Gatifloxacin, an antibiotic belonging to the class fluoroquinolone, has been banned due to its ability to cause high blood sugar levels when taken either orally or through injection. However, eye drops containing gatifloxacin are still available.(4✔ ✔Trusted Source
Gatifloxacin Ophthalmic Solution for Treatment of Bacterial Conjunctivitis: Safety, Efficacy and Patient Perspective

Latest Publications and Research on Drugs Banned in India

Banned Fixed Dose Drug Combinations in India as of March 201... >>

I support the article as it is one of the few articles to guide the 'state-misguided' citizens of this administratively neglected country. Yet I find it dificult to find out the names of the brands which contained Fenfluramine [Pondimin] and Dexfenfluramine (Redux). I feel that citizens in India are not only suffering of apathy by the State but sometimes the silence of the State, which is many a cases has been spelled differently as 'corruption'. Poor citizens are suffering because the governments wont take action on the murderous companies and our representatives being hand (dirty, bloody) in glove (of the corporates). Time and again Indian citizens are tested like guinea pigs, most suffer to the last with their families in a state without healthcare insurance. Yet shameless heads claim to have made our country a super power e.g.; IT power: I fail to understand how can a country can be powerful in IT when it neither has a Operating System of its own and when it has yet to manufacture a hardware chip for a 'scientific calculator'? I again request, if anybody knows to help me by disclosing the brands which contained which Fenfluramine and Dexfenfluramine. Many are sufferring heart fibrosis, PPH, ...it is for them to know, what exactly happened to them?

Human aqueous Placental extract is a very effective drug. It contains several bioactive therapeutic molecules. We [the team of Indian Institute of Chemical Biology, an unit of CSIR India] are working for last 12 years with the extract the trade name is âPlacentrexâ and identified different molecules with the potent therapeutic efficacy e.g. fibronectin type III like peptide, Bioactive NADPH, PDRNs , some other peptides with protease regulatory property etc. Banning this drug is a loss of a huge number of populations suffering from chronic, non-healing /diabetic wounds, burn injuries, surgical trauma etc. These research findings have been published in highly reputed international (Us and UK based) as well as national journals (ref Pubmed). Itâs an Indian drug with a very good reputation in abroad like France, Switzerland, Korea etc. We have been invited several times in abroad (Europe, especially in France) to deliver lectures on âPlacentrexâ research findings. We are still working with the drug. So far we have not found any adverse effect of the drug. Several clinical studies have also been done on it and these are also published in different peer-reviewed medical journals. Without knowing the rationality, efficacy and safety âBanning this highly reputed product of Indiaâ is very much unethical. Banning of such a globally accepted drug must be reconsidered.

My strongest support is with the above comments. Research findings on indigenous human placental extract which is available at pubmed[www.pubmed.com]is very rational, based on extremely scientific foundation. Efficacy of the drug is unquestionable and it has been accepted by the global scientific community through several high rated international and National scientific journals. Banning of such a successful Indian formulation is a shame for the country itself. Through the research on this placental extract our country has been glorified several times. Without knowing the actual fact, banning the drug is a shameful as per my opinion.

My gynaecologist has suggested me take 10 pakcentrex injection in a period of 20 days to open my blocked right fallopian tube. Please advise if I can go for this treatment as I got to know that placentrex is a banned drug. Please help.

can you please give the references for this artcle

if it is a product derived from human tissues, can it transmit infectious diseases such as HIV ? I also have not seen any publications regarding its efficacy.

Find Pharmaceutical
Medindia provides you a extensive list of indian pharmaceuticals, which is the largest database that is available online

Drug Price list
Find out the price of drugs. Compare prices of different brand names as the same generic drug can cost more or less depending on the company manufacturing them. Also find out their full prescription information.

Drug Toxicity
All drugs are likely to have some side effects. Therapeutic monitoring of drugs is now readily available to make some of the drugs even safer.

Drug Toxicity
Drug toxicity is an adverse reaction of the body towards a drug that results as a side effect of a drug, reaction to a drug or drug abuse.