What is Diabetic Kidney Disease? 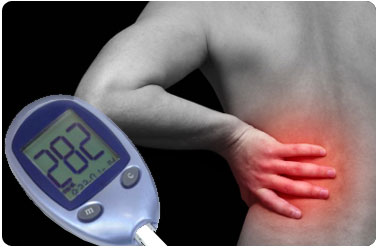 Diabetic Mellitus impairs the function of many organs such as the heart, kidneys, nerves, blood vessels and eyes as it affects the micro-circulation of these vital organs. In diabetes there is deposition in certain layer of smaller arteries and capillaries of a plaque that impairs the circulation. It also leads to calcification of the larger arteries.

Diabetes is the most common cause of amputation of toes and feet due to peripheral vascular disease of the lower limbs. The other common problem is of blindness due to retinal damage -from micro-angiopathy.

Type-I Diabetes occurs when the pancreas secretes very little, or no, insulin and the patient has to be given shots of the hormone for survival. This condition is known as Insulin-Dependent Diabetes Mellitus or IDDM - I.

The onset of IDDM I is abrupt and occurs early in life; it commonly occurs among children and young adults. Hence it is also known as juvenile onset diabetes.

In the case of type-2 diabetes, non-insulin-dependent diabetes, or NIDDM II, the problem occurs due to peripheral resistance to insulin. It usually occurs in susceptible individuals above the age of 40 years. Nearly 95 percent of diabetes cases are type-2 diabetes.

A person with this condition is unable to metabolize carbohydrates, such as starch and, sugar and this leads to increased levels of sugar in the blood and urine. Many with diabetes are unable to reproduce adequate quantities of insulin.

The symptoms become evident long after the actual damage sets in.

The best way to diagnose kidney damage is through a simple urine test which can detect traces of protein. An additional blood test may also be carried out to evaluate kidney function.

Deterioration of kidney function can lead to a build- up of toxic substances and fluids which in turn can lead to kidney damage. It is important to start treatment early, as continued damage can lead to kidney failure. Incidentally, kidney damage is one of the foremost reasons for kidney failure. Once kidneys have failed the only method of management is a dialysis or a kidney transplant. It is possible to minimize kidney damage and to prevent it from worsening through medications, lifestyle modifications and insulin shots according to patients requirements.

Patients who has diabetes or has a family history should always have regular check-ups to rule out any kind of renal disease. And also check this davita dot in/blog/diabetes-definition-causes-and-symptoms to know about the diabetes and kidney disease.

How Can Diabetes Affect The Kidneys And Cause Diabetic Nephropathy?
It was nice to note that theme of the World Kidney Day for 2010 was the effect of diabetes on kidney problems. Yes, diabetes can affect the kidney to the extent that it does not function properly ......

Glycosuria
Glycosuria is an indication of elevated blood glucose levels and a condition in which excess glucose is excreted in the urine.

Ten Amazing Benefits of Quitting Sugar
Sugars, can tempt your taste buds, however they can be harmful to health in many ways. Check out some of interesting benefits of quitting sugar.
Sign up for Wellness Consult a Doctor Sign up for Selfcare
Advertisement
Health Topics A - Z
A B C D E F G H I J K L M N O P Q R S T U V W X Y Z