The number of diabetics & HIV in the population has seen a rise in the last decade. Early detection and better management has at the same time seen the survival rate of HIV patients improve. This increased survival means that besides the HIV in preexisting population of diabetics, there is also new cases of diabetes or other metabolic disorders being detected among this patient population. In the future as the treatment of HIV develops and access to therapy is even further improved, the incidence of HIV-associated diabetes is bound to grow. 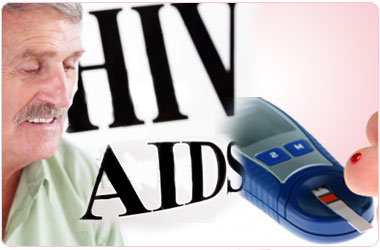 In majority of the patients the type of diabetes associated with HIV is Type-2 Diabetes Mellitus. Patients with diabetes and HIV can be classified in 3 subgroups- Patients with pre-existing diabetes who contract HIV, those who are diagnosed with diabetes at onset of HIV infection and others who develop diabetes after start of therapy. These subgroups require different management as the mechanism of metabolic disregulation vary among all the subgroups. Due to young age of HIV infected people the incidence of pre-existing diabetes is relatively low. Generally patients tend to develop diabetes as they grow older. The incidence of diabetes might also be increased due to certain metabolic factors related to HIV and HIV treatment.

HIV infection is linked with Hepatitis C infection (HCV) too. It has been now known that patients who are over 40-years of age with HCV infection are thrice more likely to develop diabetes than those without the infection.

HIV infection is associated with endocrine abnormalities like deficiency of growth hormone which can contribute to insulin resistance in HIV infected people.

Viral factors which contribute to diabetes risk are an increase in viral burden, a lower CD4 count and longer duration of HIV infection.

Highly active antiretroviral therapy (HAART) has shown a remarkable improvement in the clinical outcome of HIV patients by suppression of viral load, improvement in CD4 count, decrease in opportunistic infections and length of hospital stay and reduction in mortality rate. However HAART has also lead to an increase in metabolic dysfunction, including insulin resistance, diabetes dyslipidemia and lipodystrophy. A recent analysis has shown that diabetes is four times more common in HIV-infected men exposed to HAART. Patients on HAART may also be predisposed to diabetes due to the improved nutritional status and weight gain because of effective treatment of HIV.

For effective management of diabetes in HIV infected people, clinicians should look for underlying risk factors or causes like hypertension, tuberculosis, STD etc and treat them effectively.

Lifestyle modifications like changes in diet, physical activity/exercise and cessation of smoking are important. To deal with the stress of diabetes and HIV, psychological support should be offered.

Oral anti-diabetic drugs should be chosen with care to prevent side effects like diarrhea or cachexia. Choice of drug for HIV patients who present with diabetes is insulin. However to prevent HIV transmission, patients should be taught about proper disposal of sharps like lancets, glucose strips, insulin syringes, pens and needles. Patients should be counseled regarding the potential risks, discomforts and benefits of HAART and encouraged to follow a healthy lifestyle while monitoring hyperglycemia regularly.

Management of pre-existing diabetes should be continued with the same drug therapy that was being used prior to detection of HIV.

If glucose control deteriorates then insulin therapy could be initiated. Insulin is a safe and effective way of treating all the HIV patients, irrespective of type of diabetes.

Latest Publications and Research on Diabetes and HIV/AIDS Management

We should care more about sexual health.CDC reports that over 70 million people are living with STD in the U.S. and members on largest STD support STDdatings.com has reached 600,000 . You can try it out if you're living with herpes, HPV, HIV/AIDS, hepatitis. No rejection or discrimination because we all understand.

Quiz on HIV / AIDS Statistics tell us that the world HIV+ population has risen drastically from 8 million in 1990 to a whopping 33 million in 2007! Even more alarming is the fact that young people (below the age of 25) account for half of these infections! This is ...

Quiz on HIV Symptoms Do you know that there are symptoms for each stage of HIV/AIDS? Learn more from our HIV Symptom Quiz but here's a disclaimer - never go by symptoms alone. Symptoms only indicate the progression of the disease, while only a medical test can confirm ...

Type 2 Diabetes Globalization and changing lifestyles has made diabetes very common in developing countries so much so that India is known as the Diabetes Capital of the World.

AIDS/HIV "AIDS is an epidemic disease, a potentially preventable, deadly infection for which there is no cure, no vaccine, and it is not under control." - National Commission on AIDS, 1993.
Sign up for Wellness Consult a Doctor Sign up for Selfcare
Health Topics A - Z
A B C D E F G H I J K L M N O P Q R S T U V W X Y Z