Dengue fever is a disease caused by mosquitoes infected by the dengue virus and is prevalent in the tropical regions of the world. It is a painful, disabling disease, with the severity of pain similar to that of bones breaking - hence it is also known as Breakbone fever.

Dengue fever affects close to 400 million people worldwide each year, with about 40% of the worlds population being at risk of exposure and infection. Since dengue fever is caused by a virus, it cannot be cured by antibiotics.(1✔ ✔Trusted Source
Dengue

What are the Symptoms of Dengue Fever? 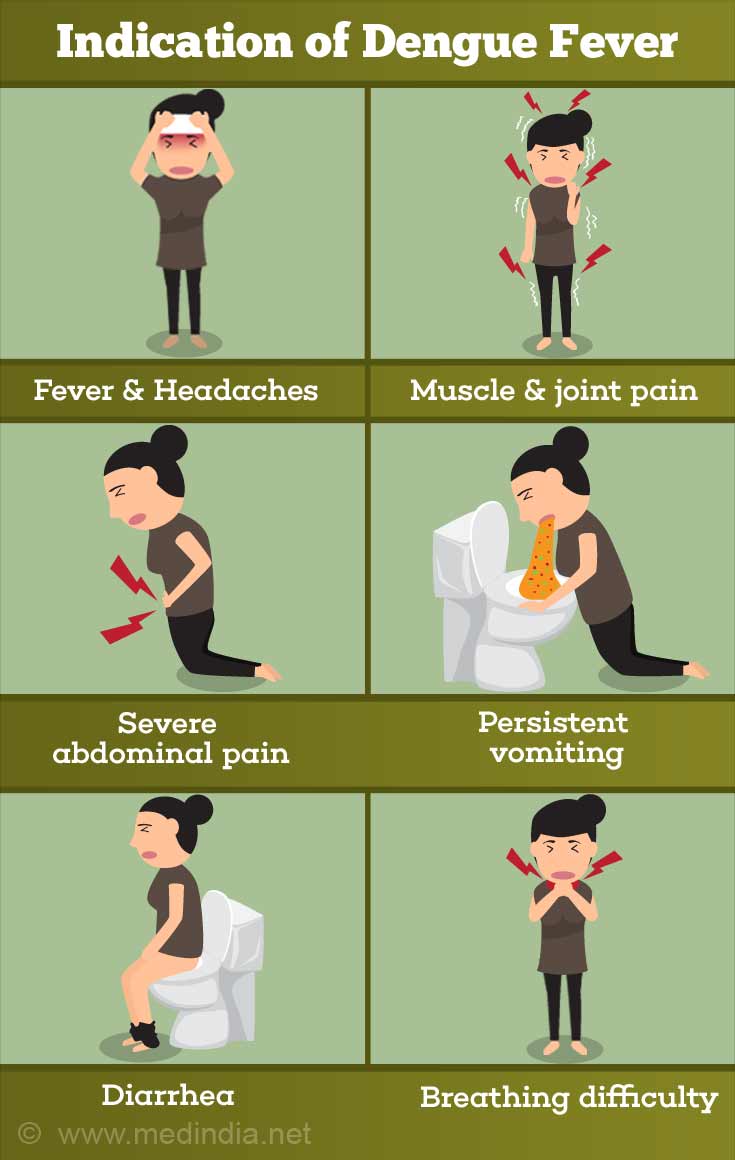 How is Dengue Fever Caused and Spread?

Dengue fever and dengue hemorrhagic fever spread from human-to-mosquito-to-human by the bite of mosquitoes carrying the dengue virus. The dengue virus belongs to a group known as Flavivirus and can be typically divided into four viral serotypes, DEN-1, DEN-2, DEN-3, and DEN-4, which are closely related but differ in their antigens. Many species of mosquitoes under the genus Aedes transmit dengue; in particular, the Aedes aegypti species is most commonly associated with it and the major cause of dengue transmission. This species of mosquito breeds in stagnant waters and usually bites during daylight hours. The virus circulates in the blood for 2-7 days after a person is infected, during which time a mosquito biting the person would acquire it and in turn bites and infects another person. 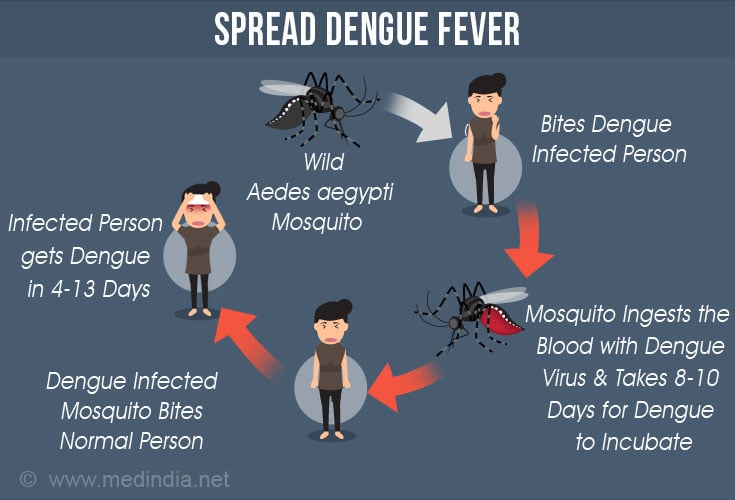 The symptoms typically develop anywhere between 3 to 14 days, but usually start within 4 to 7 days of infection, and may last from 7 or 10 days. The dengue virus doesnt have any detrimental effect on the mosquito that carries it, and the mosquito remains infected for life. Dengue disease is spread when a mosquito bites an infected person and becomes a carrier of the dengue virus. The mosquito then bites another healthy person and thus spreads the disease causing a possible epidemic breakout. A person infected with a single type of dengue virus serotype out of the four, develops resistance to only that particular virus. However, they become much more susceptible to infection by the other three serotypes.(3✔ ✔Trusted Source
Dengue Fever: A Wikipedia Clinical Review

What are the Complications of Dengue Fever?

Dengue fever may sometimes develop into more dangerous forms such as dengue hemorrhagic fever or dengue shock syndrome, which may lead to the development of life-threatening symptoms. Some of the complications caused by the disease include: 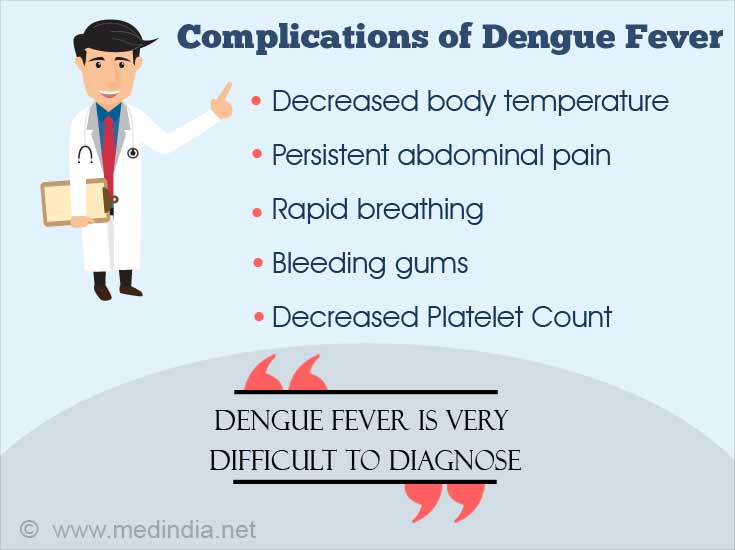 How Do You Diagnose Dengue Fever?

Diagnosis of dengue is considered when sudden high fever is accompanied by severe body, muscle or joint pain. It is important to be evaluated when a person develops fever within two weeks of being in the tropics or sub-tropics. Dengue often causes symptoms that are similar to other diseases such as flu, measles, and typhoid fever etc. Hence investigations are always performed to exclude other disease conditions. Usually, the blood of the patient is tested for the presence of antibodies and virus. Diagnosis of dengue infection can be done by the following methods: 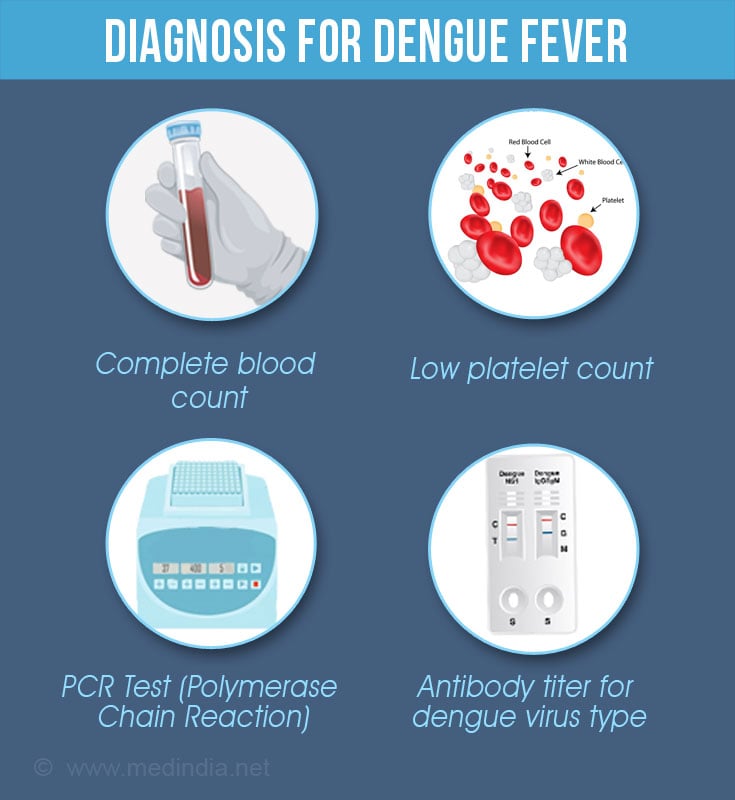 In the case of more serious complications such as dengue hemorrhagic fever, the following diagnosis must be performed:

How Do You Treat Dengue Fever?

Since there are no known antiviral drugs or injections available for the cure of the disease, dengue fever treatment or management mainly involves plenty of supportive care that would eventually help save the patients life. Dengue is characterized by fever and intense body ache. Dengue treatment comprises of reducing the fever with antipyretic drugs such as paracetamol and the body ache with analgesics that help relieve the pain. Drugs such as aspirin and ibuprofen should be avoided as they may increase the risk of hemorrhage. The patient can also be treated with natural home remedies such as papaya leaves, kiwi and other food items that have been proven to help in the increase of platelet count, which becomes lower during dengue. In the case of more severe forms of dengue, such as dengue hemorrhagic disease or dengue shock syndrome, the patient must be admitted to a hospital immediately and given proper care. The mortality rate of a dengue patient without hospitalization is higher by about 50 percent. Treatments such as intravenous fluid replacement should be administered to these patients to prevent shock. Patients should drink plenty of fluids, as dehydration is common among those affected with Dengue.(5✔ ✔Trusted Source
RNAi: Antiviral Therapy against Dengue Virus 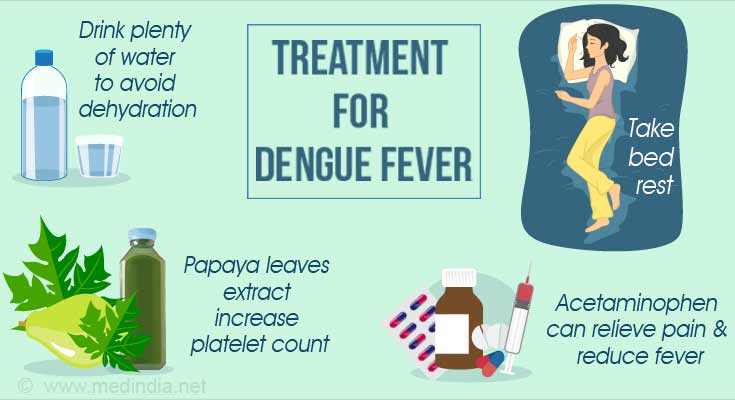 The world's first dengue vaccine, Dengvaxia or CYD-TDV) developed by Sanofi Pasteur was approved for use in Mexico, Philippines and Brazil in December 2015 for the prevention of the deadly mosquito borne disease in people living in dengue endemic areas.

According to Dengue Vaccine: WHO position paper - July 2016, WHO says that countries should consider introducing the CYD-TDV in areas where there is epidemiological data suggesting a high incidence of dengue.

The discovery of CYD-TDV marks a major advance in the field of medicine. CYD-TDV is a prophylactic viral vaccine approved for use in people between the ages of 9 - 45 years. It is a triple-dose vaccine administered on a 0/6/12 month schedule via the subcutaneous route. It contains all 4 serotypes (1, 2, 3 and 4) of the dengue viruses.

CYD-TDV demonstrated protection against severe dengue cases in its phase 3 trials conducted in Asia and Latin America. However, there were limitations in its overall efficacy which was affected by factor like serotype, serostatus at vaccination (whether the person has had a prior infection or not), region or country and age.

New dengue vaccines TV003/TV005 have been developed by the National Institute of Allergy and Infectious Diseases. They produce antibodies to all 4 dengue virus serotypes. In earlier trials, a single dose of either of the vaccines was able to elicit a robust antibody and cellular immune response.

A Phase 3 trial of TV003 has begun in January 2016 in Sao Paulo to test how effective the vaccine is in preventing dengue and to test its safety. Early indications of its efficacy may be seen in less than two years.

Another vaccine developed by Takeda called the Tetravalent Dengue Vaccine (TDV) has also entered its Phase 3 trials early in 2016 in Latin America and Asia. Data from its Phase 1 and Phase 2 trials indicate that it is safe, well tolerated and immunogenic. The Phase 3 trial will check if the vaccine protects individuals at risk for symptomatic dengue across geography, irrespective of their serostatus.(6✔ ✔Trusted Source
Dengue Vaccine: Global Development Update

How Do You Prevent Dengue Fever?

Following certain basic steps is really the most effective way to prevent and fight dengue. Since the only way to get dengue is from a mosquito bite, the best way to prevent it is to avoid mosquitoes and prevent from mosquito bites. This is particularly important if a dengue epidemic is underway in your city or town. Some ways to prevent dengue are described below: 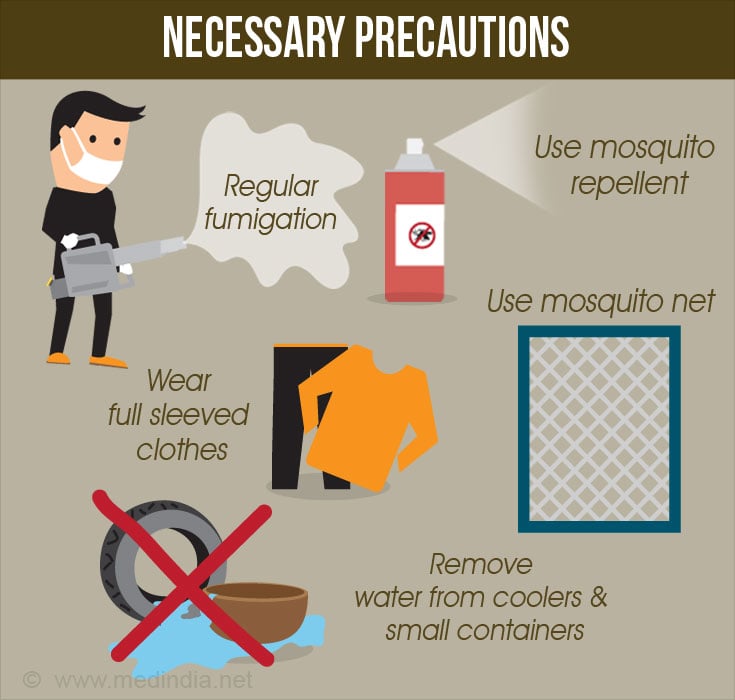 Latest Publications and Research on Dengue

During the month of September , 2015, news reports suggest that number of Dengue patients is on the increase abnormally in northern India, particularly Delhi, Punjab and Haryana. While some patients have died recently, news reports indicate that fear among people of the Dengue spreading more are increasing. In this regard, this Panchkula based Vedic astrology writer would like to let readers know that a precise hint was given in the prediction in article â â Months of substantial concern for India in next year 2015.â- published in online magazine at thesop.org as early as last year on 23rd October 2014. The following highlights of the prediction which could be construed to mean Dengue fever as well are notable from the article : [1]. The affected places predicted were northern or Eastern India specifying Delhi, Punjab and Haryana.(2). The planetary impacts were predicted likely to operate during second half of 2015. (3). It was predicted that massive floods, landslides, earthquake or epidemics could perhaps visit. Again said : Mystery epidemics or health hazards may be upsetting. (4). Last but not least, it was added : â In the end, astrology suggests certain trends which can be either mitigated or softened by timely appropriate human effort.â

Hi all, if u have a fever in this season get your blood test done for dengue, ASAP.If fever accompanied with pain between eyes, head ache, vomiting etc are symptoms of the disease. Far as i have known there is no medicine except the home concoctions that can save you the agony of Drip/ hospitals transfusions etc: 1] Juice extracted from 2 papaya leaves twice a day. 2) Goats milk [fresh and not boiled/ just filtered) approx 250 ml twice a day. 3) To take care of the fever you can have the Crocin/ Tylenol that the doc prescribes. These concoctions are life savers, when medicine seems to have no answer.

Hi my friend suffering from sickness she feel pain in body, and also feeling cold. Can u tell me this symptoms are dengue or normal fever.

hello my wife is suffering from dengue and has been sick since last 6 days she is hospitalized right now what medication should be taken and what time is taken to cure it. plz reply

Dengue is a very dangerous disease; however one can get cured through proper treatments. I had suffered from Dengue a couple of years back. It took me about two weeks to recover completely.

hi iv suffered from dengue 2 weeks ago. there no medicine given to me. only antacid for the stiomach taken every morning. My doctor advised me to drink more water. It may be no medical exsplanation but eating 10pcs each day of quail eggs help me improve my platelet. taua taua leaves also is a big factor for me to be able to recover.

Chikungunya
Chikungunya is a viral disease spread by mosquito bites; it causes fever, severe joint pain and rash on the body. Chikungunya occurs in Africa, Asia and the Indian sub continent.

Interesting Facts and Statistics about Malaria
Malaria is endemic to many parts of the world. Many lack basic knowledge about preventive measures or medications to fight malaria. Learn about some useful and interesting malaria facts.

Top 10 Interesting Health Facts on Dengue
Dengue has become the talk of the town! Here we are bringing you some interesting health facts on dengue to generate more awareness on the disease.

Top 15 Dos and Don'ts for Preventing and Managing Dengue Fever
Dengue can be easily prevented and managed if you follow proper precautionary measures. Here we give you the most important dos and don'ts for dengue fever.

Infographics on Dengue Fever
Dengue fever infographic includes all the vital information you need to know about dengue fever.