What is a Delusion?

A delusion is a false belief that a person strongly holds on to despite adequate evidence that it is false. It takes the person away from reality. Delusions are logically absurd and are not associated with the persons cultural or religious background or their intelligence levels.

Delusions are characterized by certainty, incorrigibility and impossibility. The person believes that his delusion is very much real and this belief cannot be shaken or reasoned out. Also, a delusion is absolutely untrue. The intensity, extent to which patients are away from reality and the coherence may vary. The variations in delusions depend upon the wishful thinking and pathological exaggeration of normal tendencies.

Below are some conditions that should be differentiated from delusions:

Delirium is characterized by a state of utter confusion. It is caused by physical or mental illness, any cause of brain dysfunction or metabolic disturbances in the brain. Delirium has a fluctuating course, disturbances in sleep cycle, disorganized speech and thought, altered perceptions and emotional liability. The person is completely disoriented. Delusion is a clear thought and belief that a person holds to, and is logical, although impossible. Delirium is a sudden change in thought process while delusional changes in thought process occur over a period of time. 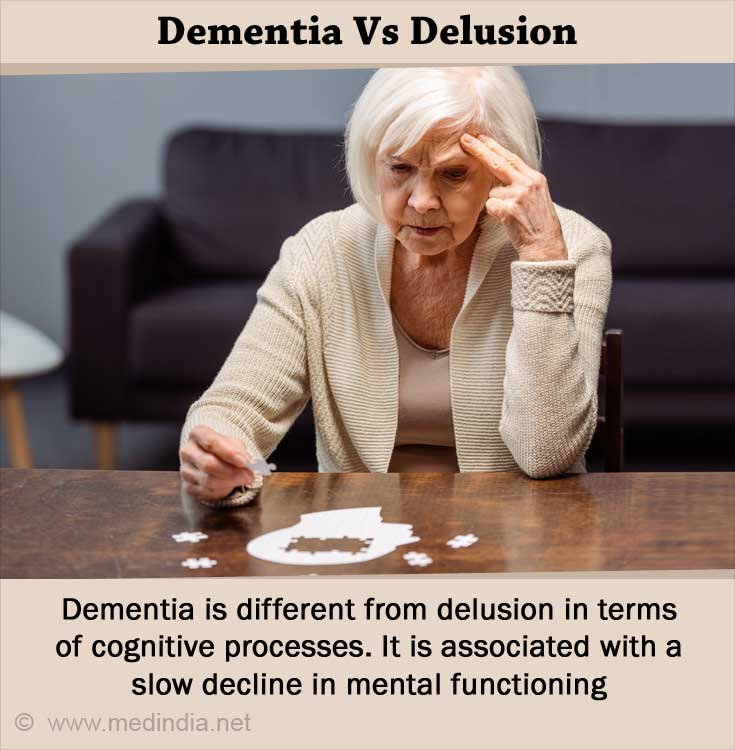 Hallucination is a perception of something in the absence of the external stimulus. For example, hearing voices and talking to dead friends who are clearly visualized. Hallucinations can occur in all the sensory modalities like visual, auditory, olfactory (smell), tactual (touch), gustatory (taste) and others such as movement and balance sensations. A person with delusions does not actually hear sounds but holds on to a firm belief of something happening to him /her.

Dementia is different from delusion in terms of cognitive processes. It is associated with slow decline in mental functioning such as memory, attention, language and problem solving.

Delusions are characterized into different types based on the manner in which they present.

A bizarre delusion is usually very strange and completely impossible or unimaginable for a persons lifestyle or culture. For example, a belief that an alien has taken away the patients digestive system. A person with non-bizarre delusion would hold to a belief that is false, but quite possible in his or her life. For example, a woman believing that her next-door neighbor is in love with her and constantly is pursuing him for marriage.

A mood-congruent delusion refers to a delusion that is a part of the persons mood such as depression or mania. A depressed person may believe that their building is going to collapse and all of them would be dead while a person with mania may believe that he is a famous personality with exclusive talents. A mood-incongruent delusion is not dependent on the persons mood. A person believing that thoughts are being inserted into his mind by some person or group of people is an example of such a delusion.

Most of the delusions that occur as a psychological or psychiatric symptom can be categorized on the basis of the theme of the delusion. Some of the common delusion themes include:

A person with delusion of jealousy believes that his or her lover or spouse is having an affair, despite constant reassurance and proof. The person keeps looking and gathering evidence to support his belief and confronts the spouse about the non-existent affair.

The person falsely believes that most of the statements that he or she hears, reads or any events that happen around him are directed towards him with personal meaning or significance. For example, a person may be watching television and believes that the events happening in it are directed to self. These beliefs may be negative like pointing and blaming or can have a grandiose quality.

Delusion of Mind Being Read

This kind of delusion is different from thought broadcasting. The person falsely believes that his mind is being read by people, without being heard aloud.

Delusions of Guilt or Sin

This kind of delusion is also called self-accusation. The person feels guilty to an extent that it may not be real. The person may believe that he or she is responsible for some great disaster with which there can be no possible connection.

The person with grandiose delusions exaggerates his or her sense of self-importance. He or she is fully convinced that special talents, powers or abilities exist in him or her and believe that they are famous. Such a person also usually believes that he or she has achieved something extraordinary but has not received sufficient recognition.

The theme of delusion of persecution includes the person being followed, cheated, poisoned, spied on, and harassed, among others. The person feels that he or she is being conspired against and hurdles are created in his or her path of achievement. 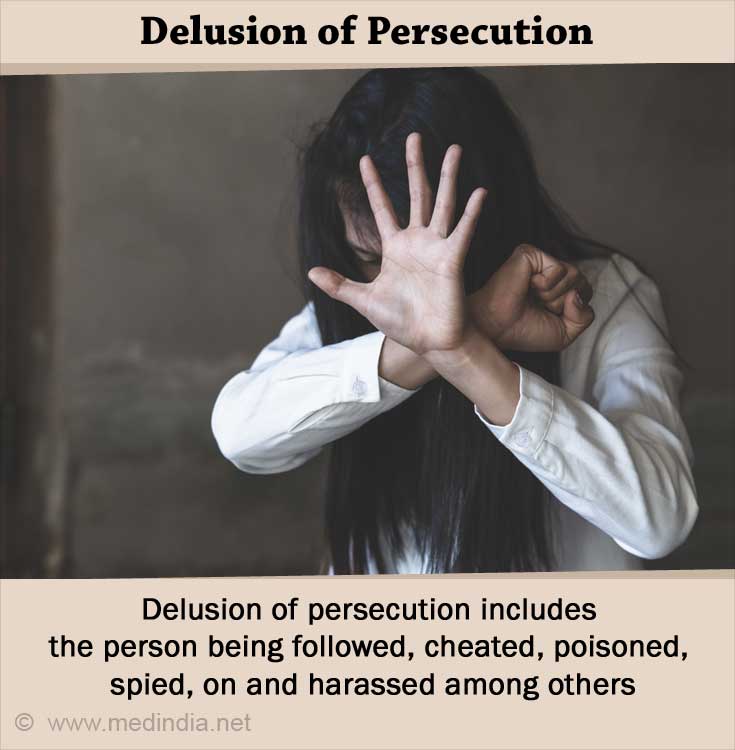 The delusion involves bodily functioning, physical appearance and sensations. They believe that their body is damaged or diseased. They may believe that they are emitting a foul body odour, or be obsessed with being malformed or amputated.

Risk Factors and Causes of Delusion

Finding the exact cause of delusions has been a challenge, but several theories have been developed to explain the risk factors of developing delusions.

Genes have been blamed to make a person vulnerable to the development of delusions, based on the evidence that delusional tendencies have been found to run in families. Distorted perceptions of life or ways in which people understand life can alter their perception and thinking, leading to delusions.

Persons with certain types of delusions have shown consistent pattern of brain injury to the frontal lobe and right hemisphere. Such deficits or injuries in the right hemisphere can result in overcompensation of the left hemisphere, probably leading to delusions. 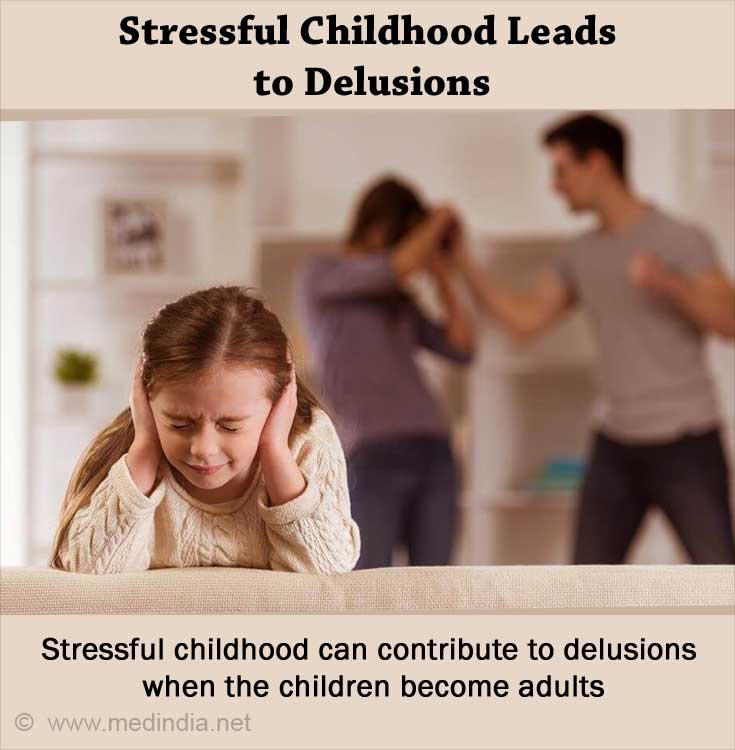 Distorted and illogical explanations for life experiences result in delusions. These explanations turn into beliefs that are reinforced with the satisfaction the individuals get out of it. The delusions are present when life events threaten self-esteem or existence. Blaming others for their difficulties, failures, stress and holding on to a positive opinion about themselves eventually result in delusions in some individuals.

Most of the persons with delusions have a history of an event connected with the delusion they have. The particular event would have affected them so intensely that it comes out as a delusion. For example, a woman kept visiting her neighbor, who had been her boss prior to a couple of years. She believed and claimed that they were in love with each other and were to be married, while the man denied any such connection. On enquiry, the man said that when they worked together, she had made romantic advances towards him.

Three main criteria were described by psychiatrist and philosopher Karl Jaspers, for a belief to be considered as delusional.

However, some background or reality may be associated from which the delusional thought would have stemmed out. The psychiatrist who diagnoses the delusional disorder needs to verify whether the belief is false and must not assume that it is so. There have been instances when true beliefs were erroneously classified as delusional.

The presence of other symptoms such as anxiety, fear or paranoia should also be looked out for in a person with delusions. Mental state examination should include evaluation of appearance, mood, affect, behavior, rate and continuity of speech, evidence of beliefs, orientation to time, place and person and attention and concentration, etc.

Treatment for delusions is challenging and often the underlying cause of the psychological or psychiatric disorder has to be treated first. If the delusions are due to substance abuse or other organic causes, then treatment for the original problem can reduce delusions. The person having delusions may not be willing to accept these delusions as something false and denies the necessity of treatment. The patients relatives may consult the primary care doctor, a psychiatrist or other mental health professional as soon as the problem is suspected.

The most important factor that affects the efficacy of psychotherapy is the patient-therapist relationship. The client must believe that the therapist does not think that he is crazy or mad. Psychotherapy centers on the realistic problems of the person and the goals the person wants to achieve. Encouraging positive behavior, reinforcing achievements personally and occupationally, and improving the self-confidence and self-esteem is the aim of the psychotherapy.

Use of antipsychotic drugs is usually for managing delusions, although its effect may be temporary or even questionable. The client may get suspicious about the medications given if he or she has delusions of persecution or guilt.

Other treatments like electroconvulsive therapy, insulin shock therapy and psychosurgery have been tried, but are found to be ineffective or sometimes dangerous.

Cases of Delusions Reported by Psychiatrists

Latest Publications and Research on Delusions

Schizophrenia Schizophrenia is a mental disorder characterized by symptoms of thought, behavior and social problems.

Delirium Delirium is a sudden disturbance in mental function that causes confusion and decreased awareness of one's environment. It is classified into three subtypes - hyperactive, hypoactive and mixed.

Personality Disorder Screening Test Are you uncomfortable in close relationships? Are you anxious, intense, or demanding and need to know why? You may be suffering from a personality disorder. Use our test to screen for symptoms.

Hallucinations Hallucinations or false perceptions, are often associated with mental disorders and neurological disorders. In the elderly, it occurs with dementia and auditory hallucinations are most common.
Sign up for Wellness Consult a Doctor Sign up for Selfcare
Advertisement
Health Topics A - Z
A B C D E F G H I J K L M N O P Q R S T U V W X Y Z