WHO sponsored Research Into Global Hazards of Travel (WRIGHT) Project has discovered that the DVT risks approximately doubles after a long-distance flight.

Since the 1950s there have been papers published on a possible association between (DVT) and long-distance air travel. But what really caught public attention, and a renewed interest in the condition was a couple of unexpected deaths that occurred, not too long ago, after long distance air travel.

DVT is known to occur in about 1-2 of every 1,000 people in the general population and, also, in almost one-third of those individuals who have undergone a major surgery.

Although the risk from is small, it would be a good idea to be aware of DVT and its symptoms.

DVT is a condition in which a blood clot forms in the deep veins of the legs, mostly in the calf region. The blood from the veins in the leg is returned to the heart by the pumping or squeezing action of the leg muscles. This requires more effort as the leg muscles have to work against gravity. If there is a restrain in blood flow as in the case of a sedentary person or a person sitting without moving around (as in the case of those travelling long distance), then blood gathers in the legs deep veins, sometimes forming a clot or a thrombus. This condition is known as deep vein thrombosis.

The clot may break away from the leg vein, travel through the circulating blood and lodge itself in the hearts blood vessel. If it lodges in the pulmonary aorta, it blocks the blood supply from the heart to the lungs. The break-away clot is known as embolus and the prevailing complication is known as pulmonary embolism.

WHO sponsored Research Into Global Hazards of Travel (WRIGHT) Project on Air Travel and Venous Thromboembolism has discovered that the DVT risk approximately doubles after a long-distance flight (greater than 4 hours). This risk increased when other risk factors were present. This condition does not just apply to flight but also to long travels in cars, buses or trains where people are compelled to sit for long hours by being immobile.

Latest Publications and Research on Deep Vein Thrombosis and Flying

How to Exercise on a Plane - Animation
Are you taking a long flight? Learn some simple exercises to help prevent the risk of DVT or deep vein thrombosis and swelling of your feet.
READ MORE

Air travel: To fly or not to fly: Heart Disease - DVT - Pregnancy - Diabetes - Ear Aches
Air travel is for everyone, even those with medical conditions.
READ MORE 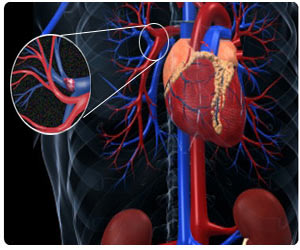 Deep Vein Thrombosis
A blood clot (thrombus) in the deep venous system of the leg leads to deep vein thrombosis (DVT). DVT is a major cause of morbidity and mortality.
READ MORE
Sign up for Wellness Consult a Doctor Sign up for Selfcare