Crigler-Najjar syndrome arises due to the lack or deficiency of the enzyme uridine diphosphate glucuronosyl transferase. Type 1 and type 2 forms of the disease have been described.

Crigler-Najjar syndrome (CNS) is a rare inherited disorder of bilirubin metabolism. Bilirubin, a chemical formed in the liver by the breakdown of blood, cannot be broken down in this disease. Excessive bilirubin results in jaundice. Type 1 and type 2 forms of the disease have been described. Type 1 disease is severe and soon after birth while type 2 disease (also called Arias syndrome) appears later, usually in late infancy or childhood. Children with type 1 disease usually have very high levels of bilirubin and may die of kernicterus (accumulation of bile pigments in brain) by the age of one year, though survival to adulthood is possible. Treatment may include phototherapy and liver transplantation. 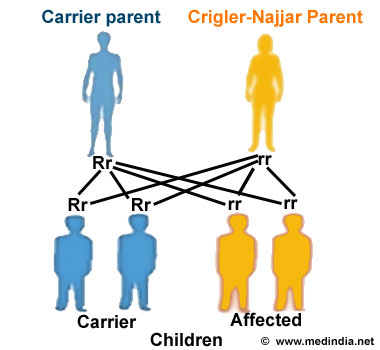 Damage to the brain is less likely in type 2 Crigler-Najjar syndrome. Affected children usually have less severe hyperbilirubinemia (elevated bilirubin levels) and survive to adulthood. The disease responds to treatment with phenobarbital.

Crigler-Najjar syndrome arises due to lack or deficiency of the enzyme uridine diphosphate glucuronosyl transferase. This is a liver enzyme required to change bilirubin into a form that can be removed from the body through the bile. In the absence or deficiency of this enzyme, bilirubin cannot be broken down and accumulates in the body. This leads to jaundice, i.e. yellow discoloration of skin and eyes. Excess bilirubin can also damage the brain, muscles, and nerves. Mutations in the gene UGT1A1 are responsible for the syndrome. In Crigler-Najjar type 1, essentially no functional enzyme activity is present. Patients with Crigler-Najjar type 2 have up to 10% of normal enzyme activity. 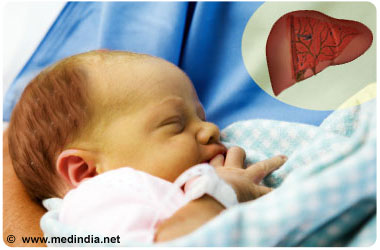 The syndrome is an inherited one that runs in families. It is inherited in an autosomal recessive fashion, i.e. a copy of the defective gene from both parents is required for the child to develop the serious ailment. Parents who have just one defective gene are called carriers. They have half the enzyme activity of a normal individual.

Crigler-Najjar syndrome is extremely rare with only a few hundred cases described in the world literature. It occurs in less than 1 per 1,000,000 births. All races are equally affected by the syndrome. There is no sex predilection. Consanguineous marriage (i.e. marriage between blood relations) is a risk factor.

Phototherapy - Medical Dictionary / Glossary
The exact meaning of the medical terminology, 'Phototherapy' - Treatment by exposure to light, is clearly explained in Medindia's glossary of medical terms

Biliary Atresia
Biliary atresia is a serious condition that occurs due to the obstruction of bile ducts and results in cirrhosis of liver in infants.
Sign up for Wellness Consult a Doctor Sign up for Selfcare
Advertisement
Health Topics A - Z
A B C D E F G H I J K L M N O P Q R S T U V W X Y Z