Conjunctivitis or Pink Eye or Madras Eye causes redness and soreness of the conjunctiva and is responsible for 1% of all emergency visits to a hospital. 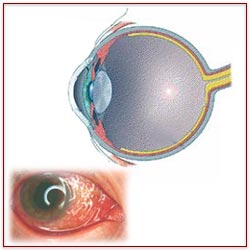 Conjunctivitis is better known as Pink Eye in North America, and also Madras eye in India. It causes redness and soreness of the clear layer covering called the conjunctiva that coats the white of the eye and the eyelids. Conjunctivitis is the most common eye disease in the western hemisphere and varies in severity from mild inflammation with tearing to a severe inflammation that causes tissue injury and tissue death. It is responsible for 1% of all emergency visits to a hospital. Allergies, bacteria, viruses, or chemicals usually cause it. Bacterial conjunctivitis presents with a red eye, pus discharge, a gritty sensation, and occasionally sticking shut of the eyelids. Viral conjunctivitis follows an upper respiratory infection such as the common cold. The most common reason of pink eye is due to an Adenovirus infection  the same virus is responsible for common cold.

Looking at the eye with conjunctivitis your doctor may not be able to tell if it is due to infection from bacteria or virus or due to allergy.

Pinkeye caused by a virus can be a very contagious infection and can be prevented by not touching the eye and by frequent washing of your hands.

Epidemics of conjunctivitis can hit a large population in an area and many cities in the world face this problem from time to time. Indian cities such as Mumbai, Chennai and Delhi have faced such epidemics at regular frequencies. Usually the infection can be very contagious and a few people can infect a large population in a short span of time. American Journal of Infection Control in 2002 reported that approximately 3 million school days are lost as a result of acute conjunctivitis (Guinan etal).

A type of conjunctivitis called acute hemorrhagic conjunctivitis (AHC) was first reported from Ghana in 1969. Since then epidemics has occurred in numerous other countries, - China, India, Egypt, Cuba, Singapore, and Japan. In 2006 the epidemic occurred in Brazil and over 200,000 people were affected.

Most of these epidemics have a self-limiting benign course and usually there are no visual impairments.

The FDA cleared a medical device to detect conjunctivitis due to adenovirus infection and help physicians. It takes 10 minutes to do the test and the reading can be done in doctors office.

Latest Publications and Research on Conjunctivitis

Wear dark glasses if you have Pink ey and are going out in the sun, also have tissue paper as running eyes is common. Frequent hand washes as indicated in the article is very important to prevent infection from person to person.

Myopia Myopia is the inability of a person to see the distant objects clearly. Myopia is also known as near or short sightedness.

Retinoblastoma - Causes, Symptoms, Diagnosis, Treatment & Prevention Retinoblastoma is a type of cancer of the eye occurring in children. Early diagnosis and treatment, and genetic counselling can go a long way in saving life and vision in children and siblings at risk for this disease.

Eye Pain Symptom Evaluation Eye pain usually follows trauma, eye infection or inflammation of the eye and the surrounding structures. The cause of eye pain can be diagnosed based on the type of pain and associated symptoms.

Pink Eye Symptom Evaluation Pink eye, is the redness in the eye, which is caused due to inflammation of the conjunctiva. Conjunctiva is the lining that covers the eyelid and eye surface.

Symptom Evaluation of Watery Eyes Do your eyes water? Are you experiencing excessive tear production? Prevent persistent tearing as these signs may not be just due to conjunctivitis.