What is Compartment Syndrome?

Compartment Syndrome is a painful and serious condition, which occurs when there is an increased or excessive pressure within a confined space in the body. It mainly affects areas of the body called as fascial compartments. Fascial compartments are present around the muscles and they are a special tissue that forms a membrane layer around the muscles. This is especially seen in the muscles of the leg, feet, forearms or hands, or wherever there is an enclosed space in the body. Muscles of the abdomen and buttocks are not commonly affected.

The pressure within the muscles of the affected area could increase to dangerous levels, affecting the flow of blood to and from the affected tissues thus resulting in decreased nourishment and oxygen flow to the tissues (ischemia) and nerves. If not treated promptly, it could lead to an emergency situation requiring a surgery and possibly an amputation.

What are the Types of Compartment Syndrome?

Compartment syndrome can be classified as either acute or chronic.

Acute compartment syndrome: This is the most common type of compartment syndrome and typically occurs after a traumatic injury such as a fracture or an accident which can crush your arms or legs, though in rare cases it can also develop after a minor injury. It is considered as a medical emergency and if not treat promptly can cause permanent muscle & nerve damage resulting in loss of function of the limb.

Chronic (exertional) compartment syndrome: It is also known as an exertional compartment syndrome which is an exercise-induced condition caused primarily by activities which involve repetitive workouts such as tennis, swimming, running, amongst others. This type is usually not considered as a medical emergency condition.

What are the Causes of Compartment Syndrome?

What are the Symptoms of Compartment Syndrome?

How do you Diagnose Compartment Syndrome?

Physical tests: Your doctor will conduct a physical examination to check for signs of acute or chronic compartment syndrome as well as ask you for the symptoms that you are experiencing. Your doctor may also press on the affected area to determine the intensity of your pain. He might rule out tendonitis by pressing on your tendons.

Imaging tests: Tests like MRI Scan uses powerful magnets and a computer to take pictures of the injured area. Imaging tests such as X-rays may be done to examine if your tibia does not have a stress fracture. Near infrared spectroscopy (NIRS) determines if your muscles have adequate blood flow.

Doppler ultrasound: This test is done to check the arterial flow and deep venous thrombosis.

How do you Treat Compartment Syndrome?

Acute compartment syndrome is a surgical emergency and must be treated in the hospital by a procedure known as fasciotomy. Unfortunately, currently there are no modes of nonsurgical treatment available.

Fasciotomy involves making an incision to cut open the skin and fascia around the affected compartment to relieve the pressure inside the muscles and avert permanent tissue damage.

Sometimes, the swelling can be quite severe so the skin incision cannot be closed immediately but should be done after about 48-72 hours when the swelling subsides. At times, a skin graft might be needed to close the wound.

In this form of compartment syndrome, the pain and other symptoms usually subside once the activity causing it is stopped, hence rarely requires any treatment. In some cases, physical therapy and Orthotics (inserts for shoes) are used as therapy along with anti-inflammatory medications.

If non-surgical therapy fails, surgery could be an option, however this is an elective procedure and not an emergency. Similar to acute compartment syndrome, the surgeon may cut open fascia, which surrounds the compartment to reduce the symptoms.

How to Manage Nerve Injuries
Nerves are like the 'telephone wiring' system in human body carrying messages from brain to the other parts of the body. Any injury to nerve results in impaired transmission of reflex messages.
READ MORE 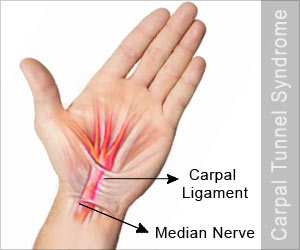 Carpal Tunnel Syndrome
Carpal tunnel syndrome (CTS) is a condition caused by increased pressure on the median nerve at the level of wrist.
READ MORE

Fasciotomy - Surgical Procedure
Fasciotomy is a surgical procedure where the fascia is incised to relieve the compartmental pressure in patients with the compartment syndrome in the limbs.
READ MORE