A colon polyp is a fleshy growth on the inside of the colon, also called the large intestine. In general, the larger a polyp, the greater the likelihood of cancer.

A colon polyp is a fleshy growth on the inside of the colon, also called the large intestine. Colon polyps are extremely common; the incidence increases with age. About 50% of the people over the age of 60 are estimated to harbour at least one polyp. The importance of polyps is that they can grow large enough and turn cancerous. The incidence of colon cancer is high in developed countries. It is a leading cause of death. In general, the larger a polyp, the greater the likelihood of cancer. A polyp may either be sessile (attached to the colon directly without a stalk) or pedunculated (attached to the colon with a stalk). Polyps are classified as either non-neoplastic i.e benign or neoplastic i.e cancerous. Polyps may cause rectal bleeding or partial bowel obstruction (rare). 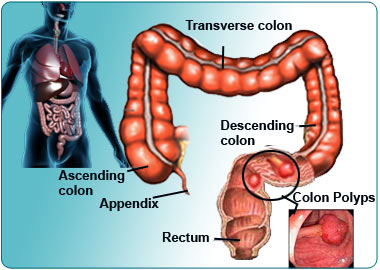 Polyps are classified as either non-neoplastic (benign) or neoplastic. 90% of all mucosal polyps detected in the large bowel are non-neoplastic polyps. These are also called Nonadenomatous polyps. These benign polyps are subcategorised into hyperplastic, inflammatory, lymphoid, and juvenile polyps. Juvenile polyps or hamartomatous polyps usually develop in the rectum of children younger than 5 years of age.

Adenomatous polyps (or adenomas) are the neoplastic types that can turn cancerous (malignant). They are more common in the distal colon and rectum. While smaller lesions are usually pedunculated (having a stalk or peduncle) the larger polyps can be sessile. Adenomas are common, particularly in elderly populations. Prevalence is higher in men. They are classified based on microscopy as tubular adenomas, tubulovillous adenomas (villoglandular polyps), or villous adenomas.

Volvulus - Animation
A volvulus is surgical condition that results in a loop of the bowel twisting on itself. This can be a life-threatening condition due to the loss of blood supply and accumulation of toxic gases and fluids in the portion of the obstructed bowel ...