What is Chronic Renal Failure?

Chronic renal failure (CRF) is a gradual, usually asymptomatic and progressive loss of the ability of the kidneys to function normally.

The change is irreversible and is due to loss of nephrons of the kidney. The nephrons are basic functioning units of the kidney and there are normally about one million nephrons in each kidney.

In patients with Chronic Kidney Disease, the kidney is no longer able to clean toxins & waste products from blood and concentrate the urine.

By the time patients begin to experience symptoms of kidney failure, they would have lost most of their kidney function. Simply, it can be interpreted as kidneys gradually stopping to work.

Polycystic kidney disease, hereditary nephritis and some forms of glomerulonephritis.

Like diabetes and hypertension (forms about 50 to 60% of CRF).

Like reflux nephropathy, chronic obstruction of the bladder and neurogenic bladder.

Untreated can proceed to a chronic state and cause chronic renal failure.

Pain Killer drug usage over a prolonged period of time can lead to kidney failure. These are classified as Non-Steroidal Anti Inflammatory Drugs (NSAIDs) by doctors. There is a long list of these drugs and the most common include aspirin, ibuprofen and naproxen, indomethacin, Ketorolac, Diclofenac, Piroxicam, Mefenamic acid and Celecoxib.

Every cell in the kidney can have a unique, non-redundant function, and dysfunction of a specific cell type which presents as a specific symptom in people. Using the single cell approach, the scientists have been able to understand how kidney disease develops at the level of a single cell.

The manifestations of chronic renal failure do not show up until there is profound loss of kidney function. This is because the kidney tries to compensate for loss of nephrons with over-activity in the remaining functional nephrons. But as the kidney deteriorates, every system of the body shows defects of which some of the below mentioned are important. Occasionally, it is discovered on routine blood test when the patient has minimum or no symptoms.

As per data, it is most commonly seen in:

Chronic renal failure is diagnosed by the observation of a combination of symptoms, physical examination and elevated blood urea nitrogen (BUN) and creatinine (Cr) levels that are persistently present over at least 3 months.

The following abnormalities found in the blood may signal CRF: 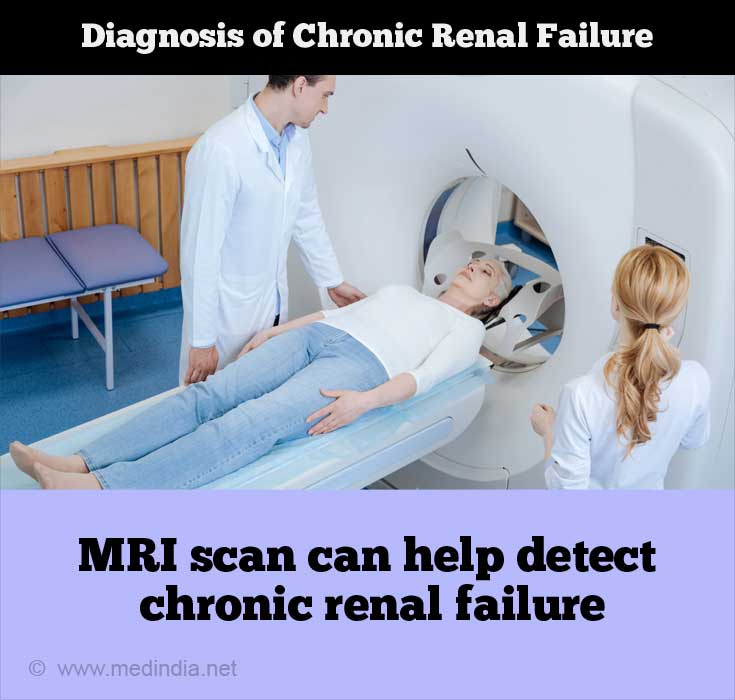 However patients with diabetic nephropathy often have preservation of kidney size despite CRF.

Whether renal failure is acute or chronic usually can be distinguished by comparing prior test results (e.g., from the past several months or years). It is difficult to make the distinction without previous test results.

What are the stages of chronic kidney disease (CKD)?

In Stage 1 and Stage 2 CKD, there are often few symptoms. Hence detection is difficult, but if diagnosed very favorable results are achieved.

In Stage 3 CKD, anemia (a shortage of red blood cells) and/or early bone disease may appear and should be treated to help you feel your best and reduce problems down the road.

When CKD has progressed to Stage 4, it's time to begin preparing for dialysis and/or a kidney transplant.

Creatinine clearance of less than 60ml/min is indicative of Chronic kidney disease. And less than 15ml/min means an advanced stage V CKD. This stage is also called End-Stage Renal Disease.

A spectrum of complications arises along with development of chronic renal failure.

Some of the important ones are as follows:

Associated diseases that cause or result from chronic renal failure must be controlled.

Hypertension, diabetes, congestive heart failure, urinary tract infections, kidney stones, obstructions of the urinary tract, glomerulonephritis, and other disorders should be treated as appropriately and also treat the serum cholesterol if high.

Blood pressure should be less than 130/80 if there is CKD.

If there is kidney disease due to diabetes or there is protein in the urine, the best blood pressure medications for treatment are angiotensin converting enzyme (ACE) inhibitors or angiotensin receptor blockers (ARBs).

If there is CKD due to diabetes or if there is protein in the urine, it is best to take an ACE inhibitor or an ARB, even if your blood pressure is normal to postpone the end-stage of the disease.

Blood transfusions or medications such as iron and erythropoietin supplements (to control anemia).

Restriction of fluid intake - often to an amount equal to the volume of urine produced.

Decease dietary protein restriction (0.6-0.8 gm/kg/day) may slow the build-up of wastes in the bloodstream and control associated symptoms such as nausea and vomiting.

Salt, potassium, phosphorus, and other electrolytes may be restricted.

Dialysis or kidney transplant may be required eventually.

Diabetes is the most common risk factor for kidney disease, but this does not mean that in all the diabetics, the kidneys will fail.

Controlling your blood sugar and getting regular urine tests to check for protein (microalbumin) levels help in early diagnosis of kidney disease among diabetics and hence regular checks and vigilance are a must.

Even if the kidney disease develops, doctors can keep the kidney working as long as possible.

There are many ways to help delay or prevent kidney failure, especially when CKD is diagnosed in the mild to moderate stages. These include:

People who have systolic or top number of blood pressure between 120 and 139, or between 80 and 89 for the diastolic or bottom number are prone to develop high blood pressure unless they measure to prevent it.

Two types of blood pressure medication slow the action of angiotensin, a substance that may contribute to kidney disease progression.

Studies have shown that angiotensin converting enzyme (ACE) inhibitors and angiotensin receptor blockers (ARBs) can help slow progression of kidney disease in people with diabetes, even if they do not have high blood pressure. The generic names of some common ACE inhibitors are captopril, ramipril, enalapril, and lisinopril.

Some common ARBs are losartan,telmisartan, olmesartan, candesartan, and valsartan.

b. Controlling Blood Glucose in Diabetics

If you have diabetes, strict controls of your blood glucose levels can help slow the progression of kidney disease. Keep your hemoglobin A1c, which measures blood glucose control over the last three months, to less than 6.5%.

Urinary Blockage or Infection - In some cases, the kidney disease itself can be treated. If you have an obstruction that blocks your urine flow, surgery may help. If you have an infection, antibiotics may clear it up.

Damage Due to Drugs - If damage is due to the effects of prescription or non-prescription medications, your doctor may be able to suggest a different medication that is less harmful to your kidneys. If you have CKD and are prescribed antibiotics, talk to your doctor about the effect it may have on your kidneys. Painkillers (even over-the-counter medicines) can cause damage to your kidneys. Talk to your doctor about all medications you take. Sometimes diagnostic studies are ordered with contrast dye. It may be necessary for you to have the study, but first find out if there are alternative methods.

Steroids and/or other immunosuppressive medications - Some diseases, such as IgA nephropathy, glomerulonephritis, and lupus can cause kidney damage when your immune system overreacts and inflammation occurs. It is sometimes possible to slow the disease process by controlling the immune system with steroids and/or other immunosuppressive medications.

d. Stop Smoking - Smoking is a risk factor for faster progression of kidney disease, so stopping smoking can also help slow progression. Avoiding too much protein and phosphorus in the diet may help, as well.

Check with your doctor to find out whether any of these things might help slow the progress of your kidney disease.

CRF is often slow in its onset and progression. The rate of progression is variable, but usually renal function steadily declines resulting in end-stage renal disease (ESRD).

Once ESRD is reached, the patient requires renal replacement treatment in the form of dialysis or kidney transplantation. If this is not provided, the patient's life is endangered due to fluid overload and accumulation of toxins in the blood.

There is no definite prevention modality available but, adequate control of diabetes, hypertension and other risk factors delay the onset of disease process in suspected individuals. Regular screening for the disease in patients with risk factors can help diagnose the disease earlier and control it better.

Kidney stones form when your urine contains more crystal-forming substances such as calcium, oxalate and uric acid than the fluid in your urine can dilute.

I have been diagnosed with CKD 2 years ago and I did what my Nephrologists told me. Started dialysis at the earliest and now I am doing good. I would recommend www davita dot com, they are no.1 Kidney treatment specialist in Bangalore and I have got my kidney transplant from Davita center in Bangalore.

My father will be undergoing dialysis starting today twice in a week.He is 63.Both his kidneys are not functioning.I have just 2 queries. 1. can the no of dialysis be reduced from 2[in a week] to 1 in the near future?if so what are the things that needs to be done? 2. Any other alternative that can be suggested other than dialysis/transplant.Giving medicines cant be an option? please advise

my brother of 18 yr old is diagnosed as chronic renal failure with the creatinine value 12, urea 150, hb 6, urine albumin , bp 140/90,without any edema and other symptoms. he is having fatigue may be because of anaemia and normal urine output. the cause is still unknown.how long can he live? whether can he do kidney transplant without dialysi? any other options are there than dialysis and transplantation? family members are so tensed? where can he continue his studies?

Can a Kidney Transplant procedure be considered as a treatment for Chronic Renal Failure related to the Polycystic Kidney Disease? This question is from the perspective that even after the post operative phase, life long medication is required to sustain the Transplant.

Acute Renal Failure
Acute renal failure is the sudden cessation of the functioning of kidneys, that can be due to reduced renal blood flow, damage to renal tissues.

Quiz on Kidney Stones
Kidney stones or calculus produces the most severe form of pain in humans. The pain has often been described to be worse than childbirth, broken bones, gunshot wounds, burns, or surgery. Once you form a kidney stone you are always susceptible to ...