Chromoblastomycosis, a long-term skin disease due to fungal infection, affects the skin and the subcutaneous tissue. Certain types of fungi found in soil, wood and decaying plant material enter the body through pricks of thorns or wood splints and cause raised crusted lesions of the skin and subcutaneous tissue. The lesions can range from small nodules to large papillary-like eruptions.

The term Chromoblastomycosis can be better understood by splitting the terms as follows: 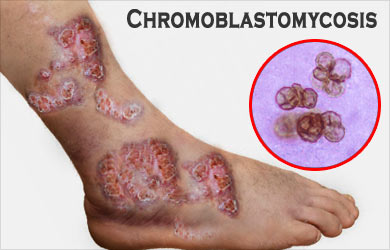 Other names for this chronic fungal infection include:

The disease has been reported worldwide, but with a higher prevalence in countries with tropical or subtropical climate.

The fungal infection can last for a long time and the treatment ranges from long courses of antifungals to surgical excision of the lesion.

What are the Causes of Chromoblastomycosis?

Some of the fungi that cause the disease include:

A minor trauma on the skin due to a thorn prick or a splinter especially on the legs and feet can attract fungus from sources such as plants, wood and soil. This may not be noticed by the infected person for several months or years. However, the fungus continues to grow, eventually producing a reddish lesion called papule at the infected site. The papule may enlarge to form a nodule.

This red bump or nodule remains localized, but the infection can spread slowly to the surrounding tissues. The fungi also spread through blood and lymph giving rise to lesions at sites away from the site of infection. The nodules may become ulcerated and produce pus. Multiple nodules may grow and come together to form a single large mass and affect a large area of a limb.

What are the Symptoms and Signs of Chromoblastomycosis?

Patients do not report any kind of pain or discomfort during the initial infection. As the infection spreads, the nodules on the skin become evident.

The infected masses have been reported to appear in five different forms:

Nodular type: Nodules are soft, moderately raised swellings and appear pale pink or purple, with a smooth or scaly surface. These nodules may further grow into bigger lesions.

Tumoral type: Much bigger, protruding rounded masses that are divided into smaller lobes appear. These masses may be partially or completely covered with dirty-grey epidermal remains, scabs and scaly tissue. The disease is at its worst usually on the feet and lower parts of the shin where the masses become huge and have a typical cauliflower-like appearance.

Verrucous type: The outermost layer of the epidermis thickens and resembles common warts. These lesions usually occur along the edges of the feet.

Plaque type: This type of lesion is a rare form of clinical presentation. Simple lesions of various sizes and shapes occur, without the appearance of masses. These lesions may range from reddish to violet in colour and are scaly on the surface. 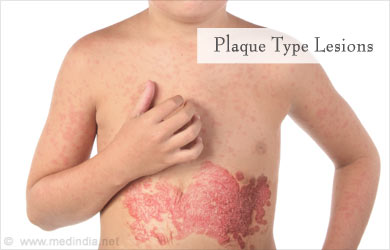 Cicatricial type: These are skin-level lesions, or sometimes depressed due to scarring after healing. These scarring tissues may cover substantial areas of the body.

The lesions are also very prone to complications such as bacterial infections, and may also result in lymphoedema (fluid retention and swelling caused by blockage of lymphatic duct) and ankylosis (rigidity of bones of a joint due to the bone tissues sticking together).

Clinical presentation of chromoblastomycosis is similar to other conditions like cutaneous leishmaniasis, mycobacteriosis and squamous cell carcinoma. The presence of the fungus can be confirmed by the following diagnostic tools. 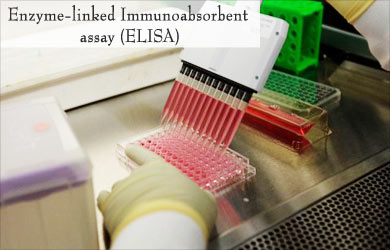 What are the Treatment options for Chromoblastomycosis?

Treatment for chromoblastomycosis has a low success rate and high relapse rate. The treatment process is determined by the extent, severity, size and the type of lesion.

The various treatment procedures that the doctors use to treat chromoblastomycosis include:

Oral medications: Medications used for the treatment of chromoblastomycosis include:

Topical applications of antifungal creams: Direct application of antifungal agents on the skin and lesions in the form of skin creams has shown to accelerate the treatment response, when used in combination with other treatment methods. Drugs like imiquimod and 5-fluorouracil have been found to be effective in reducing the inflammation caused by the infection and also prevent the spread of the infection.

Locally applied heat therapy: Heat can be applied in the form of hot cloth, hot water, heating pad, FIR heat therapy wraps, hydrocollator packs and many other ways and has been successfully used for smaller lesions.

Cryosurgery: The use of liquid nitrogen, an extremely cold substance, to destroy abnormal tissues has been found to be successful in the treatment of the lesions in chromoblastomycosis. Since cryosurgery is found to be effective for smaller lesions, the method is used in combination with medications. While the medications accelerate the healing and reduce the size of the lesions, cryosurgery can be used to destroy the remaining abnormal tissues. 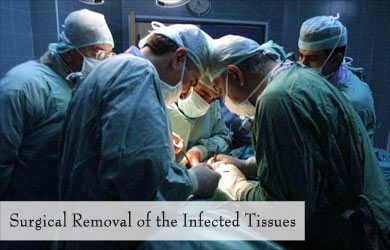 Laser vaporization: Irradiation with a laser beam to remove the lesions is a promising method of chromoblastomycosis treatment.

For small lesions, prognosis of chromoblastomycosis is very good. Although the fungal skin disease has not been fatal, in severe cases of infection, the disease is difficult to be cured completely.

Depending on the extent and area of the infected tissues, the persons ability to perform jobs may be affected.

Control measures and preventing further infection is the best way to keep the fungus at bay.

Latest Publications and Research on Chromoblastomycosis

MD
1 year experience
Venkateshwara med city , U turn before Redhills toll gate and hospital is on the left

Quiz on Rash Rashes are of varied types, color and texture. What causes a rash and what are its consequences? Learn more from this quiz on rashes. ...

Home Remedies for Nail Fungus Fungal nail infections, also called onychomycosis, can affect anyone regardless of hygiene. Here are a few natural remedies to treat nail fungus, which includes the use of herbs, nutrition, and dietary supplements.

Quiz on Psoriasis Psoriasis is a non-contagious, non-fatal disease but it can adversely affect one's overall quality of life including trouble with daily activities and social interactions. Take this quiz to find out more about this skin ...