Cholesteryl ester storage disease (CESD) is a rare inherited disease that results from the accumulation of lipids in the body. It occurs due to a deficiency of an enzyme called lysosomal acid lipase (LAL or LIPA) enzyme, which is involved in lipid metabolism. The enzyme is responsible for the breakdown of lipids and cholesterol in the lysosomes, which are components of cells that carry out digestion of various substances.(1✔ ✔Trusted Source
Rare Disease Database - Cholesteryl Ester Storage Disease

The incidence of CESD is considered to be 1 in 40 000. Both genders, males as well as females are affected equally. The liver is the predominant organ that is affected, resulting in liver dysfunction. Complete absence of the enzyme results in a condition called Wolman disease. The affected babies usually die within 6 months of birth.(2✔ ✔Trusted Source
Prevalence of Cholesteryl Ester Storage Disease

What are the Causes of Cholesteryl Ester Storage Disease?

As mentioned earlier, cholesteryl ester disease is a genetic disorder. It is caused by mutations in the lysosomal acid lipase (LIPA) gene located on chromosome 10.

Each of our cells has 23 pairs of chromosomes. The child gets one set of 23 chromosomes from the mother, and another set from the father, which form the pairs.

CESD is an autosomal recessive disorder. For a person to develop CESD, the defective gene should be present on both chromosomes 10, the one obtained from the father as well as the one obtained from the mother. If the gene on only one chromosome 10 is defective, the person does not suffer from the condition but can pass it on to the next generation. Such individuals are called carriers.

The LIPA gene codes for the lysosomal acid lipase enzyme. This enzyme is responsible for the breakdown of fatty material, such as cholesteryl esters. When the enzyme function is reduced, these unbroken fatty materials accumulate in organs and tissues causing various effects on the body, such as increased cholesterol, enlarged liver, heart attack, and stroke, among others.(3✔ ✔Trusted Source
Lysosomal Acid Lipase Deficiency 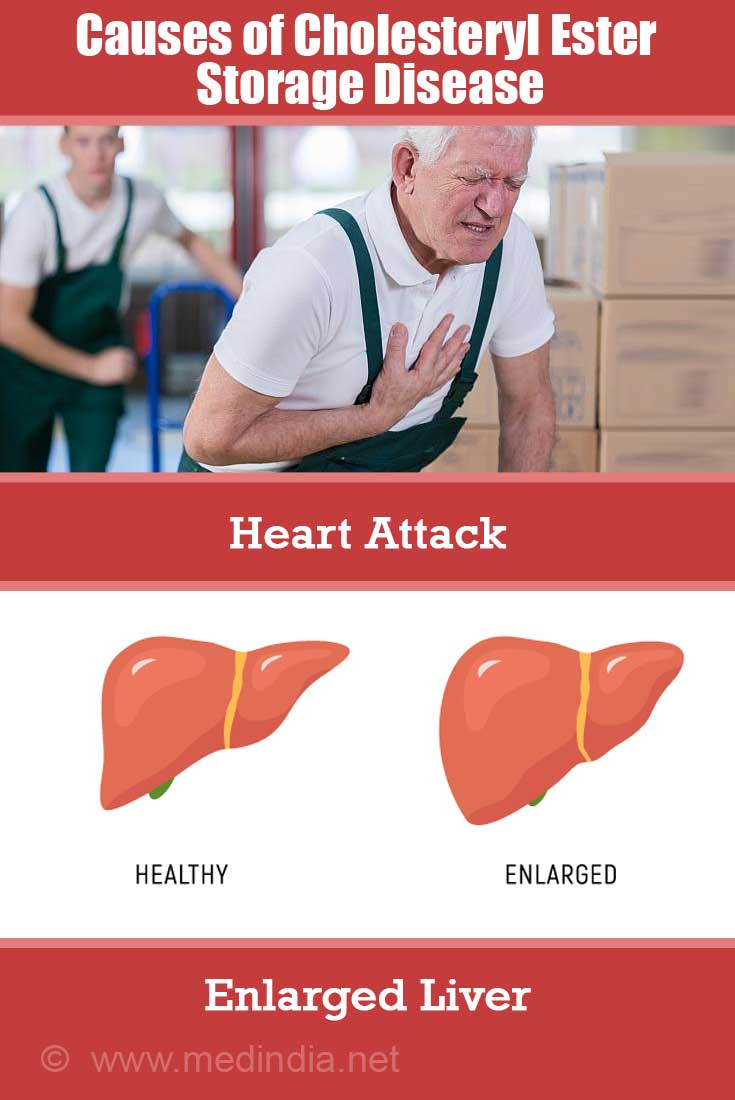 What are the Symptoms and Signs of Cholesteryl Ester Storage Disease?

The main features of CESD are enlisted below: 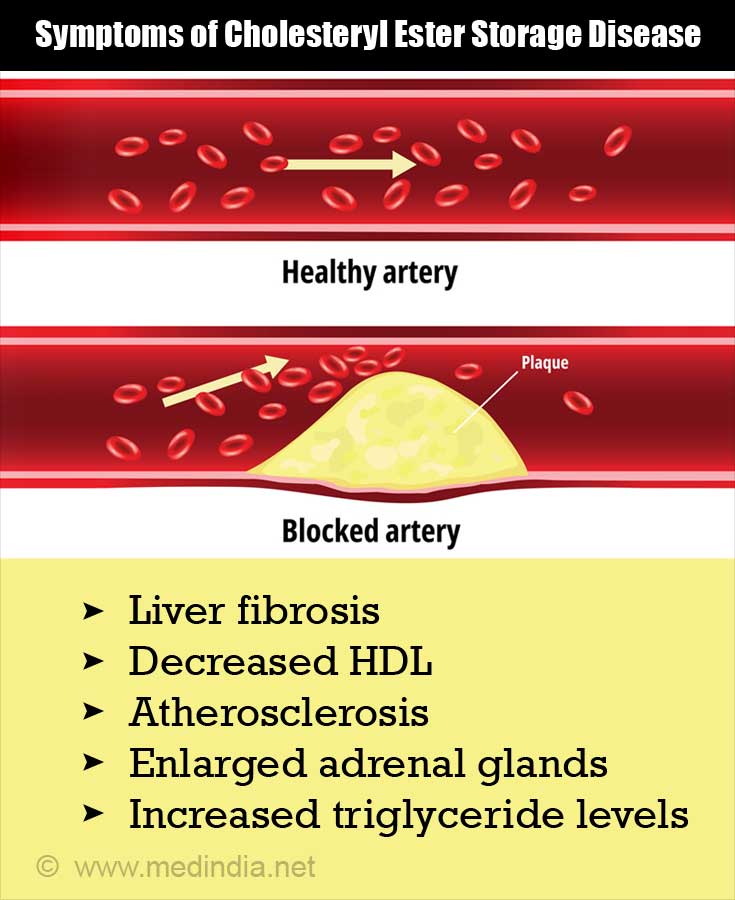 The diagnosis of Cholesteryl Ester Storage Disease involves taking a medical history of the patient. The patients family history is examined to assess any hereditary involvement. A physical examination detects familiar symptoms, such as an enlarged liver.

An MRI scan is useful to detect the buildup of cholesteryl esters. Enlarged liver or hepatomegaly can be detected with a CT or computed tomography scan. The calcification of adrenal glands can be detected with radiological techniques.(5✔ ✔Trusted Source
Lysosomal Acid Lipase Deficiency: Diagnosis and Treatment of Wolman and Cholesteryl Ester Storage Diseases

No specific treatment is present for CESD. The condition is treated with cholesterol reducing drugs, such as statins. Cholestyramine, fibrates, and ezetimibe can also be used to reduce cholesterol and triglyceride levels. A diet that is low in fats is also prescribed for the disease. When drugs and a low-fat diet are combined together, it causes a reduction in the levels of triglycerides and cholesterol in the body. However, even these treatments do not appear to affect the outcome of the disease.

Liver transplant is recommended for those with badly affected livers. Liver transplants have been shown to be effective, though the procedure needs to be performed based on several factors, such as the age of the patient, the degree to which the liver is damaged, the health condition of the patient, among others. 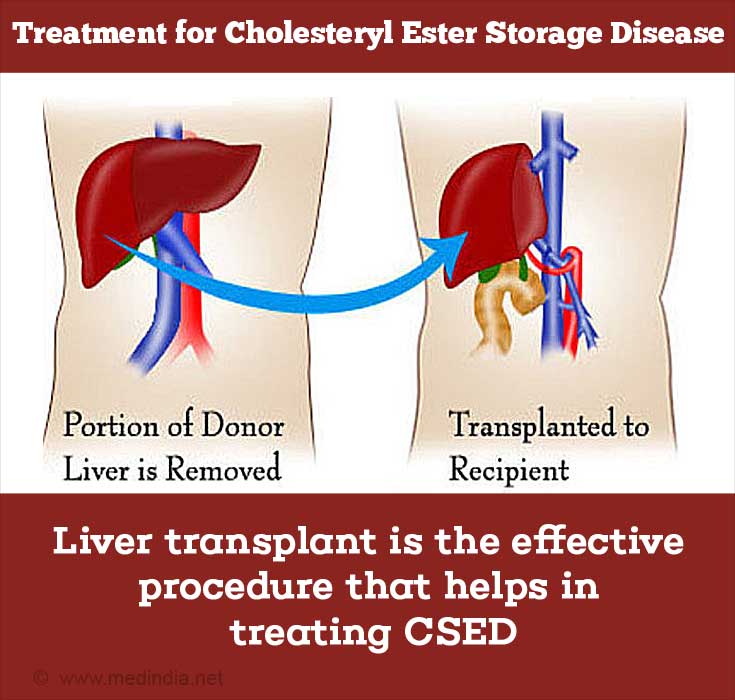 Enzyme replacement therapy is being explored as treatment for CESD. Modified LAL enzyme introduced into the body could possibly perform the function that is compromised with the mutated enzyme. Gene therapy is also being tried out, where a normal gene is introduced into the cells, which can produce the LAL enzyme.(6✔ ✔Trusted Source
Lysosomal Acid Lipase Deficiency/ Cholesterol Ester Storage Disease

Since CESD is a genetically inherited condition, individuals who have a family history of the condition should consider genetic counselling to understand the risk of transmitting the condition to their offspring.

People who already suffer from the condition should take medications along with a low fat diet.

Regular monitoring of the patient is necessary to diagnose and treat any manifestations early.

In Children With Inherited Disorder, Immunization Not Linked to Increased Hospitalization Children with inborn errors of metabolism received vaccines on the same immunization schedule as did healthy infants, according to Kaiser Permanente Vaccine Study Center scientists

'Dark Matter' of DNA Reveals Cause of Genetic Disorder New technology which analyses the whole genome to find the cause of a genetic disease in what was previously referred to as junk DNA , was used by scientists for the first time.