Chikungunya is a viral disease spread by the bite of infected Aedes Aegypti mosquitoes. It causes fever, severe joint pain and rash on the body.

virus (CHIKV) is an arbovirus i.e. it is an arthropod borne virus and is a member of the genus Alphavirus, in the family Togaviridae.

The first outbreak of the disease was seen in the year 1952, in the Makonde plateau, along the border between Tanzania and Mozambique. The disease occurs predominantly in Africa, Asia and the Indian subcontinent.

The disease was first described by Marion Robinson and W.H.R. Lumsden in 1955. The name Chikungunya is derived from a root verb in the Kimakonde language which means that which bends up and is in reference to the stooped posture that develops due to the arthritic symptoms of the disease.

Since the disease shares some clinical signs with fever, it can be misdiagnosed in areas where dengue is common.

There is no cure for the disease. It is a self-limiting infection and most patients recover fully. No deaths, neuro-invasive cases or cases related to chikungunya infection have been conclusively documented in the scientific literature.

Treatment of chikungunya is focused on relieving the symptoms.

Latest Publications and Research on Chikungunya 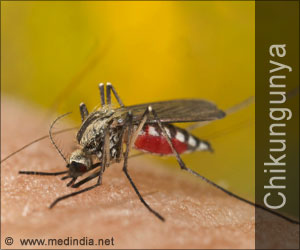