Chikungunya is caused by a virus that is transmitted by mosquito bite.

Chikungunya virus, also known as Buggy Creek Virus, is transmitted by Aedes aegypti mosquito bites. The virus belongs to the family-Togoviridae, and the genus is Alpha virus.

The aegypti mosquito, a household container breeder and aggressive daytime biter which is attracted to humans, is the primary vector of chikungunya infection to humans. Aedes albopictus may also play a role in human transmission in Asia, and various forest-dwelling mosquito species in Africa have been found to be infected with the chikungunya virus.

The transmission of the virus occurs mainly between mosquitoes and monkeys. Monkeys are the main virus reservoirs, but other species can also be affected, including humans. So far there is no evidence to indicate that there is a person-to-person transmission of chikungunya.

Genetic analysis of the Chikungunya viruses reveal that there are two distinct types of the virus- one contains all isolates from western Africa and the second comprising all southern and East African strains, as well as isolates from Asia. 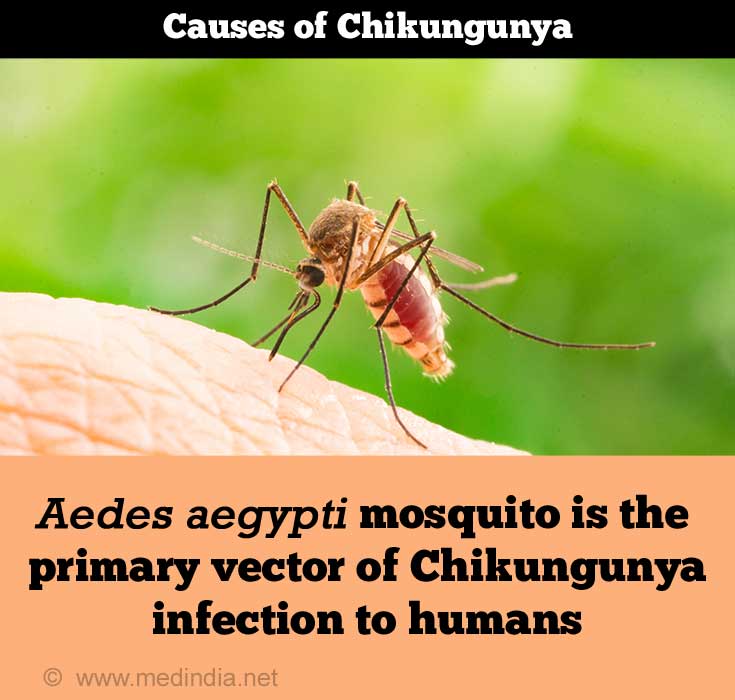 << About
Symptoms and Signs of Chikungunya >>