Impaired motor function in the child with cerebral palsy affects movements, gait and other daily activities in the individual.

An individual with cerebral palsy has impaired motor function. There are various ways of classifying the condition. The types of cerebral palsy can be based on severity level, topographical distribution (which part of the body is affected), motor function and muscle tone.

The classification of the condition based on motor function helps understand the characteristics and identify the areas of therapeutic intervention. Some of the types of motor function disorders in cerebral palsy are:

Spastic: The condition is characterized by increased muscle tone or tightened muscles. The muscles are contracted constantly and the limbs are rigid, stiff and do not relax or flex easily. Exaggerated reflexes and jerky and awkward movements are present. Not only the movements of hands and legs are affected, but also the vital processes of breathing and swallowing are abnormal as the muscles of the tongue, cheeks, pharynx and the larynx are also involved. 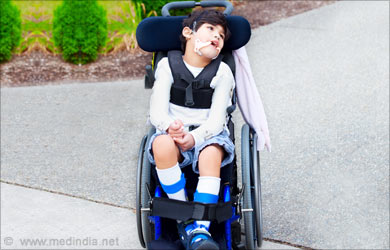 Almost 70% of individuals with cerebral palsy are spastic. The spasticity may also lead to painful joint deformities, scoliosis (abnormal sideward dislocation of the spine), hip dislocation and limb deformities.

The ability to maintain balance and posture is impaired affecting the gait, and control of eye movements and depth perception is impaired. Fine motor skills such as eye-hand coordination, as in writing are very difficult.

Non-spastic cerebral palsy, namely ataxic and athetoid types, have lower risk of joint and limb deformities, seizures or mental impairment. Since speech involves voluntary movements of muscles of the face, the persons ability to speak may be impaired.

Athetoid: This type of cerebral palsy is characterized by involuntary movement, especially in hands, arms and legs. Slow, writhing movements (that can be rhythmic, repetitive and sinuous), jerky and shaky movements, abnormal sustained posture or impaired balance and coordination are all symptoms that can exist in an individual with cerebral palsy, either in combination or in isolation. 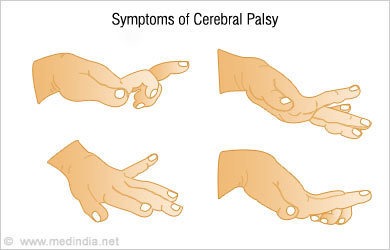 << About
Causes of Cerebral Palsy >>

Is Cerebral palsy affects all age groups ? can any one help me on this ?

Dysarthria Dysarthria is a condition characterized by speech difficulty due to poor or weak speech muscle control.

Rhizotomy - Surgical Procedure Rhizotomy is a surgical procedure that involves ablasing or cutting the sensory nerve roots. It is used in conditions like trigeminal neuralgia and cerebral palsy.

Scoliosis Scoliosis is a condition characterized by an abnormal curvature of the spine or backbone to the left or right side.
Sign up for Wellness Consult a Doctor Sign up for Selfcare
Advertisement
Health Topics A - Z
A B C D E F G H I J K L M N O P Q R S T U V W X Y Z