Poor oral hygiene, along with an untreated infection and inflammation of gums (gingivitis), causes periodontitis.

Poor oral hygiene is the key cause of gingivitis, and subsequently more severe periodontitis.

The bacteria in the mouth, along with mucus and other particles, constantly produce a sticky, plaque on teeth. Effective brushing and flossing must help in getting rid of the plaque. However, improper brushing and poor oral hygiene can cause accumulation of plaque that can eventually harden and form tartar. The bacteria in tartar produce toxins to cause inflammation of the gums, called gingivitis. 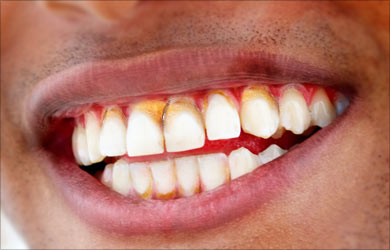 Periodontitis follows untreated or delayed treatment of gingivitis, the infection and inflammation of gums. The infection and inflammation, if left untreated, spreads from the gums (gingiva) to the periodontium, the ligament tissues and bone that surround and support the teeth. This causes loss of support to the teeth and they eventually become loose and fall out. Periodontitis is the chief cause of teeth loss in adults.

<< About
Risk Factors of Periodontitis >>

All this thanks to the tannin acids (astringent) naturally obtained from different quercus species evaluated and recognized as an effective substance against bleeding gums, inflammation and dental mobility in diabetic and non-diabetic patients.

Teeth Chart Do you know how many canines or molar teeth you have and what is their function? Find out from this interactive calculator.

Dental Anesthesia The advent of anesthesia may be regarded as a cornerstone in the development of modern dentistry.

Dental Implants Get rid of that toothless smile and go for those sparkling dentures! If traveling abroad for dental implant surgery consult us for affordable options.

Tooth Discoloration Tooth discoloration or staining is caused commonly due to smoking, some medicines and poor dental hygiene.

Loose Teeth Looseness of teeth is caused by a disease of the periodontium and includes the tissues surrounding the teeth.

Tooth Decay Tooth decay in toddlers, children and adults, also called dental caries, is a bacterial infection causing demineralization and destruction of the hard tissues of the teeth.

Oral Health And AIDS AIDS has taken on massive proportions in modern times. It is estimated that over 15 million people are suffering from the disease and many more are harboring the dreaded Human Immunodeficiency Virus (HIV).

Bleeding Gums Bleeding gums is a condition in which blood leaks from the gums and the spaces between the teeth. Gingivitis and periodontitis are the causes of bleeding gums which result in pain and swollen gums.

Mouthwash Just like toothpastes, mouthwash or mouth rinse has become a substantial part of our daily life, hence it is important to have certain knowledge about these oral hygiene products.

Oral Care Tips for Aging Teeth Good oral hygiene habits should be maintained as you age so as to prevent oral health problems and to have a healthy smile that looks great even during old age.
Sign up for Wellness Consult a Doctor Sign up for Selfcare
Advertisement
Health Topics A - Z
A B C D E F G H I J K L M N O P Q R S T U V W X Y Z