Medindia » Health Information » The Cabbage Diet - Efficacy of the diet

The Cabbage Diet - Efficacy of the diet

Efficacy of the diet

This is generally the first question asked by majority of people before starting the diet. As the case is with the cabbage soup diet, it is a temporary diet. Weight loss is achieved in a short period, but this diet cannot be continued for a longer duration due to absence of nutrients and calories.

In the short term most people would lose weight very quickly. However, the loss of weight will come from loss of water and muscle tissue not from fat reserves. The combination of foods "allowed" would force most people to nearly starve each day. This could actually be counter-productive, forcing the body into starvation mode will slow metabolism and encourage the body to hang on to fat reserves!

Talking about the nutritional value of the diet, the ingredients of the cabbage soup, in themselves, are mostly healthy - though if stock is used as well as soup mix the finished soup could be quite high in salt. Overall the cabbage diet is deficient in protein, carbohydrate and essential fats. Since the diet is only supposed to be followed for seven days, this shouldn't cause people in good health any long-term problems, but people, who have special dietary needs, including diabetics, should definitely consult a doctor before starting the cabbage soup diet. No one should follow the diet for more than seven days. 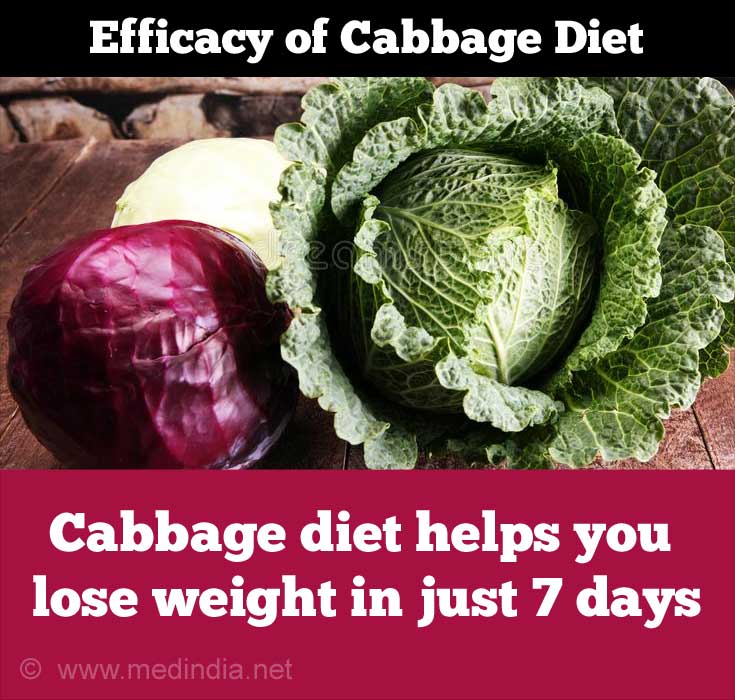 << The diet mandate
On a concluding note! >>

Who should avoid cabbage in their diet?

Cabbage is wonderfully high in nutrients, and could be considered the queen of vegetables. It's high in calcium and vitamin C in a very digestible form, as well as photo-nutrients that help prevent dementia and cancer. While the classic Cabbage Soup diet isn't the best thing to eat three times a day, Cabbage is a wonderful staple in any diet - especially if you are trying to lose weight, as it is so low in calories, and just packed with good food value.

what are the components of the soup ??

I would suggest that instead of using cabbage as the meal that you substitute it for snacks and perhaps one meal each day. I lost 20 pounds in one month in this way. And it was not water weight. I was also working out at least 3 days per week.

Calcium and Vitamin Supplements Calcium and vitamin supplements are taken to provide the body with the ''required'' nutrients. Calcium is a mineral found in many foods. Vitamins are very important nutrients for the body.

Daily Vitamin Requirement Chart Use this simple tool to calculate your daily vitamin requirement and get to know more about its functions, sources and deficiency symptoms.

Top Beauty Foods to Look Younger and Glowing Eating the right foods will enhance your beauty inside out. So, eliminate processed foods, refined sugars and artificial sweeteners and eat the foods that would detox your body and add to your beauty. Here's a list of these foods.

Fat-burning Diet Did you know that certain foods boost your metabolism and helps to burn the excess fat in your body? Incorporate these super foods in your daily diet and see the change.
Sign up for Wellness Consult a Doctor Sign up for Selfcare
Advertisement
Health Topics A - Z
A B C D E F G H I J K L M N O P Q R S T U V W X Y Z